Australian Olympians to be given COVID-19 vaccine priority 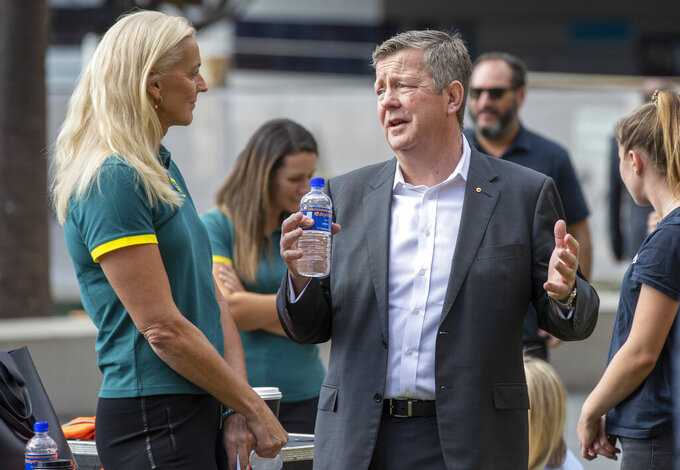 Matt Carroll, right, CEO of the Australian Olympic Committee, chats with former Australian Olympic beach volleyballer and gold medalist Kerri Pottharst at a ceremony to mark 100 days before the start of the Tokyo Olympics in Sydney Wednesday, April 14, 2021. Olympics live sites will be held across Australia during the Olympic Games, from July 23 to Aug. 8 2021, taking advantage of the one hour time zone difference for Australians to watch athletes perform. (AP Photo/Mark Baker)

SYDNEY (AP) — Australian athletes and support staff preparing for the Tokyo Olympics will be given priority for vaccines.

The Australian government announced after a special National Cabinet meeting that Olympic participants would be vaccinated under a priority group which includes health-care workers, Indigenous people aged over 55 and people older than 70.

The vaccination program for athletes and support staff will include about 2,000 people, including an estimated 450- 480 Olympic athletes, and could start as early as next week.

Richard Colbeck, the government minister for aged care, senior Australians and for sports, said the decision would not come at the cost of at-risk Australians.

“While vulnerable Australians remain an absolute priority as the vaccine rollout continues, National Cabinet understands the pressure our high-performance athletes have been facing as the Tokyo Games draw closer,” Colbeck said in a statement.

Some 1,969,337 vaccine doses have been administered in Australia, 205,203 of which were given in aged and disability care facilities.

Members of the Olympic contingent aged over 50 will receive the AstraZeneca vaccine, while those under 50 will be given the Pfizer vaccine.

Australian Olympic Committee chief executive Matt Carroll said the team would be vaccinated by a private provider “to ensure the vaccination of our athletes does not place any additional load on the public system.”

“It’s a weight off their minds — (athletes) know with a vaccination they’ll be safer from a health point of view and they’ll now be able to really concentrate on the games,” Carroll told the national broadcaster on Wednesday.

There was some public backlash to the overnight announcement, with critics saying healthy young athletes shouldn't get priority over scarce vaccination stocks ahead of more vulnerable citizens.

But with all Australians aged over 50 eligible for the AstraZeneca vaccine from next week, Carroll said vaccinating the Olympic contingent wouldn't create any big extra burden on the overall system.

Nearby New Zealand announced last month that athletes competing in events of national significance could get early access to a coronavirus vaccine.

Athletes traveling to Japan for the Tokyo Olympics will be required to stay within a “bubble” consisting of the official accommodation, venues and training areas and will be tested for the coronavirus before and during their stay, but there is no requirement to be vaccinated ahead of competition.

All travelers arriving in Australia must undertake a mandatory 14-day hotel quarantine, and there's a backlog in applications.

Carroll said with Australian Olympic participants vaccinated and athletes using charter flights, he's hoping to negotiate a bespoke 14-day quarantine program — similar to that used for tennis players and officials before the Australian Open earlier this year — that doesn't burden the public system.