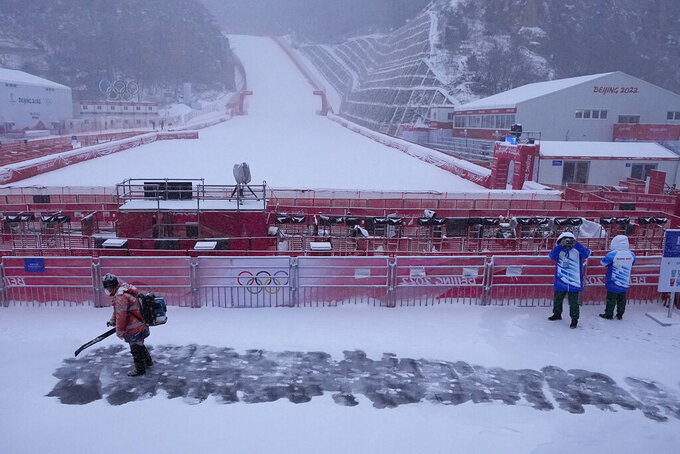 A worker clears snow from the stands in the finish area at the alpine ski venue at the 2022 Winter Olympics, Sunday, Feb. 13, 2022, in the Yanqing district of Beijing. (AP Photo/Robert F. Bukaty)

The journey from the heart of Beijing to the alpine ski venue is only about 120 kilometers (75 miles), but getting there via the Olympic transit system — hermetically sealed against COVID-19 — makes for a rather epic journey. And on Sunday, amid uncharacteristically heavy snowfall, a scenic one too.

Along the way, you pass from the flat urban sprawl of the capital into the steep, craggy mountains to its north, through numerous tunnels and past about a million signs bearing the ever-present Olympic panda mascot, Bing Dwen Dwen.

The trip begins with a bus ride from your hotel in central Beijing to the Main Media Center's bus depot, and from there on another bus to the Qinghe railway station, where you board a high-speed train. This silky ride passes suburbs, farms and endless orderly rows of newly planted trees, and lasts only about 25 minutes before arriving at Yanqing's modern train station. Not seen during Sunday's whiteout: a section of the Badaling Great Wall reportedly visible from the train on clearer days.

The station may be called Yanqing, but your journey at this point has really only just begun. Another bus deposits you at a forlorn parking lot on the side of a highway, where you wait for the next and final bus, which climbs into the mountains, through brightly lit tunnels and over vertiginous ravines before finally arriving at the National Alpine Ski Center.

Though one of the signature images of these Olympics has been the ribbons of white artificial snow contrasted against the area's brown, scrubby mountainsides, Sunday's natural snowfall transformed the whole area into a much more traditional alpine scene.

For a ski area purpose-built for these Games, the infrastructure is astounding, from the expansive base village to four gleaming gondolas, three of which are required to finally reach the finish of Sunday's men's giant slalom.

Despite all this investment, the ski area itself is unlikely to ever become a destination resort. This is because of the steep pitches of its slopes that are unsuitable for novice skiers, and its meager annual snowfall of around 5 centimeters (2 inches).

Sunday's storm, however, easily exceeded that amount, making for a race that was high on drama ... and low on visibility.