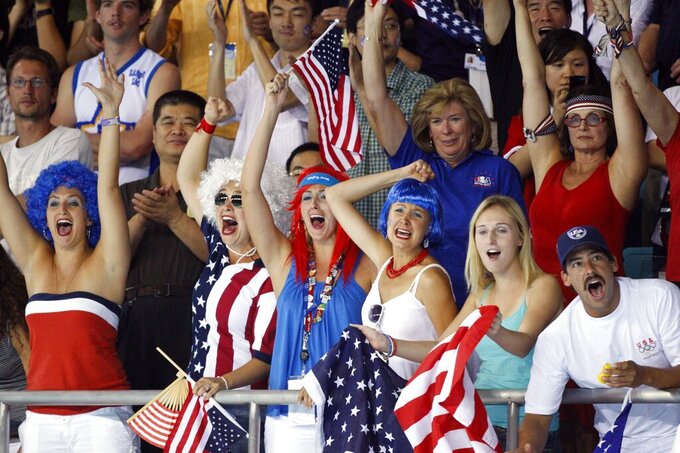 FILE - Fans cheer after a United States goal during their semifinal win over Serbia to advance to the gold medal match in the men's water polo at the Beijing 2008 Olympics in Beijing, Friday, Aug. 22, 2008. The Olympics are back in town 14 years later, but the atmosphere is much more subdued. Only a select few can watch the competitions in person because of the pandemic, and the 15,000 athletes, officials and others who have come for the Games have been kept completely separated from the population of Beijing. (AP Photo/Robert F. Bukaty, File)

Zhou Jun remembers the run-up to the 2008 Summer Olympics, when it seemed like everyone was learning English to be able to communicate with the foreign visitors about to descend on the city.

Athletes and foreign fans roamed the city throughout the Games. “I remember that the streets and alleys were filled with the theme song of the Beijing Olympics,” the 37-year-old said. “There were mascots everywhere. The atmosphere was very festive.”

The Olympics returned this year to a China that has changed in many ways, and the atmosphere has been much more subdued.

Only a select few can watch the competitions in person because of the pandemic, and strict COVID protocols are keeping the 16,000 athletes and other participants completely separated from the local population.

Like so many other things in this pandemic era, Beijingers are largely experiencing the Games on their smartphones, not much different from fans thousands of miles from the venues.

Lu Linjin remembers the excitement she felt in 2008, watching some of the world’s top volleyball teams. Now 34, she is keeping up mostly via short videos and livestreams — both of which did not exist the last time the Olympics came to China.

“I would love to watch the sporting events in person, but if doing so means that I’d have to be tested for the coronavirus, then forget it,” she said. “Even if I could be there, the atmosphere of the Winter Olympics during the pandemic is not the same. ... It’s a shame.”

The small number of Beijing residents who do get to attend Olympic events this year must take four coronavirus tests — two before and two afterward.

China and the world have changed in the 14 years since the 2008 Summer Games, when a buoyant Beijing was proud to host a major international event for the first time and eager to engage with the global community.

Now China finds itself at odds with many of the world’s major powers, engaged in disputes over trade, technology and territory. The government's record on human rights prompted countries including the U.S., Australia and Canada to stage a diplomatic boycott of the Games, refusing to send political officials to the opening ceremony.

China has also gone its own way on the pandemic, sticking with a zero-COVID strategy that includes sharp restrictions on entry to the country and requires those that do to quarantine in a hotel room for as many as 21 days.

To make that work for the Games, the government created a closed-loop “bubble” in which participants are forbidden from leaving their walled-off hotels and the bubble itself, other than to ride in special buses to the walled-off venues.

There are other reasons why this year's Games can feel all but invisible in parts of China's sprawling capital.

The Winter Olympics are generally less popular than the Summer Games, particularly in a country with less of a tradition in winter sports. And pandemic challenges aside, China no longer has to prove it is capable of pulling off such an event.

“This time, it’s our second time hosting the Olympics – we are now more composed and confident,” Zhou said.

In the smartphone age, many Chinese are turning to social media for their Olympic fix. Online discussions take place across a variety of platforms — the ubiquitous messaging app WeChat, on short-video platforms as well as Weibo, China’s equivalent of Twitter.

When China’s 18-year-old skier Eileen Gu won a gold medal in freestyle skiing, Weibo's servers became overloaded and the site crashed from the sheer number of users searching her name.

“In the past, discussions of these Olympics events were often one-sided, mainstream commentary, or just discussed among those around us, and they revolve largely around the matches or events,” said Ma Xueying, a 29-year-old resident of Beijing.

“But on social media now, there is a wide range of discussions over Eileen Gu’s win, or the popularity boom of (Olympics mascot) Bing Dwen Dwen,” she said.

The proliferation of social media and livestreams have made the events accessible. It's not the same as cheering on the home team in person, but it enables another kind of shared excitement.

“Particularly now when there are so many social-distancing restrictions, to be able to take part in an event and be able to post about it online, it makes it all the more real for many people,” said Nilanjan Raghunath, an assistant professor of sociology at the Singapore University of Technology and Design.

“Technology is evolving, and it gives people who cannot attend the opportunity to be almost there,” she said.

That hasn't stopped some from trying to feel the atmosphere. Crowds gathered a kilometer or more from the National Stadium to try to catch a distant glimpse of the fireworks at the opening ceremony. Hundreds have lined up overnight in below freezing temperatures for a chance to snag a figurine of Bing Dwen Dwen, the Olympics mascot that is in short supply.

Still, the lack of interaction with foreign visitors has intensified the sense that the Games are taking place several degrees removed from the daily life of the city and the nation. For most in the Chinese capital, outside of an occasional billboard and the security around the venues, life appears largely unchanged.