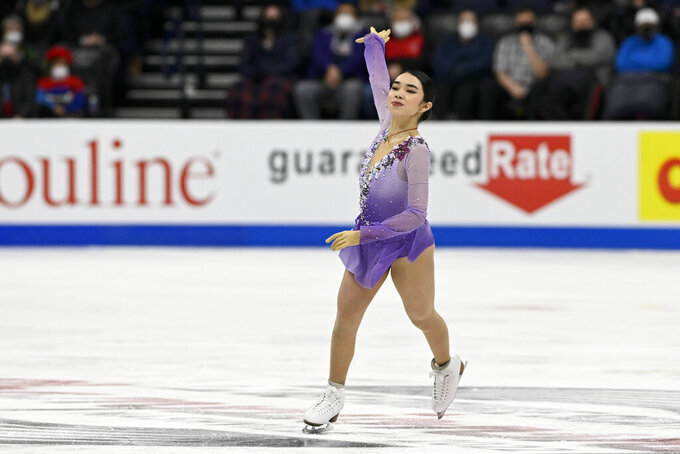 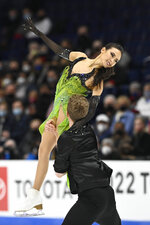 NASHVILLE, Tenn. (AP) — Mariah Bell had been to the U.S. Figure Skating Championships nine times without standing atop the podium.

She'd finished second once. Third a couple times. A disappointing fifth four years ago, when the ever-smiling Bell arrived at nationals as one of the leading contenders for the three-woman team headed to that year's Winter Olympics.

All those bitter disappointments made Friday night all the sweeter.

Putting together a mesmerizing free skate to k.d. lang's rendition of the Leonard Cohen staple “Hallelujah,” the 25-year-old Bell became the oldest skater in 95 years to win the national championship. And by edging the superlative Karen Chen for the gold medal, Bell likely locked up that long-awaited spot on the Olympic team headed to Beijing.

“There's definitely been some times when, I don't know, times are tough and you just want to call it quits,” Bell said. “It's really exciting to be a little bit older and showing you can do it at a young age and also an older age. I'm 25. It's not like I'm ancient. But in skating I kind of am. And I want that to be a known fact that skating doesn't end at a certain age.”

Bell narrowly led after a spectacular short program, but it took an equally incredible performance Friday night to hold off Chen's pursuit of a second title. Bell earned 140.70 points in her free skate and 216.25 points total, putting her nearly three points ahead of Chen and six ahead of 14-year-old bronze medalist Isabeau Levito.

Levito nearly stole the show in her senior nationals debut, piecing together an effortless series of triple jumps set to music from “Swan Lake.” But there was no stealing an Olympic spot — she's too young to compete in Beijing.

“I’m very excited because my goal was to medal, so I mean, here I am,” she said. “It was a good program.”

While Bell and Chen are locks when U.S. Figure Skating's selection committee announces the three-woman team on Saturday, the other spot is likely to go to Alysa Liu. The two-time national champion was third after her short program but had to withdraw earlier Friday following a positive test for COVID-19.

“Obviously that's unfortunate,” Bell said, “but this variant is really serious and people are catching it left and right, so it's unfortunate she couldn’t do the long program. But she’s had a great season to back her up.”

Still, the news of Liu's positive test — and one for Amber Glenn later in the day — left the rest of the skaters shaken.

“Definitely the news was very, very shocking, and super unfortunate to hear,” Chen said. “I gave myself, like, 10 minutes to freak out about it. That's my thing now. I tend to overthink and overanalyze. After that you have to focus on skating.”

2014 Olympian Gracie Gold wound up 10th, struggling in her free skate after finishing sixth in the short program.

Earlier in the day, Madison Chock and Evan Bates crashed through the smallest of openings created by training partners and friendly rivals Madison Hubbell and Zachary Donohue to win the rhythm dance competition.

Dancing to a medley of Billie Eilish songs, Chock and Bates were perfection on their curve lift, tightly in unison on their brilliant twizzles and brought down the house with their finishing step sequence to score 91.94 points — the highest score ever at nationals and more than two points higher than any posted during the Grand Prix season.

“It's a true testament to our training,” Chock said. “Since the Grand Prix final was canceled, we had more time to prepare than we would have and we took advantage of that, polishing and smoothing out the details.”

Hubbell and Donohue finished with 89.39 points to keep them within striking distance heading into Saturday’s free dance, which not only will decide the national title but also help with selecting the three-team Olympic squad.

“Even though there were little things, we didn't back off. We didn't let up,” said Hubbell, who along with Donohue were fourth at the Pyeongchang Olympics. “Crap happens and then other competitors skate very well, and it is what it is.”

The race for gold will be just as tight as the race for bronze and the final spot in Beijing. Caroline Green and Michael Parsons have 80.85 points and Kaitlin Hawayak and Jean-Luc Baker are only a point behind them in fourth place.

“We’ve gotten really good at focusing on what we can control. Our performance on the ice is something we're in charge of,” Parsons said. “There's a lot on the line for sure, but when we're in our program, we don't even think about it.”