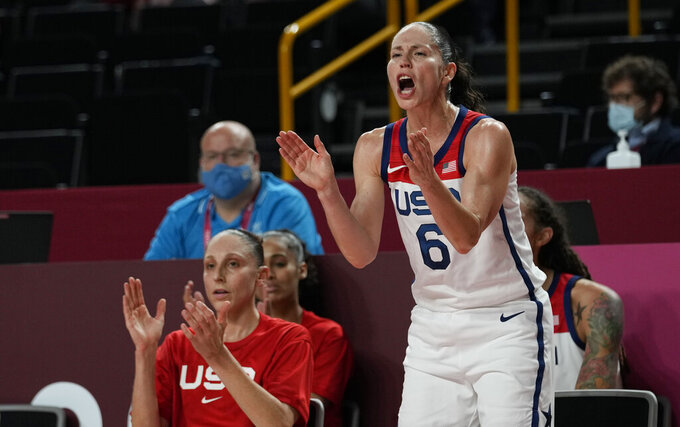 United States' Sue Bird (6) cheers for her teammates from the bench during women's basketball semifinal game between the United States and Serbia at the 2020 Summer Olympics, Friday, Aug. 6, 2021, in Saitama, Japan. (AP Photo/Eric Gay)

She hopes it will be with an unprecedented fifth consecutive gold medal when the U.S. plays Japan in the women's basketball championship game. Bird and her backcourt mate Diana Taurasi have been a huge part of the Americans' dominant run over the past five Olympics.

Taurasi hasn’t officially said she’s finished playing with USA Basketball, but it would be hard to imagine the 39-year-old guard competing on the world's biggest stage without Bird.

The pair stand together as the most decorated women's basketball players in Olympic history. They have surpassed former U.S. player Teresa Edwards, who won four golds and a bronze medal. Bird and Taurasi have never lost an Olympic game, going 37-0.

“It ends an incredible legacy here at the Games,” said U.S. coach Dawn Staley, who was part of the 1996 team that began the program’s current streak of six straight golds.

She was teammates with Bird and Taurasi in the 2004 Athens Games.

Bird has been “the top point guard in the world for a very long time. To see that end, it’s hard for us as her teammates, her coaches," Staley said. "And it’s extremely hard for the game of basketball, because she’s played it unlike any other guard across the world.

“To see that come to an end, you’re saddened by it. But at the same time, you had a chance to witness her greatness for a very long time.”

“It's rare to see two players linked like that for this long,” said their college coach Geno Auriemma, who also coached them in the 2012 and 2016 Olympics. “It's a testament to them and their longevity to keep their bodies and minds as sharp as they have. The level of respect the two of them have for each other is unmatched by any other two players."

They have deflected any talk about this Olympics being about them, but know with the history they are potentially making that it is tough to avoid the conversation. While they both are a step or two slower than their first few Olympics in 2004, the leadership they show on and off the court is unparalleled and most likely will never be matched.

“They’re doing a great job at keeping everything in check because the main thing is winning a gold medal,” Staley said. “I know they want to win their fifth and we want to win help them win their fifth. I think the cool thing about it is we’re treating it like any other Olympic games where we take one game at a time.”

Now there's just one game left against a team they beat by 17 in the preliminary round games. Japan coach Tom Hovasse said when he was hired 4 1/2 years ago that his team would be playing against the U.S. for the gold at the Tokyo Games — and would beat them.

He's completed the first part of the task, and he knows finishing it off won't be easy.

“It’s going to take the best game we ever played in our lives," he said after his team routed France in the semifinals. “Obviously a lucky bounce here or there. We need to be cooking on all cylinders from the jump to the end of the game. We have a shooter's chance.”

The U.S. has Bird and Taurasi.

The pair have a sister-like relationship. They both admit they've had a few arguments over the years with Bird saying they were usually about silly things.

“We may be mad for a bit, but a day or two later someone says sorry and we move on,” Bird said. “For the most part our arguing, we definitely disagree, but it's for the fun of it.”

There's no disagreements on the court, where they have a lot of fun together.

“I think everybody here wants to win gold for them, for us, for everybody that’s started this streak that got us here," said U.S. center Brittney Griner. "You know there’s a lot of different reasons why we want to win this gold medal. So I think you’re going to see some really good basketball in the gold medal game.”