Bogut retires, ending his bid for an Olympic medal 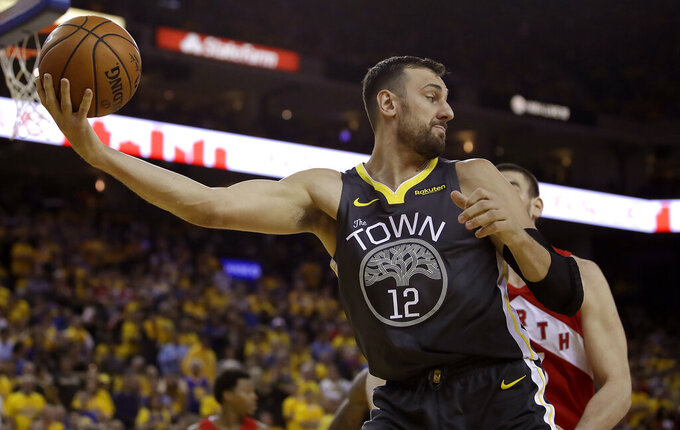 FILE - In this June 7, 2019, file photo, Golden State Warriors center Andrew Bogut (12) holds the ball against the Toronto Raptors during the second half of Game 4 of basketball's NBA Finals in Oakland, Calif. Bogut announced Tuesday, Dec. 1, 2020 that he is calling quits on his bid for an Olympic medal and has decided to retire after 15 years in professional basketball. (AP Photo/Ben Margot, File)

SYDNEY (AP) — Andrew Bogut is retiring after 15 years in professional basketball, with injuries, age and the COVID-19 pandemic ending his bid for one last shot at an Olympic medal.

The 36-year-old Australian had initially targeted a retirement date after the 2020 Olympics, but the postponement of the Tokyo Games to next year was a stretch too far. On Tuesday he made it official.

Bogut was the No. 1 draft pick by Milwaukee in 2005 and won an NBA championship with the Golden State Warriors in 2015.

“I just can’t physically and mentally get to 2021 with the way the body has been,” Bogut said on his “Rogue Bogues” podcast. “I mean, I could, on a lot of painkillers and with a lot of physical and mental anguish, but it’s just not worth it at this point in my career.”

Bogut played for Sydney in the National Basketball League the past two seasons, winning the NBL's MVP in 2019 and leading the Kings to a grand final last season, but was hampered by back and ankle injuries.

“The last two years have been a real challenge for me just to get out of bed in the morning some days, let alone go to a training session or a game,” Bogut said. “The body, probably from 2018 onwards, was hanging by a thread.

“It was real challenging and from the 2019-20 season that thread was completely frayed and in little pieces. It was real frustrating for me.”

Bogut played a key role in Australia’s fourth-place finish at last year’s World Cup in China and has been on the Australian team’s roster since the 2004 Athens Olympics.

The Melbourne-born Bogut was named The Associated Press college basketball player of the year in 2005 while playing for Utah, just before becoming the first Australian to be chosen No. 1 in the NBA draft.

“He is a revered and iconic Boomer and whilst he would have loved to joined the team in Tokyo his decision to step away is selfless in many ways," Australian Boomers head coach Brian Goorjian said. "His body has taken a toll, he knows it and it validates his team-first mentality as a legendary Boomer!”

The Australian Olympic Committee paid tribute to Bogut, who played at Athens in 2004, Beijing in '08 and helped the Boomers to fourth place at the 2016 Games in Rio de Janeiro. Bogut missed the London Olympics in 2012 because of injury.

“Andrew was so much more than a big man, he had an aura about him,” said John Coates, who leads the AOC and is a vice-president of the International Olympic Committee. “He was an inspirational figure for the Australian Olympic team and a leader on and off the court.

“This is not just a loss for basketball in Australia but a loss for the Australian Olympic movement. I know it must have been a difficult decision for him, but the great athletes know when it’s time."