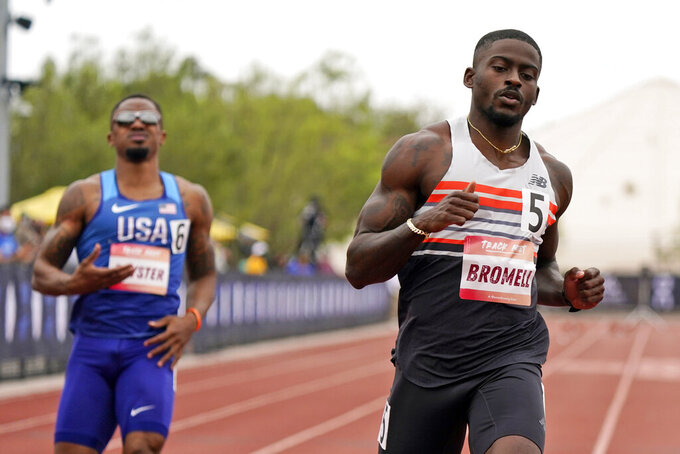 FILE - In this Saturday, May 15, 2021, file photo, Trayvon Bromell, right, wins the 100-meter dash during the Sound Running Track Meet in Irvine, Texas. Bromell is one of the favorites in a 100-meter field that includes Noah Lyles and veteran Justin Gatlin at the U.S. Olympic track and field trials. (AP Photo/Marcio Jose Sanchez, File) 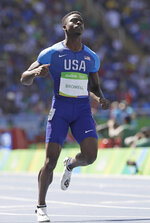 EUGENE, Ore. (AP) — This was shaping up to be a classic what-could-have-been sort of career for sprinter Trayvon Bromell.

Once step-for-step with the best in the world, including Usain Bolt, Bromell began experiencing issues with his left heel in the lead-up to the 2016 Rio Games. It led to two surgeries, countless hours of rehab and, in his darkest times, thoughts that he may possibly never be the same sprinter again.

Finally healthy, his career now resembles something else — a comeback story.

Now 25, Bromell feels back on track with that speedy version who was becoming a big name in the sprint game. He very well might be the one to catch at the rescheduled Tokyo Games this summer. But his first step will be this weekend at the U.S. Olympic track and field trials. He’s among the favorites in a 100-meter field that includes Noah Lyles and 39-year-old veteran Justin Gatlin.

“I beat all the odds against me,” said Bromell, who begins prelims of the 100 Saturday at renovated Hayward Field, with the final Sunday. “Because I’ve been through hell and back.”

As a kid, he had many brushes with injuries that threatened to derail his career before it really even took off.

In eighth grade, Bromell severely injured his left knee on a back flip gone wrong.

In ninth grade, he damaged his right knee while grabbing a rebound during a basketball game.

Pain, he can tolerate. But this heel issue just kept lingering.

It flared up before the 2016 U.S. Olympic trials. He was just a year removed from leaving Baylor — where he won two NCAA individual titles — and finishing tied for third at the 2015 world championships in a 100 race won by Bolt.

More of a nuisance than a hindrance, Bromell tried to keep racing through what was a bone spur, taking a little time off leading into those trials. He ran a 9.84 to finish behind Gatlin and make the Rio team.

At training camp in Houston before the Rio Games, he aggravated it again while working on handoffs during relay practice. He made it through the early rounds of the 100 in Rio but wasn't even sure he could step to the line final because of his heel. He did but finished eighth, 0.25 seconds behind Bolt's winning time of 9.81.

After gritting his way through the relays, Bromell went home and underwent surgery to remove the bone spur.

Then, another surgery for his heel/Achilles. Still, no progression.

Bromell began training with coach Rana Reider, who works with quite a few high-profile athletes including Andre De Grasse, the Canadian sprinter that Bromell shared a bronze medal with in '15 at worlds.

Steadily, the confidence began to return.

“We’re in the right spot,” Reider said. “He’s only in his mid-20s so this year is a good stepping stone to see what we can do.”

Safe to say he’s back?

“Until we make the Olympic team, I don’t even want to say that,” Reider said. “I don’t want to even use those words because it’s not his goal just to be fast. His goal is much bigger than that.”

There was time when Bromell perhaps used anger to provide a little extra fuel. Anger that his mom had to work 7 p.m. to 7 a.m. to make ends meet for the family growing up in St. Petersburg, Florida. Anger at a blue envelope that sometimes arrived in the mail to serve as a warning the lights might be cut off.

And maybe once, running with anger helped.

But not any longer. He let it go.

“Because if I would’ve continued to let that anger destroy me on the inside, it was going to release nothing but a rage of fire,” said the spiritual Bromell, who runs for New Balance. “I had to really reevaluate things and not just the years of my life through injuries, but everything.

“I’m big on energy. For us to be great, we have to realize self-evaluation and understand that we can be better.”

Bromell has put words into action. A little while back, he donated $10,000 to five kids to put toward their college fund — or any endeavor of their choosing. He awarded the funds based on essays.

Some even mentioned how his story motivated them. That hit home.

“I didn’t know a kid running the 100 meters could help,” Bromell said. “People who know my story know my life isn’t just track. I come from humble beginnings, got my butt up and went to college.”

These days, he's writing a new chapter to what was looking like a what-could've-been career.

“I’ve always been the type of person that loves challenges,” Bromell said. “It makes it fun.”