Camara wrestles after Guinea nearly pulled out of Olympics 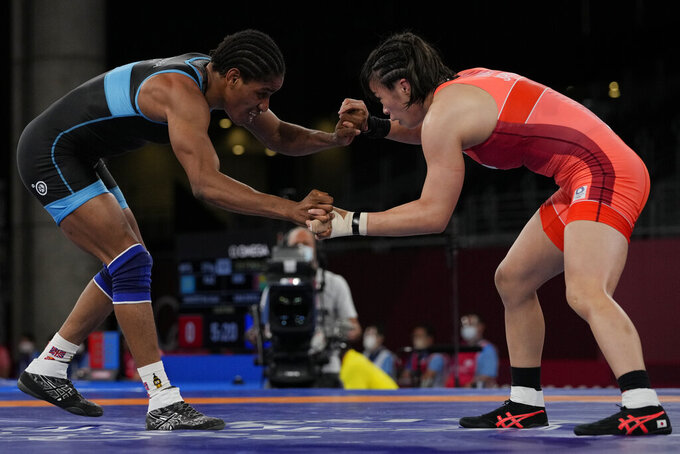 Guinea's Fatoumata Yarie Camara, left, and Japan's Risako Kawai compete during the women's 57kg freestyle wrestling match at the 2020 Summer Olympics, Wednesday, Aug. 4, 2021 in Chiba, Japan. Camara is the only Guinean athlete to qualify for these Games. (AP Photo/Aaron Favila)

CHIBA, Japan (AP) — Fatoumata Yarie Camara of Guinea is thankful she got to wrestle at the Olympics after the opportunity was nearly snatched away.

Camara worked hard to qualify for her first Olympics. But right before she was supposed to fly to Japan, the west African country's government withdrew from the Games, citing coronavirus concerns. Camara and others were skeptical about the reasons for the decision, saying they believed funds were mismanaged.

The government reversed its decision after an outcry, and Camara got to compete. She lost both her matches, but she gained valuable experience.

“She’s just so proud to serve her country during this Olympic year,” said Vincent Ake, her coach and a development officer for United World Wrestling.

She lost her opener 8-0 to 2016 Olympic gold medalist Risako Kawai of Japan on Wednesday.

“She met the best in the category, but she said she learned a lot because she tried to give her best to see what she can do, and she knows now she can do something,” Ake said.

She lost her repechage match 10-0 to Khongorzul Boldsaikhan of Mongolia on Thursday, ending her chances at a medal.

“She didn’t do so good today because she was a little bit tired,” Ake said. “But it was her first Olympics. She’s got so many challenges during this year. But she got here and that’s a good thing.”

Ake said Camara lost too much weight before the Tokyo Olympics and would be better at a higher weight class in the future. But now, there is more knowledge to build on.

Camara has overcome doubts in her country about whether women should compete in sports. Now that she has competed at the highest level, Ake hopes the path ahead is easier. Camara wants to return for the 2024 Paris Games with more support.

“As I told her, you get more experience, you need to go again and I hope that compared to all this (that happened before the Games), the country ... will try to support her,” Ake said. “This is really what I really think they ought to do. But of course, I will follow up and then I will continue the job to coach her and to give her more and more opportunities to grow again.”