Canada honors Burke on another great day on Olympic halfpipe 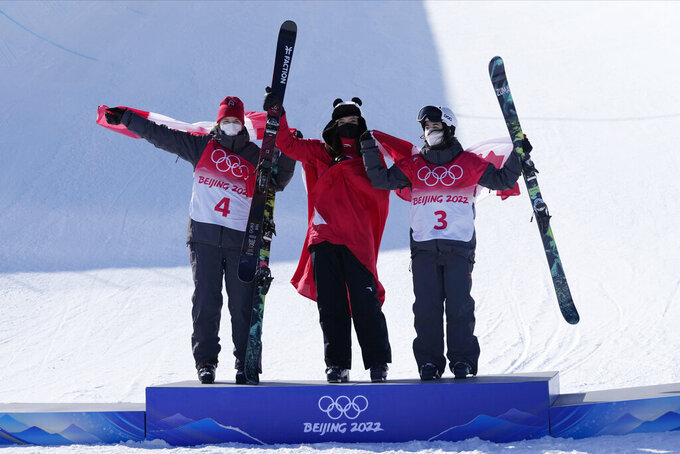 These halfpipe skiers know they're never alone up there. Another member of their Canadian family, the late Sarah Burke, is the reason they were given this chance.

That this sport is even in the Olympics, that Eileen Gu even had a chance for a second gold medal at the Games, is due in large part to the work of Burke, the Canadian freestyle icon who died in a training accident in 2012.

Her memory is never far from the freestyle skiing community, especially in her Canadian homeland, which now owns gold, silver and bronze Olympic medals in the event that Burke helped bring to the Games.

“She’s definitely here with us and the reason we are here,” said Sharpe, the 2018 Pyeongchang champion, who finished runner-up to Gu as Karker earned bronze. "It’s an honor to be on the podium and representing what she believed in.”

At Burke's urging, the International Olympic Committee added halfpipe skiing to the program in 2011 for a debut in 2014.

Less than a year later, the multi-time Winter X Games halfpipe champion suffered fatal injuries during a training run in the halfpipe. She was 29 and would have been the favorite at the 2014 Sochi Games. Before those Olympics, her parents and teammates spread Burke's ashes around the mountains and halfpipe in Russia.

For those from Canada, her presence is an everyday thing. At the team's wax cabin hangs a Canadian flag with Burke's name written across it.

“She’s always on all of our minds,” Canadian freestyle coach Trennon Paynter said. “She’s the reason these women are here doing this. This whole thing just feels like it’s a tribute to her and and it always will be.”

Her death left an unfillable void in the action-sports community that is still felt today. Before the women took to the halfpipe for the Winter X Games in Aspen, Colorado, last month, a moment of silence was held for Burke to mark the 10th anniversary of her death.

The performances by Karker, Sharpe and Gu on Friday were a different sort of tribute.

“She pushed the boundaries and she stood for everything that I stand for now," said Gu, who shares the same birthday with Burke, Sept. 3. "She was so ahead of her time. Her legacy will never fade because we all owe her so much, just to be able to be here today.”

After winning bronze, Karker was asked about Burke.

“Hell yeah, she would,” Sharpe responded.

No doubt, she would have appreciated a contest that saw Gu fly nearly 14 feet out of the halfpipe and pull off back-to-back 900s and back-to-back 540s — a pair of all-but-unheard-of combos — in her second run.

And no doubt, Burke would have loved watching Sharpe, who threw a pair of 1080s only a year after needing surgery to fix a torn-up knee that left her doubting whether she would even be able to defend her title.

“We all owe her so much, just to be able to be here today,” Gu said. “I know she championed for female extreme sports events to be in Olympics and the Winter X Games. To be able to see her legacy carried out in ways like that is very meaningful. Even though I never got to meet her, I definitely pay my respects to her. May she rest in peace.”