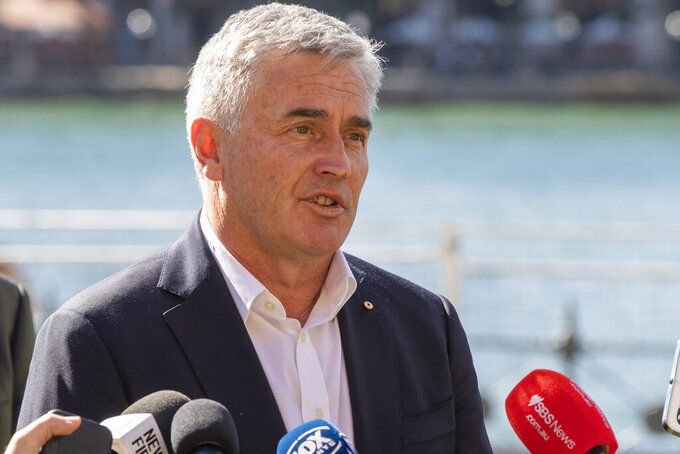 Coates was the official responsible for delivering two Olympic Games to Australia — the 2000 Sydney Games and the 2032 version set to be held in Brisbane. But he has relinquished his role following 32 years as president.

The 71-year-old Coates will remain as vice-president of the International Olympic Committee until 2024. IOC president Thomas Bach traveled to Sydney to attend the annual general meeting and speak at Coates' celebration dinner later Saturday.

Bach, who said no other Olympic official had delivered two Games to their home nation, said he had good and bad news in congratulating Chesterman.

“The shoes he has to fill in are huge,” Bach said. “This is also good news, because it also means he can build on a very solid base. John is leaving the AOC in a great state."

Chesterman was chef de mission of the Australian team at the 2020 Tokyo Olympics and six Winter Olympic teams. Stockwell was a member of Australia’s famed ‘Mean Machine’ relay swim team from the 1984 Games. in Los Angeles.

Chesterman has been a member of the AOC executive committee since 2001, while Stockwell, despite his three medals from the 1984 Games and long association with sports administration, was considered as an outsider for the top job.

There were a total of 93 votes from the eligible delegates, made up largely of nominated members from the sports federations on the program for the next Summer and Winter Olympics.