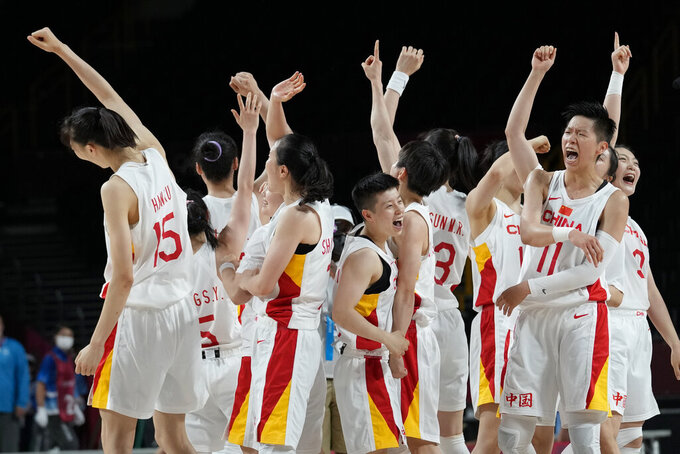 China celebrates their 76-74 victory against Australia after a women's basketball preliminary round game at the 2020 Summer Olympics in Saitama, Japan, Friday, July 30, 2021. (AP Photo/Eric Gay) 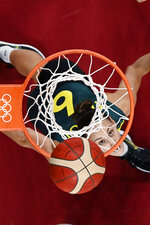 SAITAMA, Japan (AP) — Li Yueru hit two free throws with 0.6 seconds left, and China advanced to the Olympic quarterfinals by holding off a furious rally by Australia 76-74 on Friday night.

Cayla George fouled Li under the basket, and Li made both free throws to send the Chinese players running onto the court to celebrate.

With Yao Ming, president of the Chinese Basketball Association, watching from the bench behind the coaches, China (2-0) has a berth secured in the knockout round after opening Group C play routing Puerto Rico.

Australia, second only to the U.S. in FIBA's world rankings with five WNBA players on the roster, now is 0-2 with only one game remaining in pool play. The Opals, playing without WNBA star Liz Cambage, were routed by Olympic newcomer Belgium in its opener.

Stephanie Talbot, who plays with the WNBA's Seattle Storm, was back in the starting lineup for Australia after missing the Olympic opener with an injured foot. Early in the third quarter, she was walking along the end line and didn't play after halftime.

A collision in the first quarter sent Katie Ebzery to the locker room for stitches on her left eyelid, while Wang had her right forehead bandaged on the sideline.

Ezi Magbegor led Australia with 15 points. O'Hea finished with 11, and George had 10.