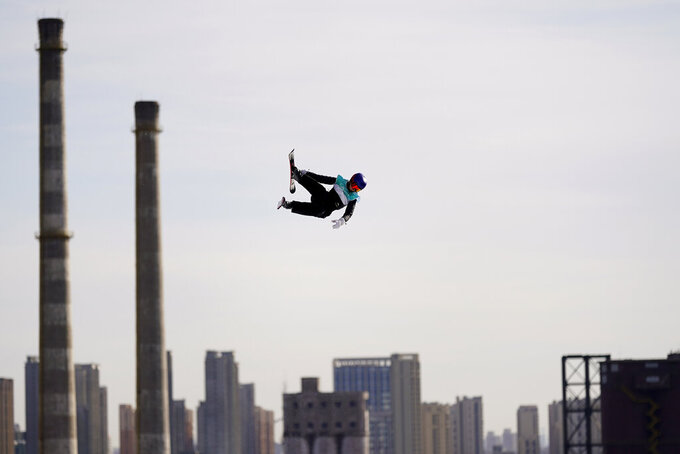 The American-born freestyle skier who spurned Team USA for China ahead of the Beijing Games risked missing the finals in women's big air Monday when she lost a ski on her second run and crashed into do-or-die position entering Round 3.

Gu scaled back her plans in the final round and put down a conservative right-side 900 — 2 1/2 spins while airborne on the 155-foot ramp — keeping the Olympics from a double-whammy of lost star power about an hour after American skier Mikaela Shiffren was disqualified in giant slalom.

Gu said the wind changed direction between her first and second runs. Because she was the fifth of 25 skiers down the jump at Big Air Shougang, she didn't notice the shift until she was midway through her first stab at the right-side 900. She landed awkwardly and lost a ski, putting all the pressure on run No. 3.

She gathered herself for a clean third run, and that score combined with a double cork 1080 on her first turn left Gu in fifth place — easily into the 12-skier finals field. Canadian Megan Oldham narrowly led Tess Ledeux of France for the top spot after Ledeux topped Oldham for gold at last month's X Games.

Gu's decision to ski for China has brought backlash on the former Team USA member. Her mother is from China, and the San Francisco-born and bred skier says she wants to be a role model for young girls in China who have not had many female athletes to look up to over the decades.

The big air venue at Beijing's Shougang Industrial Park — a repurposed steel mill that's become a sprawling space for sports and culture events — can seat nearly 5,000 but was less than a quarter full due to coronavirus measures. Gu got by far the biggest reaction, including a collective exhale and applause when she stomped down the 900.

Gu and her competitors expect to go much bigger for Tuesday's finals. Big Air Shougang — the world's only permanent, city-based big air venue — has drawn rave reviews from skiers in the men's and women's field, and several have pulled off tricks for the first time during practice.

Ledeux became the first woman to land a double cork 1620 at the X Games — which Gu skipped — and China's freeskiiing superstar hinted she's ready to match that.

Gu has victories over the past year in all three Olympic freeski events — big air, slopestyle and halfpipe — and is a contender to be the first action-sports athlete to win gold in three Winter Games events.

Birk Ruud of Norway launched to the top of men's qualifying with a switch triple cork 1980 mute and a double cork bio 1800 mute — the two highest-scoring tricks performed by anybody Monday. He said afterward he's hoping to push the triple cork to a 2160 — six full rotations — during Wednesday's final.

The 2160 — “spinning into the future” in skier parlance because it's the first spin number to outpace the current year — might be mandatory for gold. American Alex Hall landed the first sport's first 2160 in competition when he won X Games gold last month. Hall qualified in second place, with Oliwer Magnusson of Sweden third.

“People are going to be throwing down if the conditions are as good as they were today,” Hall said.