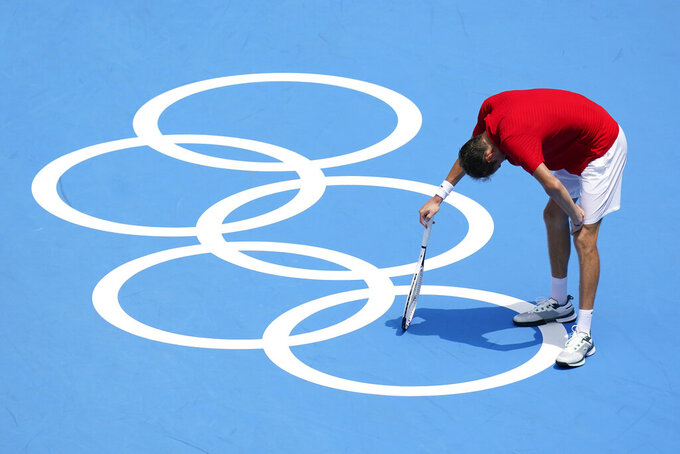 Daniil Medvedev, of the Russian Olympic Committee, pauses during a third round men's tennis match against Fabio Fognini, of Italy, at the 2020 Summer Olympics, Wednesday, July 28, 2021, in Tokyo, Japan. (AP Photo/Patrick Semansky)

Coe, a two-time Olympic champion, was speaking on the final day of the Tokyo Games. The extreme heat and humidity in Japan forced changes to the track schedule, as well as tennis and women’s soccer.

“You don’t have to be a devotee of climate change or a denier to know the world is getting hotter,” Coe said. “It probably will mean a global discussion around the calendar and how we stage events.”

In 2019, the men’s women’s marathons and race walks were moved from Tokyo to Sapporo in the hopes the northern city would have cooler temperatures. Sapporo, however, was also hot and Saturday’s women’s marathon was moved up one hour to 6 a.m. on the eve of the event.

Tennis and women’s soccer were also switched from morning start times under pressure from players concerned for their health.

Coe noted the stress on his staff of “having to create field hospitals and having your team spending a year thinking about little else other than how you are going to be coping with the welfare of the athletes.”

“Nobody wants to do that. That’s not what we came into the sport for,” he said, adding “we could well be confronting the same temperatures in Paris in 2024.”

In July 2022, the track world championships will be held in Eugene, Oregon, where a record heatwave raised temperatures to 108 degrees Fahrenheit (42 degrees Celsius) at the U.S. trials in June. Morning sessions were suspended.

The last world championships in 2019 were held in Qatar, scheduled for late September to avoid the summer heat. Next year’s soccer World Cup will open in November to again avoid the heat during the tournament’s traditional time slot.

At the 2019 worlds, the sight of runners failing to finish the marathons helped persuade the International Olympic Committee to change its plans for Tokyo for the long-distance races.

“The reality of it is, I think this a challenge we are all going to confront now,” said Coe, who is an IOC member.

“If you are going to be intellectually coherent here, we are going to have to have that debate,” Coe said, predicting sports bodies will be ”revisiting what is possible and probably having to be more adaptable in future.”