Column: Athletes can get in line for vaccines like everyone 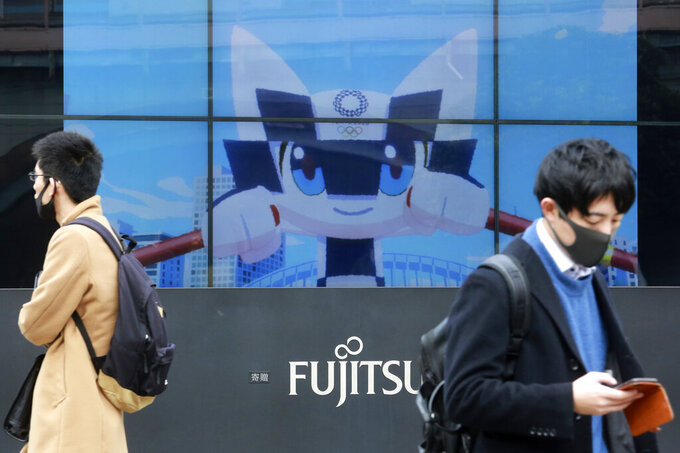 The world may yet gather in Tokyo this summer for an Olympics already postponed once because of the pandemic.

Listen to Olympic officials, and it’s almost a certainty. Thomas Bach made that clear Wednesday when he vowed that the Olympics would be staged in July and that this time there is no back up plan.

One other thing the president of the International Olympic Committee claims is certain: They won’t be stealing your vaccine shots to make the games happen.

Bach said Wednesday that the IOC was ``not in favor of athletes jumping queue’’ for vaccines, which he said should go first to health care workers and then to those in high risk of severe complications from Covid-19.

That’s comforting to know, assuming the IOC sticks to the commitment not to jump lines. It’s also a 180-degree turn from what another top Olympic official said a week earlier when quizzed on how the games could go ahead as planned in July.

Dick Pound, a Canadian and former IOC vice president, was tasked with floating the idea that getting athletes vaccinated early would pave the way for the games to begin July 23 as now scheduled.

“In Canada where we might have 300 or 400 hundred athletes — to take 300 or 400 vaccines out of several million in order to have Canada represented at an international event of this stature, character and level — I don’t think there would be any kind of a public outcry about that,” Pound told Sky News.

Pound’s trial balloon landed with a thud felt far from Ottawa, and with good reason. Imagine, if you will, the optics of healthy young athletes getting vaccines so they can play sports while older people desperately refresh their browsers to try and find shots so that they can hug their grandchildren.

Indeed, while sports leagues early in the pandemic secured testing that the general public couldn’t get, the line seems to have been drawn when it comes to getting the vaccine early. The World Health Organization is on record as saying athletes should not receive priority, and the major sports leagues aren’t pushing — at least publicly — to get theirs first.

Neither is the NHL, even if it means Canadian and American teams may not be meeting this season because of virus restrictions.

``We’re going to get in line with everybody else,’’ NHL commissioner Gary Bettman said earlier this month. ``There was never any thought about us jumping the line, or anything like that.’’

That’s good news for those anxiously awaiting inoculations. It’s also a reflection that the major sports leagues understand the vaccination line is the one line they can’t cross.

For nearly a year now, leagues have fought through the pandemic and crowned champions in major sports. The Super Bowl is just days away and somehow the NFL has done what seemed impossible for quite some time — make it through a season with all games played.

Still, imagine what a vaccine will mean to sports going forward. A vaccine that would allow the NBA and NHL to relax restrictions on both players and fans, and assure baseball players can go to spring training not having to worry every moment about the virus playing havoc with their health.

It will eventually happen, of course. Things may never be exactly the same as they once were but they will be close enough for the return of sports as we knew them — and hopefully soon.

For now, though, it’s a waiting game for the leagues, much like it is for everyone at home. They may not be refreshing browsers hourly to see if appointment times have opened, but rest assured they will be ready to pounce when it finally comes time for players to get their shots.

Meanwhile, there will be some fans at the Super Bowl — and in a stroke of marketing genius the NFL is inviting 7,500 vaccinated health care workers to be a part of the crowd, free of charge.

The vaccinations can’t come soon enough for everyone, sports included. We want the Olympics this summer in all its glory, just like we want baseball games played in stadiums before cheering fans.

But no one gets to cut in line.

Because that just wouldn’t be playing fair.