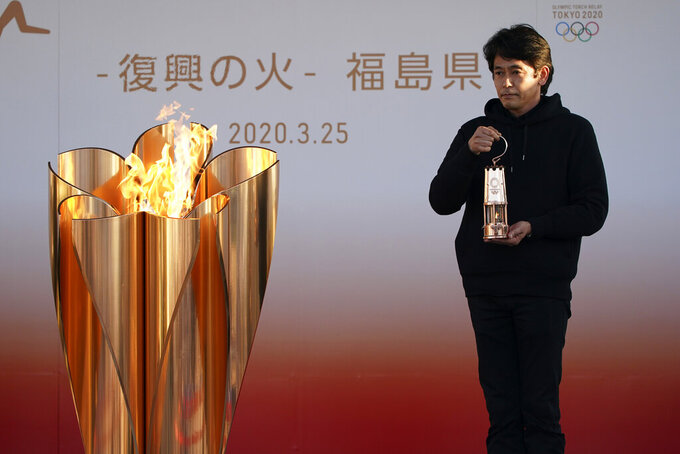 An official holds a lantern containing the Olympic Flame at the end of a flame display ceremony in Iwaki, northern Japan, Wednesday, March 25, 2020. IOC President Thomas Bach has agreed "100%" to a proposal of postponing the Tokyo Olympics for about one year until 2021 because of the coronavirus outbreak. (AP Photo/Eugene Hoshiko)

The chill of winter has melted away. The summer humidity is still a couple of months off. Maybe, just maybe, the famed cherry blossoms are still around, bathing the capital in dazzling colors.

Sounds like a pretty good time to have the Olympics, huh?

Now that the Tokyo Games are officially on hold until 2021, the next big issue that must be decided is when to reschedule this mammoth, 2 1/2-week-long event.

The International Olympic Committee says the Games will be held no later than the summer of 2021, which could mean simply pushing it back to roughly the same spot on the calendar as this year. The opening ceremony had been set for July 24, but those plans were officially scrapped Tuesday because of the worldwide virus pandemic.

While the postponement was a jarring, unprecedented decision, that might wind up being the easiest call for the IOC.

The suits in Lausanne face a much trickier issue in the next few weeks — nailing down exact dates for staging the Olympics so everyone can start adjusting their plans.

Cornel Marculescu, who runs the powerful FINA, overseeing international water sports, says the IOC is pondering two options: the normal window in the middle of summer and earlier spring dates, perhaps slotted right after the Masters golf tournament but before tennis' French Open.

That could mean, for instance, the opening ceremony on April 16, with the games running through May 2.

The various sport federations are likely to favor a spring date because it would cause less disruption to the 2021 summer sports calendar, highlighted by the rescheduled European men's soccer championship and world championships for two of the biggest Olympic sports: track and swimming.

If the Olympics are held earlier than usual, those events in Eugene, Oregon (track and field) and Fukuoka, Japan (swimming and other aquatic sports) could stay in their current slots.

But the biggest appeal of a spring Olympics is the weather.

Summers are hot in Tokyo, with temperatures climbing well into the 90s Fahrenheit (32 and above Celsius) accompanied by stifling humidity. Worries about the heat pushed the IOC to order the marathons and race walks moved to the northern Japanese city of Sapporo, despite angry opposition from local organizers.

There were also calls to shift open water swimming out of Tokyo Bay because of high water temperatures, though the IOC has insisted that no other sports would be moved.

If the Olympics were held in spring, the marathon could move back to Tokyo and there wouldn't be any worries about the humidity affecting any of the athletes competing in outdoor venues. And the cooler temperatures would make things more pleasant for the more than 1 million fans expected to attend.

Still, the idea of staging the Olympics in the spring comes with plenty of drawbacks.

“Think about all the sports you would be competing against at that time of year,” said Michael Phelps, who retired after 2016 Rio Games as the most decorated athlete in Olympic history. “You have these gung-ho Olympic fans who want to watch the game in the summer. What if ratings plummet because of a change they make?”

A spring Olympics would compete for U.S. television viewers against not only baseball, which would have just opened its season, but the NHL and NBA playoffs. Also, many major domestic soccer leagues around the world would be in the homestretch of their seasons.

The sport that would be hurt the most by a spring Olympics is basketball. Most NBA players would not be able to compete (except, perhaps, those whose teams didn't make the playoffs) and it would be a short turnaround from March Madness for many of the top men's and women's college players.

When taking the athletes' needs into consideration — which, of course, should be the primary goal though it rarely is — Phelps believes the games should be rescheduled for the summer of 2021.

“I think that's best way to do it,” he said. “Then the athletes actually have a full year to go back to the drawing board, figure out what they have to do between now and the trials. If you try to do it sooner, you're almost lost in limbo."

Rick Burton, a professor of sports management at Syracuse University, wonders if the Olympics could even be staged safely next spring.

“It would be impressive to kind of shoehorn something as big as the Olympics into March or April and not have it throw off the global calendars of the 33 sport federations,” Burton said. “But it's certainly a roll of the dice to believe that people may be able to attend sporting events a year from now, and that the athletes are going to be comfortable with one another in sports where there's physical contact.”

Tour de France champion Vincenzo Nibali, expected to be one of the favorites in Tokyo's cycling road race, said he'll be prepared for the rescheduled Olympics — no matter when that might be.

“The postponement of a year does not change my aspirations," said the Italian rider. “From now on, I can say that I will plan my preparation to arrive at the event in the best condition possible.”

Kudos again to the IOC for making the prudent call to postpone the games.

“I'll be ready for whatever date they name,” Murphy said. “I really just hope the games can move forward like we've always known it to be."

Paul Newberry is a sports columnist for The Associated Press.Write to him at pnewberry(at)ap.org. Follow him on Twitter at https://twitter.com/pnewberry1963 and find his work at https://apnews.com