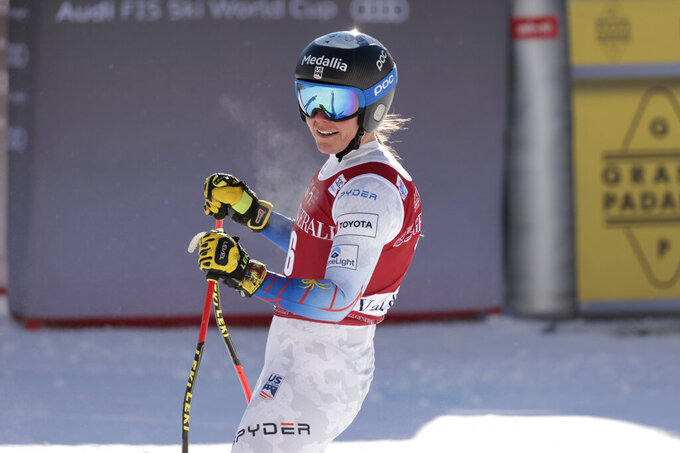 Johnson, who has been runner-up in all three World Cup downhills this season, said Friday she has taken medical advice over a cut and bruised knee from a training crash this week.

“I feel great and ready to go,” the American wrote on Instagram from Austria. “But my medical team feels that I will be safer if I wait until Cortina.”

Johnson will miss a downhill on Saturday and a super-G on Sunday at Altenmarkt-Zauchensee. The same races are staged on the two remaining weekends in January at Cortina d’Ampezzo, Italy and Garmisch-Partenkirchen, Germany.

At the Beijing Winter Games, Johnson’s main medal target is the downhill on Feb. 15.

The enforced break will stop the run of 2018 Olympic champion Sofia Goggia and Johnson finishing 1-2 in each World Cup downhill this season.

Johnson, who turns 26 next week, was seeking her first World Cup win after seven podium finishes in downhill in the past 13 months.

She wrote on Instagram “though it hurts my heart more than my knee to follow (the medical team’s) advice, I know that they know what’s best for me.”