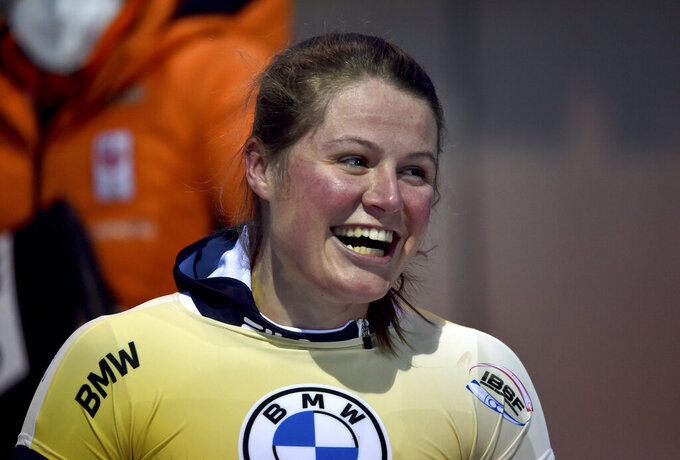 Kimberley Bos from the Netherlands smiles after her first place in the women's skeleton world cup in Winterberg, Germany, Friday, Jan. 7, 2022. (Caroline Seidel/dpa via AP)

Dukurs and Bos cemented their status as gold-medal favorites at the Beijing Olympics by finishing off World Cup skeleton overall season championships on Friday — the 11th for Dukurs, the first for Bos. Dukurs capped his title with a win in the season finale, and a second-place finish by Bos in the women’s race was more than good enough to clinch her title.

“This is super cool,” said Bos, the first athlete from the Netherlands in any sliding sport — bobsled, skeleton or luge — to win a season-long World Cup title.

Dukurs got his 11th championship in the last 13 seasons.

Jaclyn Narracott of Australia got her first World Cup medal in the women’s race, posting the fastest time in the first run and holding on in the second to win in 2 minutes, 17.56 seconds. Bos was second in 2:17.62 and Mirela Rahneva of Canada was third in 2:18.22.

For the U.S., Kelly Curtis led the way with a career-best sixth-place finish — which would appear to be good enough to get her a spot on the U.S. Olympic team that will be announced Saturday. Katie Uhlaender was ninth, likely sealing up her fifth Olympic berth, and Megan Henry was 15th.

Bos ended the season with 1,600 points, medaling in six of eight races. Austria’s Janine Flock was second with 1,481 points and Russia’s Elena Nikitina was third with 1,458.

Dukurs got his 61st career World Cup win by finishing in 2:14.39, holding off German sleds that took the next three spots. Alexander Gassner was second in 2:14.84, Christopher Grotheer third in 2:14.90 and Axel Jungk fourth in 2:15.04. Russia’s Nikita Tregubov tied Jungk for that fourth-place spot.

Austin Florian was 18th for the U.S., and Andrew Blaser was 26th.

The Beijing Games are the final races of the season for skeleton. Many national teams will finalize their Olympic rosters in the coming days.