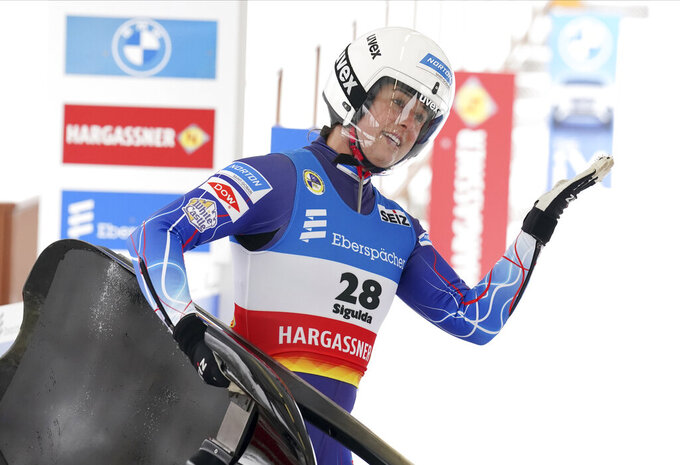 SIGULDA, Latvia (AP) — Austria’s Madeleine Egle and Russia’s Tatyana Ivanova both picked up a pair of World Cup medals Sunday, each winning a gold and a bronze.

Egle trimmed 30 points off Taubitz’s lead in the season-long overall standings with three races remaining. Taubitz has 834 points through 10 races; Egle has 762.

Both will be among the Americans nominated to the U.S. Olympic team by USA Luge on Monday.

Latvia has never had a World Cup luge overall champion. The Sics brothers are in position to change that.

The U.S. got an eighth-place showing after a huge finish by Dana Kellogg and Duncan Segger. They had the 14th-fastest start in the 15-sled field, then found tons of speed toward the bottom of their run. Only five of the 15 sleds broke the 70 mph (113 kph) mark during the race, and the Kellogg-Segger sled was one of them.

Loch’s first victory of the season moved him into fifth place in the season-long standings, despite missing two races for COVID-19-related issues.

Fischnaller and Aparjods are now tied for third in the overall standings with 567 points apiece, behind Germany’s Johannes Ludwig (737) and Austria’s Wolfgang Kindl (636) with three races left.

The International Luge Federation will announce the nations that qualified sleds for the Beijing Olympics — and how many each nation gets to bring to China — early this week.

The World Cup circuit moves to Oberhof, Germany next weekend.