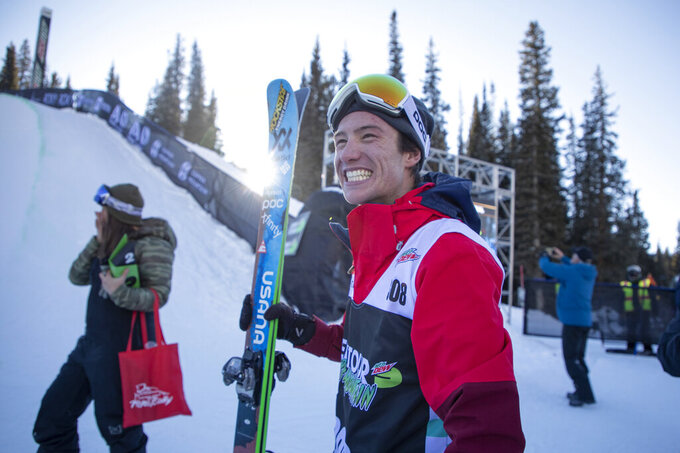 Alex Ferreira, of the United States, interacts with fans after his first-place finish in the halfpipe finals, Saturday, Dec. 18, 2021, during the Dew Tour freestyle skiing event at Copper Mountain, Colo. (AP Photo/Hugh Carey)

COPPER MOUNTAIN, Colo. (AP) — Alex Ferreira joked that all the spins in his winning run of the men's ski halfpipe final left him feeling dizzy.

This might straighten things out for Ferreira: He's a virtual lock to make the U.S. Olympic team for the Winter Games in Beijing. The silver medalist in Pyeongchang now has back-to-back wins in back-to-back competitions in the same Copper Mountain halfpipe.

The 27-year-old Ferreira is firmly in the driver's seat to make the U.S. team with three qualifying events remaining. Not that he's viewing the situation in that prism.

“Let’s just keep skiing and see where it takes me,” Ferreira said.

Wise knows the road ahead will be tough. When he finished his final run, he looked toward the crowd and uttered: “What do you think?” It wasn't enough to wind up on the podium.

“This is going to be the hardest team to make,” Wise said in between runs. “It's never been easy. I've got my work cut out for me.”

Ferreira, who's from Aspen, has made himself right at home in Copper Mountain. He won the event during a U.S. Grand Prix stop last week.

“This year might just be my year here in Copper,” Ferreira said. “So I’m very grateful and thankful to land a couple of good runs out here.”

Blunck feels a step closer to Beijing with this result.

“But at the end of the day skiing to me is just skiing and the Olympics aren’t what I ski for. I ski for the fun of it,” said Blunck, who's from Crested Butte. “It feels nice, but at the same time, I’m going to keep it going and just keep having fun.”

The most drama-packed event of the day was the men's snowboard slopestyle competition with Olympic champion Red Gerard winning on his last run. He edged teammate Chris Corning and Mark McMorris of Canada took third.

In the women’s snowboard slopestyle event, the day belonged to New Zealand’s Zoi Sadowski Synnott, who increased the degree of difficulty each run through the course to take the title.

It wasn’t the day for two-time Olympic champion Jamie Anderson as she struggled to put together a complete run. On her final attempt, Anderson didn’t get enough rotation on a flip and crashed. Anderson was seventh.

Missing from the field was Austrian standout Anna Gasser, the defending Olympic champion in big air, who withdrew moments before the start of the event. Enni Rukajarvi of Finland was second and Japan's Kokomo Murase third. Courtney Rummel was fourth to record the top finish among the Americans.

“I honestly have no words. I’m so excited about it,” Rummel said. “It gives me the extra confidence boost.”