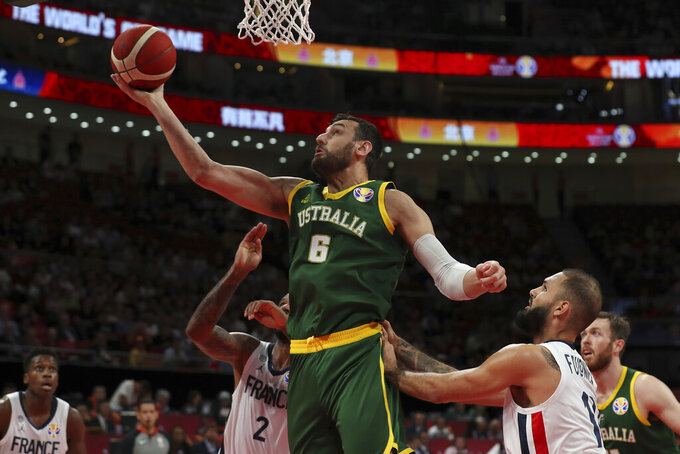 FILE - In this Sept. 15, 2019, file photo, Andrew Bogut of Australia puts up a shot over Amath M'Baye, left, and Evan Fournier of France during their third placing match for the FIBA Basketball World Cup at the Cadillac Arena in Beijing. NBA veteran Bogut says players were “used like pawns" in the process that led to his Sydney Kings refusing to fly across the country for Game 4 of the Australian league's finals series because of the coronavirus pandemic, a decision that ultimately handed the championship to Perth. For most people, the new coronavirus causes only mild or moderate symptoms. For some it can cause more severe illness. (AP Photo/Ng Han Guan, File)

After 15 years in professional basketball, Andrew Bogut is close to making a decision on when to end his career. The new coronavirus and subsequent postponement of the 2020 Olympics in Tokyo isn’t making it any easier.

The 35-year-old Bogut, a 2005 No. 1 draft pick by Milwaukee and who won an NBA championship with the Golden State Warriors in 2015, was planning to retire after playing for Australia at the Tokyo Games in three months. Those games have been delayed until July 2021.

But Bogut, who has played for Sydney in the National Basketball League the past two seasons, isn’t sure he can take the training and discipline needed to go another year.

“I’m not doing much, I can tell you that,” Bogut told the Australian Broadcasting Corp. Offsiders program aired on Sunday. “To be able to kiss your kids goodnight and put them down every night ... I’ve appreciated doing that.”

“I haven’t done any basketball since the season ended and it feels good waking up, getting out of bed and not feeling like I’m walking on glass,” Bogut said. “It’s (my career) all been thrown into a washing machine essentially ... but there’s a decision to be made probably by mid-May.”

Bogut, who played a key role in Australia’s fourth-place finish at last year’s World Cup in China, has been on the Australian team's roster since the 2004 Athens Olympics.

The Melbourne-born Bogut was named The Associated Press college basketball player of the year in 2005 while playing for Utah, just before being chosen No. 1 in the NBA draft by the Bucks.

The World Cup fourth-place finish for Australia came without NBA all-star Ben Simmons, who could play for Australia at Tokyo in 2021. Bogut hopes Simmons is in the squad, but whether Bogut is there to partake in the experience is still up in the air.

“We’ve been tantalizingly close and the squad we’re going to have is arguably going to be the best squad in the history of the Boomers, on paper at least,” Bogut told the ABC program. “To be part of that, selfishly, is something I really want to do, but the body is what it comes down to.

“I can get up for a basketball game any day of the week, but it’s hard to get up for five, six days of training a week and lifting weights.”

Bogut has never been one to hold back on his opinions. After his Sydney Kings refused to fly across Australia to play the Perth Wildcats in the fourth game of the five-game NBL finals because of the coronavirus, a series the Kings trailed 2-1, the NBL awarded the title to Perth. Bogut said the players were “used like pawns” in the process.

He's also had some dust-ups with players and officials on Twitter, including fellow Australian and WNBA star Liz Cambage. But this past week in virus-forced isolation, he was more concerned with the location of his television remote.

Could he be mellowing close to a potential retirement?

“OK, a TV remote has been lost. I have a 2 year old and 3 year old. Turned whole kitchen and lounge room upside down. Any guesses to where else these hoodlums could of “placed” the remote," he first tweeted.