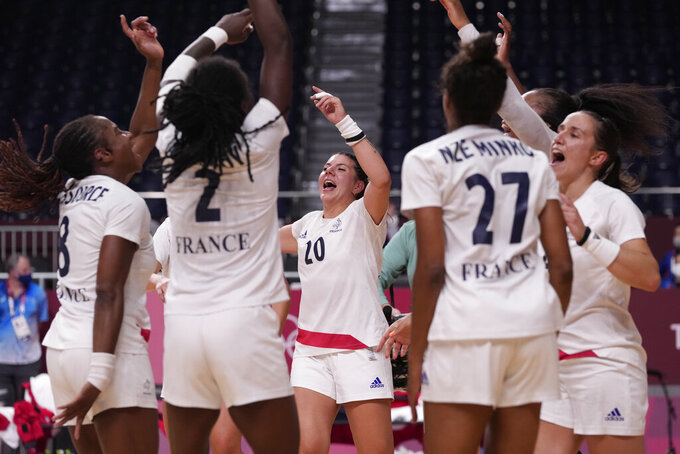 France won the women's handball gold medal at the Tokyo Olympics on Sunday to become the first country in 37 years to win both men's and women's tournaments — five years after losing both finals.

France beat the Russian team 30-25 in the women's final with the men's players cheering on a day after they beat Denmark. Both finals were rematches from 2016.

“We have a lot of emotions here. We are happy, excited also, we just want to cry because it was really hard for us in this tournament," French left-back Kalidatou Niakaté said. "It was really hard emotionally also, and we are far from France since two months.”

The score was level at 16-16 midway through the second half before France scored six unanswered goals and had a string of saves by goalkeeper Cleopatre Darleux. Pauletta Foppa and Allison Pineau had seven goals each, and so did Russian player Polina Vedekhina.

Darleux's finished with nine saves off 21 shots and the other French goalkeeper, Amandine Leynaud, had three off 15. The Russian team's goalkeepers combined for five off 35.

France is the first country to win both handball events at the same Olympics since Yugoslavia at the 1984 Los Angeles Games. The French women's team had never won a medal before 2016 but has developed into one of the sport's major powers over the last decade.

“We during all the competition just believed in us and kept going, continued to work," right-back Oceane Sercien Uoglin said. “It was just like a spirit.”

She credited a stronger French women's league and more experienced coaches for raising the standard of the game at home.

Russian left winger Polina Kuznetsova said the strain of a 27-26 win over Norway in the semifinals took its toll in the final but also said the team was running on empty because of overly intense training before the tournament.

“We didn't just have the physical or mental energy,” she said.

Even reaching the final was an achievement for the Russians after failing to win either of their first two games of the tournament — a tie with Brazil and 12-goal loss to Sweden — amid vocal criticism from the former coach who won gold in 2016.

Former coach Evgeny Trefilov was in the stands throughout the tournament in a “consultant” role after stepping down in 2019 for health reasons. Early in the tournament he even called out his own instructions, complicating matters for the coaching team on the sidelines.

Norway matched its women’s bronze from 2016 with a 36-19 win over Sweden. Nora Mork and Kari Brattset Dale scored eight goals each.