Freestyle skier takes time to reflect each May 8 after crash 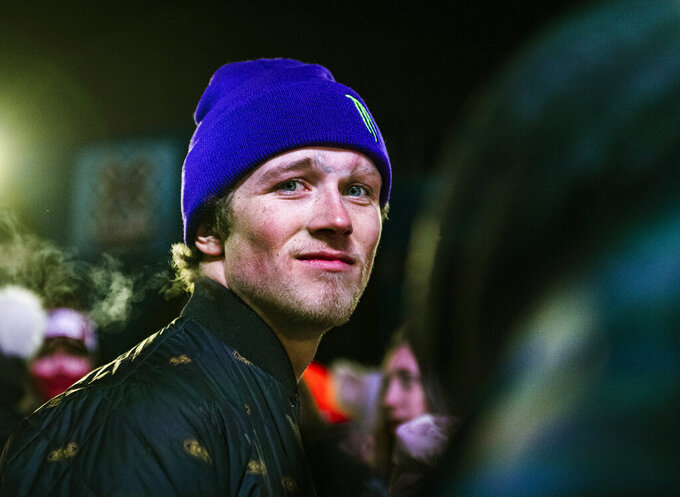 FILE - In this Jan. 26, 2020 file photo, X Games rookie Colby Stevenson pauses before getting the Best in Snow award in Aspen, Colo. Nearly four years after Stevenson suffered a fractured skull he was on top of the freestyle world at the Winter X Games, winning slopestyle and the Knuckle Huck event last winter. (Kelsey Brunner/The Aspen Times via AP, File)

ASPEN, Colo. (AP) — Every May 8 for the last four years — and, he vows, every one going forward — freestyle skier Colby Stevenson could be found in a similar setting: hanging out with friends, usually on top of a mountain somewhere.

It’s his “celebrate life” day, a reminder of how everything can change in the blink of an eye.

On a late-night drive back to Utah from Mount Hood on May 8, 2016, Stevenson fell asleep for a split second. He overcorrected and his truck rolled again and again.

From the moment he woke up in the hospital — with what was classified as a traumatic brain injury because of a fractured skull — he pondered the same question: When can I ski again?

Last winter, he was on top of the freestyle skiing world at the Winter X Games, winning slopestyle and the inaugural ski Knuckle Huck event.

“It’s a miracle that I’m well enough to be able to ski at my highest level,” said the 23-year-old Stevenson, who finished seventh in the slopestyle event Sunday at Winter X. “It’s just been gratitude ever since — the realization that I’m just lucky to be able to shred and send it.”

From an early age, he proved to be a natural on skis — zipping his way down the snowy driveway at 14 months. When his family later moved to Park City, Utah, he constantly watched elite freestyle skiers perform high-flying tricks on the slopes — and then put his own spin on it.

“One of the most crazy talented kids I’ve ever met,” said 2012 Winter X ski slopestyle champion Tom Wallisch, who's now an X Games commentator. “Just one of the kids that works the hardest.”

Fast-forward to 2016: An 18-year-old Stevenson was invited to a West Coast Session camp at Mount Hood in Oregon, where he was so dynamic he earned the MVP award and won best trick. One of his friends, John Michael Fabrizi, suffered a broken leg and needed help getting his truck to Utah.

His last recollection before the crash along an Idaho highway was stopping to buy a can of Starbucks Doubleshot Espresso.

“The next memory I have was waking up in the hospital a few days later surrounded by my loved ones,” Stevenson said.

He'd fallen asleep for just an instant and when he awoke tried to steer the Ford truck back onto the road. It flipped several times, with the roof caving in.

Fabrizi was able to hobble to the road on his broken leg and flag down a car to call for help.

“Saved my life,” Stevenson said of his friend, who escaped serious injuries.

Stevenson's broken bones included ribs, an eye socket, his jaw and his neck. He also fractured his skull, which required two major surgeries, including one to put in a titanium plate.

His mom and stepdad were in Hawaii at the time, but quickly made their way to the hospital. They were there when he woke up a few days later.

“I’m in the one percent of people with that skull fracture and there’s no brain damage. That never happens.”

After a few weeks in the hospital, he went home to recuperate.

Five months later, he was taking his first ski runs in New Zealand. Although told to take it easy, he had to try his favorite trick — a Double-10 blunt — just to see if he could.

The execution was perfect.

Three months after that, he captured a World Cup slopestyle competition in Italy.

“The biggest fear for me after the accident was when I thought I was done skiing ... and having those months of just uncertainty,” explained Stevenson, who was knocked out of qualifying for the 2018 Pyeongchang Games by a torn rotator cuff, and is setting his sights on the Beijing Olympics next winter. “Full of gratitude more than anything — to not only be living but still having the physical ability to do what I love.”

Fast-forward to last winter: At his first Winter X Games competition, Stevenson won the slopestyle and Knuckle Huck competitions, which he described as a "dream.”

“I just skied the best I ever have that day — with my family and my friends there,” said Stevenson, who still experiences neck issues from an accident that caused him to lose an inch of height (from 6-foot-2 to 6-1). “It was perfect.”

So is this: Celebrating with friends every May 8.

“It’s a special day for me to just reflect on the year and keep my sights set on what’s next,” Stevenson said. “I celebrate life. Just live it up. ... Go to the top of the mountain, with my friends and say, ‘Let’s do this boys. We’re living.’”