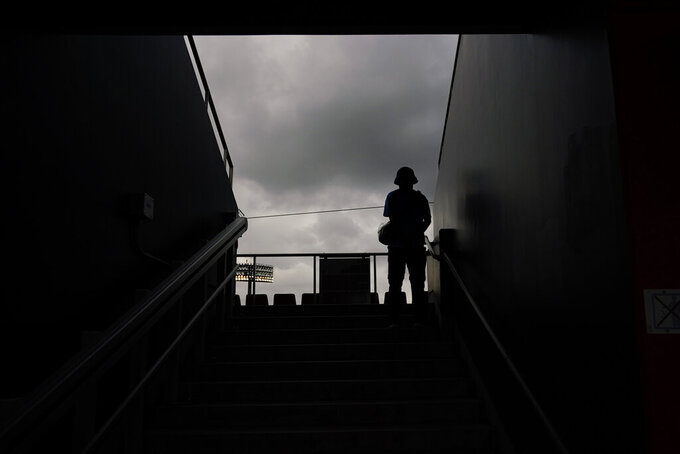 An Olympic worker is silhouetted against clouds at the Fukushima Azuma Baseball Stadium ahead of a baseball game between Japan and the Dominican Republic at the 2020 Summer Olympics, Tuesday, July 27, 2021, in Fukushima, Japan. (AP Photo/Jae C. Hong)

It includes images of ruin and reconstruction, recognition of the more than 30,000 people still evacuated from their homes, an elaborate dance number and an anime segment where a scientist helps a cartoon garlic bulb convince an ill-tempered alien that the region’s food is delicious — and free of nuclear contaminants.

The video is entirely in English. The riders are almost entirely Japanese.

Such is the difficulty for Japan in telling a story to an audience barred from entering its borders.

The coronavirus has left venues eerily empty of spectators and prompted concern over an Olympic-driven COVID-19 surge. But in the northern prefectures of Japan's biggest island, Honshu, these Pandemic Games represent a missed chance to tout restoration following the earthquake of 2011 and the ensuing tsunami and nuclear disaster that ravaged the area.

“I thought the Olympic Games would be a great opportunity to convey these lessons to the world,” said Yoshinobu Harada, executive director for the 3.11 Densho Road memorial program. He spoke to The Associated Press via translator.

“After the disaster, we received generous donations from all over the world, which was a great encouragement to our recovery efforts," he said. "I am very disappointed because I thought that during the Olympics, we would be able to return the favor by showing the restored and reconstructed disaster areas.”

Nearly 20,000 people died and roughly 470,000 were forced into evacuation by the earthquake, a magnitude 9.0 that was the largest ever recorded in Japan. Three reactors at the Fukushima Daiichi nuclear facility about 60 kilometers (36 miles) from the city melted down, contaminating water and soil in a region that specializes in fishing and agriculture. Areas closest to the nuclear plant remain no-go zones.

Japan’s Reconstruction Agency has estimated the cost of rebuilding the region will approach 32 trillion yen ($290 billion), and Olympic organizers scheduled some events in the Fukushima and Miyagi prefectures hoping to lure tourists there to observe the rebirth.

“Surely it would have been a great healing experience for the residents of the affected areas,” Harada said.

Harada's 3.11 Densho Road is a network of museums, parks and preserved disaster sites across the Aomori, Iwate, Miyagi, Fukushima and Sendai prefectures.

Among them is Sendai Arahama Elementary School, where 320 children, teachers and locals were trapped as flooding reached the second floor of the four-story building. All 320 people were evacuated from the roof.

The building was preserved and turned into a harrowing memorial that opened to visitors in 2017. Guests can tour classrooms where blackboards, walls and ceilings were warped by the water. Wall-sized photos depict wreckage from the disaster, like a teacher's car that was swept from the parking lot into a classroom. A clock from the gymnasium, stuck at 3:55 p.m., is on display in an exhibition room that also has photos and models showing damage throughout the Arahama region.

It's one of 46 official sites in the 3.11 Densho Road network that organizers hoped foreigners would get to see during the Games.

The Olympic events themselves were hoped to be a celebration for those who survived the catastrophe, too. Without access to the venues, there hasn't been much rejoicing.

Efforts were made to tie in the local population. At Fukushima Azuma Baseball Stadium prior to Wednesday's baseball tournament opener, dozens of potted flowers and peach trees — the latter a regional specialty — were placed along the concourse, each with a hand-drawn note of encouragement from a local child.

The Japanese baseball team enjoyed some of those peaches prior to the game, a thrilling walk-off victory over the Dominican Republic that would have produced raucous cheers from fans — if any were allowed in the stadium. Japan manager Atsunori Inaba brought up the people of Fukushima unprompted in his postgame press conference.

“In playing our match today in Fukushima, I am really hoping our victory will give motivational methods to the people here," he said.

Among the handful of locals lucky enough to attend was 14-year-old Yuma Takara, who threw out the ceremonial first pitch standing feet from Japanese baseball great Sadaharu Oh.

Takara was 4 when he and his mother fled their home in Haramachi and ended up in Yamagata. His father, a student counselor named Shinichi Takara, stayed behind to ensure the safety of those at nearby schools.

Shinichi Takara said sports have been crucial for healing and normalcy in Yuma's life.

“I feel like through baseball, he has had various experiences and connected with many people,” Shinichi Takara said.

The hope was that the Olympics could do the same for many more in the region. Instead there are disappointments, tempered by the hope that Fukushima — and all it has been through — will still be remembered long after the Recovery Games have ended.

“I would like to think," Harada said, “that the time for people to see the recovery and reconstruction has just been delayed a little.”