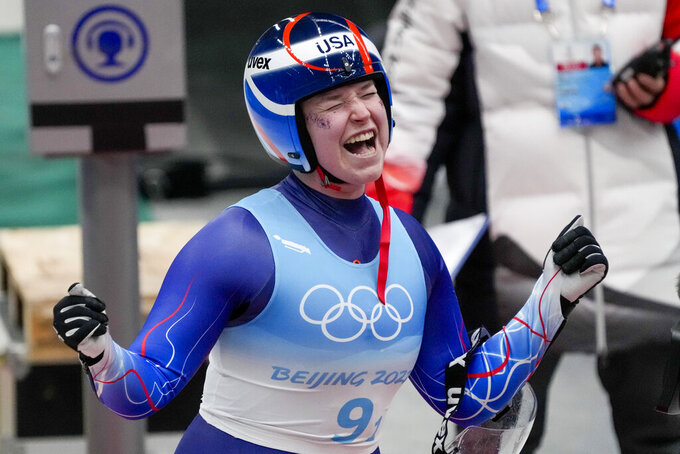 Ashley Farquharson, of the United States, celebrates after finishing her rung in the luge team relay at the 2022 Winter Olympics, Thursday, Feb. 10, 2022, in the Yanqing district of Beijing. (AP Photo/Mark Schiefelbein)

The Beijing Olympics were a luge runaway for the world’s sliding superpower, which won gold in men’s, women’s and doubles events — then put those champions in Thursday’s team relay and watched them end the season with one more victory.

Natalie Geisenberger, Johannes Ludwig and the doubles team of Tobias Wendl and Tobias Arlt finished in 3 minutes, 3.406 seconds at the Yanqing Sliding Center, 0.080 seconds ahead of silver-medalist Austria and 0.948 seconds ahead of bronze-medalist Latvia.

The medal standings were a runaway. The relay was not. Wendl and Arlt had to make up a one-tenth of a second deficit in the final heat of the competition, then skidded a bit just before the finish line — but had just enough speed to prevail.

The United States was seventh, with one Olympic career ending and three others just starting. Chris Mazdzer — the four-time Olympian and 2018 men’s silver medalist — is done on this stage, confirming that he's going to retire after one final farewell World Cup race.

Mazdzer teamed up with Ashley Farquharson and the doubles team of Zack DiGregorio and Sean Hollander for the relay, with a finishing time of 3:05.741.

And afterward, Mazdzer said the future of the team is bright.

“I think we have absolutely amazing athletes," Mazdzer said. “I know every athlete at USA Luge pushes so hard to become the best."

For Farquharson, DiGregorio and Hollander, Beijing represented an Olympic debut. Mazdzer brought the team in for a group hug when the run was over, and they were all smiles afterward.

“I think this being our first Olympics and how we performed this last week is amazing," Farquharson said. “We can only go up from here."