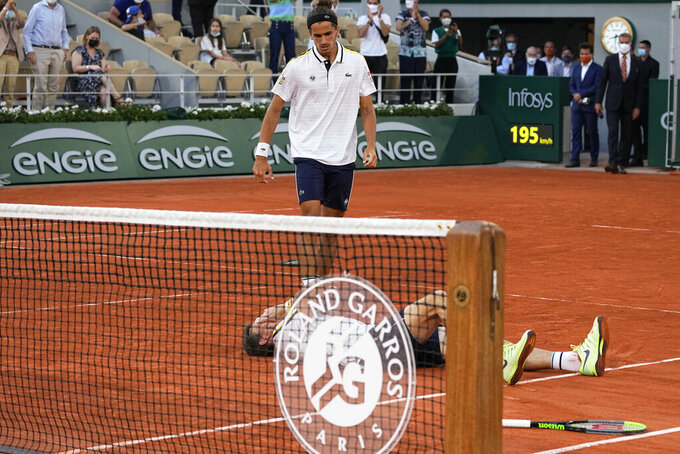 France's Nicolas Mahut lays on the clay as teammate Pierre-Hugues Herbert join him as they defeat Kazakstan's Alexander Bublik and Andrey Golubev in their men's doubles final match of the French Open tennis tournament at the Roland Garros stadium Saturday, June 12, 2021 in Paris. (AP Photo/Michel Euler) 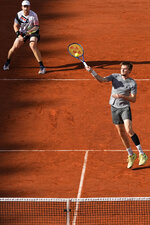 PARIS (AP) — French pair Nicolas Mahut and Pierre-Hugues Herbert will turn their focus to winning an Olympic gold medal in Tokyo after claiming the French Open doubles titles for the second time.

Mahut and Herbert — who have won all four Grand Slam tournaments together — defeated Alexander Bublik and Andrey Golubev of Kazakhstan 4-6, 7-6 (1), 6-4 in Saturday's final at Roland Garros.

It was their fifth Grand Slam title together.

Mahut fell on his back and put his head in his hands after they became the first all-French team to win twice at the clay-court major since World War II.

Mahut and Herbert won their first title in Paris in 2018.

“It’s my dream as a kid to win Roland Garros. To be able to do it a second time in front of this crowd, I think it’s really, maybe the best emotions that I’ve had," Herbert said.

A very emotional Mahut held back tears and said winning the gold medal in doubles at the Olympics could well be the final big goal of their career.

“We are working very hard to achieve this," he said. “This is what motivates us. I'm thinking about it when I find it difficult to go out training."

Bublik and Golubev were bidding to win their first tour-level title and to become the first Kazakh men to win a Grand Slam title in any discipline. The only Kazakh player with a major title is Yaroslava Shvedova, who won the women’s doubles titles at Wimbledon and the U.S. Open in 2010.

The Kazakh pair served for the match at 5-4 in the second set but Bublik was broken after hitting a double fault. Mahut and Herbert then dictated play in the tiebreaker. They saved two break points in the fourth game of the decider and broke for a 4-3 lead.

The French fans rendered an a cappella version of France’s national anthem to celebrate their win.