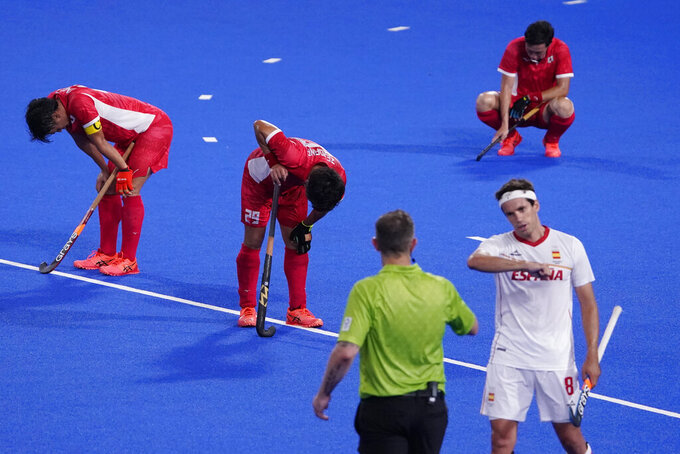 TOKYO (AP) — It was another rough day for Japan's field hockey teams.

The Olympic hosts have had good moments on both the men's and women's sides, but neither has won a match at the Games, and time is running out.

Japan's men lost 4-1 to Spain on Wednesday to likely fall out of contention for a quarterfinal spot. Japan's women dropped a 1-0 decision to No. 4-ranked Australia for their third consecutive one-goal loss.

Japan women's coach Xavier Arnau Creus considered how well Australia had been playing when he assessed his team's result. The Hockeyroos opened the Olympics with two wins and outscored their opponents 9-1.

Arnau Creus also considered the growth on his team.

“Of course the feeling when you lose — not too good, not so nice,” he said. “A long time ago, we started to change a lot of things in this team. In this moment, the team is starting to analyze things well each game, trying to do the system. It’s good for us.”

The Japan women played dominant defense — Australia didn’t even get a shot off in the first quarter, which ended in a scoreless tie.

Australia finally broke through with 12 minutes remaining in the third quarter when Madison Fitzpatrick scored on a penalty corner.

Australia’s Renee Taylor got a yellow card in the fourth quarter and had to sit for five minutes, but Japan could not take advantage.

“I think the match was very tense from the beginning," Japan midfielder Yukari Mano said. “It’s very disappointing that even though we had strong opportunities, we couldn’t score. But I’m glad we are able to compete until the end without giving up.”

Australia expected a tough match given the circumstances.

“Our focus was that the Japanese were going to come out, without a win yet, and they were just going to come out and throw everything at us," Australia midfielder Edwina Bone said. "We were going to be in for a bit of a scrappy fight of a game, which I think it turned out to be. But at the end of the day we still got the result, so I’m pretty proud of how the girls kind of ground it out.”

Japan's women have matches remaining against Argentina and Spain. They need to finish in the top four out of six teams in their pool to reach the quarterfinals.

Japan’s men took a 3-1 lead on No. 1 Australia in their Olympic opener before losing 5-3. They followed that with a 2-1 loss to Argentina before scoring their only point in the standings with a 2-all draw with New Zealand on Tuesday.

The team regressed on Wednesday. Xavier Lleonart scored two goals as Spain unleashed 20 shots. Japan only attempted five shots and one field goal, leaving the team with just a remote chance of reaching the quarterfinals.