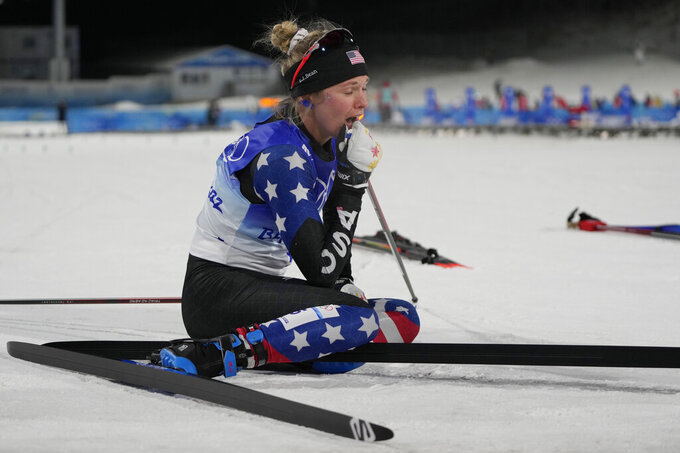 “There has been a lot of talking about (it)," the Norwegian said, "almost (everyone saying) I shall win this race.”

Klaebo defended his Olympic sprint title at the Beijing Games on Tuesday, leading the final for the entire race and punching the air when he crossed the finish line in in 2 minutes, 58.06 seconds.

“Last couple of weeks has been quite stressful,” Klaebo said. "We had some COVID in the team and my coaches are staying at home. But being able to defend the Olympic gold from last time and having this amazing fight with Federico today was special. It was a lot of fun out there.”

“Today it seems he’s not the best Klaebo, but he’s always the best,” Pellegrino said. “I have to thank him to help me to always try to do my best.”

In the women's sprint, Jonna Sundling of Sweden went into the final wearing bib No. 1 after qualifying with the fastest time and carried that momentum to the finish line.

She won the race in 3:09.68, finishing 2.88 seconds ahead of teammate Maja Dahlqvist. Jessie Diggins of the United States took bronze, 3.16 seconds behind.

“It’s amazing. I don’t think I understand it yet," Sundling said. "My body was really good and skis were also really good. Everything just went good today, except one thing in the quarterfinal. I’m so happy with the gold today and my performance.”

For Diggins, it was her second Olympic medal. She won gold in the team sprint at the 2018 Pyeongchang Games — a first for the United States. She is the first American woman to win an individual Olympic medal.

“This is absolutely wild,” Diggins said. “And I'm just so grateful. That's the overwhelming emotion because it's taken so much from so many people. We had amazing skis. We have amazing teammates who have helped me. We have an amazing support staff. This really belongs to everyone.”

Diggins' teammate, Rosie Brennan, was just behind in fourth on Tuesday. It's the first time more than one American has been in a sprint final together.

“That was amazing,” Diggins said of racing with her teammate. “She's skiing so well.”

Sundling is a first-time Olympian but has a world championship sprint title and a team sprint title with Dahlqvist.

The defending Olympic sprint champion, Stina Nilsson, decided to leave cross-country skiing in 2020 and switch to biathlon. She succeeded in making the Swedish Olympic team for the Beijing Games and will be competing in her first race this week.