The Latest: Australian Olympians advised to prepare for 2021 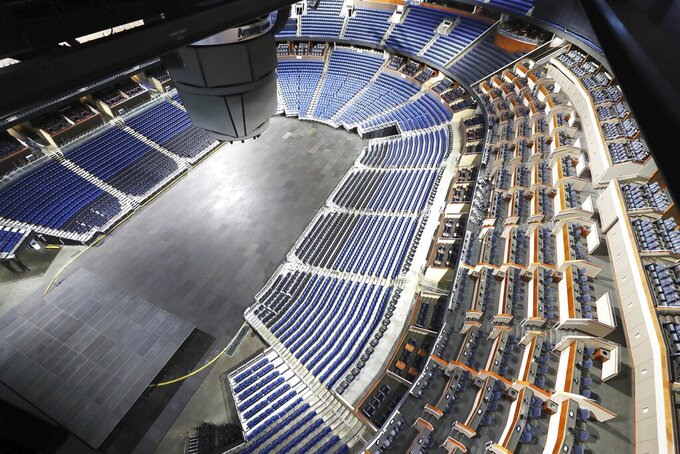 The seats are empty at the Amway Center in Orlando, home of the NBA's Orlando Magic, on Thursday, March 12, 2020. The NBA has suspended the season due to the coronavirus. (Stephen M. Dowell/Orlando Sentinel via AP)

The Australian Olympic Committee is advising its athletes to prepare for an Olympics in 2021.

“Our athletes have been magnificent in their positive attitude to training and preparing, but the stress and uncertainty has been extremely challenging for them," Chesterman said in a statement released Monday by the Australian Olympic Committee.

“They have also shouldered the burden of concern for their peers around the world. That has been a consistent message to me.”

AOC chief executive Matt Carroll said Australia had athletes based overseas and training in central locations around the country.

"With travel and other restrictions this becomes an untenable situation," Carroll said.

The Canadian Olympic Committee earlier said it won't send athletes to the Tokyo Games unless they're postponed for a year, becoming the first country to threaten such a move in the face of the coronavirus pandemic.

The committee sent out a statement Sunday evening saying it was willing to help the IOC search for alternatives, but that it was not safe for athletes, “their families and the broader Canadian community for athletes to continue training for these Games.”

The IOC says it is considering all options. The Tokyo Games are scheduled to start July 24.

Japan’s Prime Minister Shinzo Abe say a postponement of the Tokyo Olympics would be unavoidable if the games cannot be held in a complete way because of the coronavirus impact.

He was commenting on the International Olympic Committee plan to examine the situation over the next few weeks and make a decision, which could include a postponement.

Abe, speaking at a parliamentary session, ruled out the possibility of a cancellation.

Whether Tokyo can hold the Olympics as planned from July 24 has been a major international concern as the COVID-19 pandemic has spread globally.

Leaders at the U.S. Olympic and Paralympic Committee said the update provided by the IOC about the Tokyo Olympics signaled an important step but athletes are still beset with questions about whether the games will go ahead as scheduled in July.

They said they’re sticking with the advice Hirshland offered Friday — that athletes continue to prioritize their health and wellness over everything else. But they said they’re eager to explore alternatives “to ensure all athletes have a robust and fulfilling Olympic and Paralympic experience, regardless of when that can safely occur.”

The leader of the international track federation, Seb Coe, sent a letter to IOC president Thomas Bach saying holding the Olympics in July “is neither feasible nor desirable” with the coronavirus impacting huge swaths of the globe.

Coe sent the letter Sunday after meeting with leaders from around the world in track, which is the biggest sport at the Olympics. It came hours after the IOC announced it could take up to four weeks to make a decision on whether to postpone the games, which are scheduled to start July 24.

Coe cited issues of fairness, the increased likelihood of injuries if athletes have to rush through training and the uncertainty caused by public health issues that are forcing many countries to order all people to stay indoors.

Coe reiterated what he's said before — that nobody wants to see the Olympics postponed, but it can't be held at all costs, specifically the cost of athlete safety.

The IOC will take four weeks to weigh options for the Tokyo Games amid mounting calls from athletes and Olympic officials for a postponement due to the coronavirus pandemic.

The time will be used to plan different scenarios for the July 24-Aug. 9 games, the International Olympic Committee said Sunday.

“These scenarios relate to modifying existing operational plans for the Games to go ahead on 24 July 2020, and also for changes to the start date of the Games,” the IOC said.

Though canceling the Tokyo Olympics is not an option, a delay until later this year or in 2021 is possible.

Bach has consistently said organizers are fully committed to holding the games from July 24-Aug. 9 — despite athlete training, qualifying events and games preparations being disrupted more and more by the virus outbreak spreading globally.

Criticism of the stance grew in recent days — from athletes and by a first IOC member last Tuesday — and Bach finally acknowledged an alternative plan was possible.

“Of course we are considering different scenarios,” Bach told the New York Times in an interview late Thursday.

The St. Louis Blues say a relative of a team employee has tested positive for COVID-19.

The person is in self-isolation along with members of the person's family, according to the team.

All Blues staff who may have come into close contact with the employee have been notified. The team says it is asking for all members of the Blues to remain isolated, monitor their health and seek advice from team medical staff.

Orlando Magic forward Jonathan Isaac announced he is teaming up with a church to provide hot breakfasts and lunches to school kids age 18 and under on weekdays for the duration of the coronavirus pandemic.

“There’s a great concern to those kids going hungry at this time. We don’t want that to happen,” Isaac said.

The breakfasts and lunches will be grab-and-go style, in line with social distancing mandates. Isaac says a nurse will be on-site for the pickups as well. Isaac also says there’s a similar plan in place to assist those who are living in extended-stay hotels.

“We cannot just sit on our hands while this is going on,” Isaac said.

Isaac was honored by the Magic last year for his commitment to community involvement. The Magic have pledged $2 million to help arena workers displaced by the sports and entertainment shutdown, and Magic players Mo Bamba and Nikola Vucevic are among those who have offered financial help to that cause as well.

The $12 million Dubai World Cup, the world’s richest purse in horse racing, will be postponed until next year. That’s according to an announcement from the Dubai Media Office, a governmental agency. Officials had planned to run the race March 28 without spectators over concerns about the new coronavirus and the COVID-19 illness it causes.