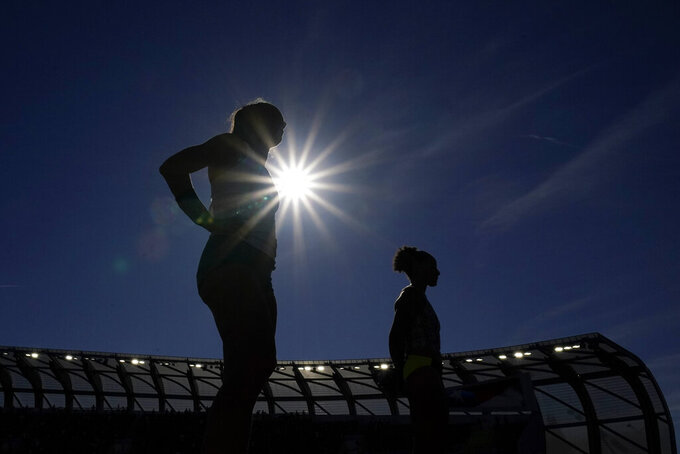 Competitors stand for the national anthem before the prelims of the women's pole vault the U.S. Olympic Track and Field Trials Thursday, June 24, 2021, in Eugene, Ore. (AP Photo/Charlie Riedel)tonal at the

Emma Coburn is headed to her third Olympics after winning the 3,000-meter steeplechase at the U.S. track trials.

The American recordholder in the event, Coburn finished in a meetrecord 9 minutes, 9.41 seconds.

Joining her on the Olympic team will be Courtney Frerichs, who finished second in 9:11.79 and Val Constien, who finished in 9:18.34.

Following her victory, Coburn was rushed by members of her family, all wearing “Go Emma” T-shirts. Among them was her mom Annie, who was diagnosed in late 2019 with Stage 4 cancer.

“Sharing this with my mom is everything,” she said.

The event was heartbreaking for Leah Falland, who was among the favorites and was running for a top-three finish when she fell coming off a hurdle with two laps to go and couldn't make up ground.

“I knew I could do it,” Falland said through tears about her chances of finishing in the top three and making the Olympics. “I knew it was in there. It was kind of shocking, to be honest. I’m sorry, just really, really sad.”

Jessica Ramsey won the shot put for a spot on the U.S. Olympic team, breaking the meet and her personal best at 66 feet, 1/4 inch.

Saunders, who competed in an Incredible Hulk mask, danced on the field upon making her second Olympic team. She also hugged Michelle Carter, the defending Olympic champion in the event. Carter could not compete after having surgery to remove a benign tumor from her ankle earlier this month.

Aquilla won the NCAA title in the shot put at Hayward just two weeks ago.

Former Oregon runner Raevyn Rogers qualified for the semifinals in the women’s 800 meters Thursday below the tower at Hayward Field that bears her image.

Rogers is in elite company: Images of Bill Bowerman, Steve Prefontaine, Ashton Eaton and Otis Davis also grace the tower that was erected as part of the renovation of the storied track stadium.

During her career at Oregon, Rogers won six NCAA and three Pac-12 titles and won the Bowerman award for the best collegiate track and field athlete in the nation. During her run the Ducks won four NCAA team titles.

On Thursday, her grandmother and her aunt got to see her larger-than-life likeness on the tower for the first time. And they also got to see Rogers run.

“What made me the most touched and so happy about it was how it affected my grandmother. My grandmother is the closest person I have to my grandpa, and my grandpa passed. So she’s a very strong figure in our family and to see her so excited, and to know that it was worth it for me coming all the way out here and only coming home twice during college. They came in and saw it today – it was the first time seeing it in person. It’s just really a heartwarming feeling.”

Kessler ran his first race in his new shoes during the first round of the 1,500 meters at Hayward Field. He finished in 3 minutes, 45.63 seconds to win his heat.

“It hasn’t sunk in, and I don’t know how long it will take,” Kessler said of being a professional. “It’s pretty amazing, and I’m very grateful.”

The 18-year-old Kessler from Michigan recently broke Jim Ryun’s American under-20 record with a time of 3:34.36 at the Portland Track Festival. Ryun’s mark had been on the books since 1966.

Kessler said the decision to turn pro was stressful.

“Weighed on me for a long time,” Kessler said.

In other races, sprinter Allyson Felix finished in the top three of her heat of the 200 meters to advance to the semifinals.

Sha'Carri Richardson is out. Allyson Felix is in.

Start lists for Thursday's 200-meter preliminaries at U.S. track trials include Felix, who has qualified for the Tokyo Games in the 400, but not Richardson, the 100-meter champion who had been qualified for the longer distance but decided not to race.

If Felix were to finish in the top three at 200 meters, she'd have to choose a distance, because the 200 and 400 will overlap on the Olympic schedule.

When asked last week about her prospects for the 200, Felix said “I think I want to have fun with it.”

With potentially record temperatures about to reach the Pacific Northwest, parts of the U.S. track and field trials are being rescheduled to try to beat the heat.

This weekend's 20-kilometer race walks and the women's 10,000 and men's 5,000-meter finals have all been moved to earlier time slots. The walks will start at 7 a.m. Saturday, two hours before originally scheduled.

After a two-day break, action at Hayward Field resumes Thursday with finals in the women's shot put and women's steeplechase. In that race, Emma Coburn is seeking her ninth national title and third trip to the Olympics.

Also competing in preliminaries Thursday are hammer thrower Gwen Berry and sprinter Sha'Carri Richardson, who will try to qualify in the 200 after winning the 100-meter title last week.