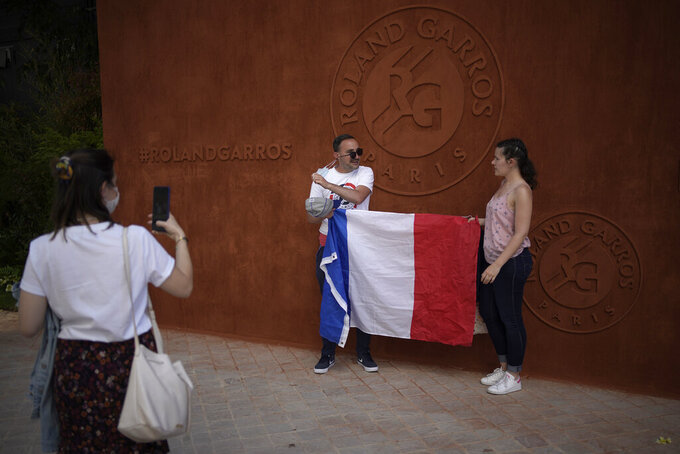 Tennis lovers pose with a French flag at the Roland Garros stadium during their first round of the French Open tennis tournament Sunday, May 30, 2021 in Paris. (AP Photo/Christophe Ena)

Serena Williams is a winner in the first scheduled night session in French Open history. She overcome two set points to beat Irina-Camelia Begu 7-6 (6), 6-2 under the lights in the first round.

Matches at last year’s tournament in September stretched into the night on courts with new lights. But scheduled night play is new this year at Roland Garros.

Williams and Begu took the court in the twilight at 9 p.m. with the stadium stands empty. Fans are being admitted for day matches this year, but not for night sessions.

Williams struggled with her first serve but moved well and played aggressively, charging forward when she had the chance. Facing a set point in the tiebreaker, she sprinted in and from the service line whacked a nervy swinging volley for a winner.

She has won the French Open three times, most recently in 2015, and at age 39 is chasing a record-tying 24th Grand Slam singles title.

Williams improved to 77-1 in first-round Slam matches. The loss came in Paris in 2012.

The president of the French tennis federation said Naomi Osaka’s withdrawal from the French Open is “unfortunate” and wished her the “quickest possible recovery.”

The four-time Slam champion pulled out of French Open on Monday, saying that she would be taking a break from competition. She said she has “suffered long bouts of depression.” She had previously declared she would not speak to the media during Roland Garros and was fined $15,000 after she skipped the post-match news conference following her first-round victory Sunday.

In a statement to journalists at Roland Garros, Gilles Moretton said “first and foremost we are sorry and sad for Naomi Osaka."

Moretton said he is looking forward “to having Naomi in our tournament next year,” and insisted that the event organizers were committed to “all athletes’ well-being.”

Muguruza received treatment for a back issue between sets and made a slew of aggressive errors, as though eager to end rallies quickly. She won the tournament in 2016, won Wimbledon in 2017 and was seeded 12th. It was her first opening-round exit at the French Open.

Naomi Osaka says on Twitter that “the best thing for the tournament” is if she withdraws from the French Open.

Osaka is a four-time Grand Slam champion and former No. 1-ranked player.

She had declared she would not speak to the media during Roland Garros and was fined $15,000 after she skipped the post-match news conference following her first-round victory Sunday.

On Monday she tweeted: “I think now the best thing for the tournament, the other players and my well-being is that I withdraw so that everyone can get back to focusing on the tennis going on in Paris.”

She also wrote that she has “suffered long bouts of depression” since the 2018 U.S. Open, which she won by beating Serena Williams in a final filled with controversy.

American Sofia Kenin has broken a four-match losing streak on clay and won her opening match at the French Open by beating 2017 champion Jelena Ostapenko in three sets.

Kenin is seeded fourth and was the runner-up last year to Iga Swiatek. The victory was Kenin’s first since announcing she’s no longer coached by her father, Alex.

Novak Djokovic says he is planning to play at the Tokyo Olympics as long as local fans are allowed in stands.

“As I heard, there’s going to be some crowd, local crowd from Japan only,” Djokovic told a news conference at Roland Garros. “As I understand, 20%, 30% of the capacity. If they change something, if there’s not going to be any crowd, then I’ll consider if I want to go or not. Right now I am planning to go, and I’m very excited about that."

Djokovic competed at three Olympic Games and won a bronze medal in singles back in 2008 in Beijing.

Roger Federer has made a winning return to Grand Slam tennis after 16 months away.

Federer's first match at a major tournament since the 2020 Australian Open ended with a 6-2, 6-4, 6-3 victory over qualifier Denis Istomin at the French Open.

Federer produced more than twice as many winners as unforced errors — 48 to 20 — and never faced a break point while improving to 8-0 against Istomin over their careers.

Federer had two operations on his right knee last year.

Federer won the 2009 French Open for one of his 20 Grand Slam titles. He shares that men's record with rival Rafael Nadal.

Bianca Andreescu, the 2019 U.S. Open champion, is out of the French Open in the first round after losing a 9-7 third set.

The sixth-seeded Andreescu's second appearance in the main draw at Roland Garros ended with a 6-7 (1), 7-6 (2), 9-7 defeat against 85th-ranked Tamara Zidansek of Slovenia.

Andreescu withdrew before her quarterfinal last week in Strasbourg with an abdominal injury.

Zidansek had been 0-2 at the French Open.

At his fifth attempt, Daniil Medvedev has finally won a match at Roland Garros.

The second-seeded Russian, who lost in the first round on each of his four previous appearances on the Parisian red clay, claimed a maiden win at the Grand Slam event by defeating Alexander Bublik 6-3, 6-3, 7-5.

Medvedev has often struggled on the slow surface — he has a 12-20 record on clay — and much prefers hard courts. He holds a 148-59 record on hard and has won all his 10 titles on the fast surface.

During his on-court interview, Medvedev told the crowd he feels the balls used in Paris suit his game really well.

“Since I arrived here I’m feeling really well, I can almost play as if on hard courts,” he said. “Hopefully I can achieve something big.”

A two-time Grand slam runner-up, Medvedev is bidding to become the third Russian man to win a major after Yevgeny Kafelnikov and Marat Safin.

Italian rising star Jannik Sinner saved a match point in his opening match at the French Open before rallying past Frenchman Pierre-Hugues Herbert 6-1, 4-6, 6-7 (4), 7-5, 6-4.

The 18th-seeded teenager was on the verge of a shock exit at Roland Garros, a year after making it to the quarterfinals on his debut on the Parisian clay. But Herbert could not seize his chance, shanking a shot wide at 4-5, 30-40 in the fourth set.

That proved to be a turning point as Sinner finally held, broke, and sealed the set. Herbert’s missed backhand volley then gave Sinner an early break in the decider and the Italian prevailed with his deep groundstrokes.

It was the second meeting between the pair. Sinner had dropped only four games the last time they met, in a best-of-three-set match. This contest was more closely contested as Herbert, who is also an accomplished doubles player, often tried his luck at the net and managed to put his rival on the backfoot during long spells of playing with his aggressive approach.

A relieved Sinner said: “It’s a crazy sport and I’m happy it went my way.”

Defending French Open champion Iga Swiatek has picked up right where she left off last year in winning the title: running yet another opponent this way and that on the red clay of Roland Garros in a straight-set victory.

Her best friend on the tennis circuit, Kaja Juvan, was the victim on Court Philippe Chatrier on Monday as Swiatek emphatically kicked off her campaign to become the first woman since Justine Henin in 2007 to successfully defend the French Open title.

Playing on her 20th birthday, Swiatek treated herself to a 6-0, 7-5 victory — her eighth straight-set win in a row at Roland Garros, having also not dropped a set in winning last year as an unseeded 19-year-old.

Evergreen 39-year-olds Serena Williams and Roger Federer will be attempting to roll back the years on Day 2 of the French Open, where first-round play is underway on the sun-kissed clay courts and Iga Swiatek will begin the defense of her title.

Federer, the oldest player in men's singles this year, is scheduled for the third match on Court Philippe Chatrier. It will the first Grand Slam match since the 2020 Australian Open for the holder of 20 major titles, making a comeback from double surgery on his right knee.

Federer plays Denis Istomin from Uzbekistan. Istomin reached the main draw via the qualifying competition. He has not advanced beyond the second round in 10 previous Roland Garros appearances. Federer is seeded eighth this year.

Williams plays after Federer vs. Istomin, in the last match on Philippe Chatrier, not scheduled to start before 9 p.m. Matches at last year's tournament — held exceptionally in autumn — also stretched late into the night on newly floodlit courts. But scheduled night sessions are a novelty this year at Roland Garros.

Swiatek opens her title defense against Kaja Juvan of Slovenia, in the first match on Chatrier. Swiatek, who turned 20 on Monday, didn't drop a set on her way to victory last year.