The Latest: Softball World Cup pushed back to 2022 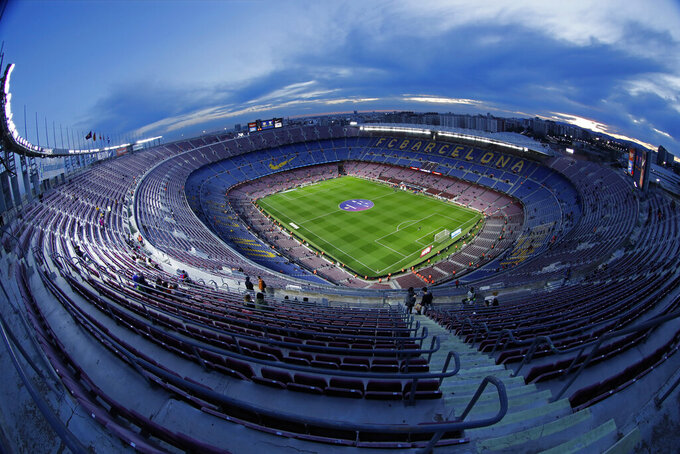 The men’s softball World Cup has been pushed back from 2021 to 2022 because of the impact of the coronavirus pandemic on qualifying tournaments.

The World Baseball Softball Confederation says it decided to delay the tournament, initially scheduled for February next year, after consultation with hosts New Zealand.

The confederation says, ”Important health and safety measures, including travel restrictions applied by governments worldwide to help stop the spread of COVID-19 have caused modifications to the global baseball softball events calendar."

The WBSC and Softball New Zealand are working to confirm new dates.

New Zealand, which has won the men’s world championship seven times, last hosted the tournament in 2013.

___ Louisville has furloughed 45 athletic department staffers for at least 60 days and eliminated 40 other support positions in the latest budget moves resulting from shutdowns caused by the coronavirus pandemic.

Athletic director Vince Tyra also announced 4% pay cuts for staffers earning more than $100,000 in the next year, with those earning below that figure taking 2% salary cuts. The newest salary cuts do not include head coaches, senior staff or the AD, whose salaries were reduced 10% earlier this month.

Wednesday’s moves bring the total of cuts to $5 million including previous moves, but the furloughs, reductions and new pay cuts do not include coaching staffs.

“We have around 325 employees including all the coaching staff, so this is more impactful to the non-coaching staff,” Tyra said in a teleconference. “We had some really long-term employees that were impacted by today’s decision, so it’s a heart-felt process.”

Louisville will honor the contracts of eliminated staffers through June 30, allowing them to file for unemployment. Several vacancies won’t be filled because of a hiring freeze while another staffer is retiring. The furloughs take effect in 30 days, and Tyra said the 60-day window allows the option to bring some staffers back early or extend others.

Tyra warned of the staff moves Monday as the department announced 15% cuts in sports budgets.

That was among the suggestions from the USTA on Wednesday, when it offered return-to-play guidelines to help players and people running tennis facilities know when — and how — the sport should resume at the amateur level as coronavirus lockdown restrictions ease.

The USTA thinks it will be safe to again play tennis “in some cities and states sooner than in others.”

One of the recommendations is to maintain social distancing by staying 6 feet apart from other people — and, therefore, to avoiding playing doubles, because it “could lead to incidental contact and unwanted proximity.”

The group that runs the U.S. Open went on to add: “If you do play doubles, avoid all incidental contact, no Bryan Brothers chest bumps and no whispering to each other from a close distance to strategize.”

All professional tennis has been suspended at least until mid-July. The U.S. Open is still scheduled to begin main-draw play in New York on Aug. 31.

The World Games in Birmingham, Alabama has unveiled an updated logo and title after being delayed a year because of the coronavirus pandemic.

The Olympic-style competition for sports and events that are not on the Summer Games program will now be known as The World Games 2022.

The event was initially scheduled for July 2021, but it will now be held in July 2022 to accommodate the one-year postponement of the 2020 Summer Olympics.

While those games will continue to be known as “Tokyo 2020,” the World Games decided to go with a more accurate moniker.

The head of the NFL Players Association says the new collective bargaining agreement does not have a similar clause to one that allows the NBA to start cutting players’ pay in mid-May.

Executive Director DeMaurice Smith said Wednesday on a call with reporters that the CBA with the NFL does not have a “force majeure” provision, which would prevent someone from fulfilling a contract because of unforeseeable circumstances. The NBA is using that clause to begin taking a 25% chunk out of players’ checks starting May 15 for a league that shut down March 11 because of the coronavirus pandemic.

The NFL began its new business year March 18 and allowed teams to begin virtual offseason programs Monday. The draft begins Thursday night, with the 2020 schedule expected to be released in early May.

Smith says it’s clear under the new CBA what happens if NFL games are canceled, and the union will follow that labor deal depending on developments.

“We’re bound by a contract that we call the collective bargaining agreement,” Smith said. “And certainly it has provisions in it that are different than other sports.”

Charlotte Hornets coach James Borrego says he thinks some players could need “multiple weeks” to get back into true basketball shape if the NBA decides to return to action this season. The league hasn’t played games in nearly six weeks due to the coronavirus pandemic.

Borrego says unlike when there was a lockout — and players gathered routinely for five-on-five pickup games in gyms — he knows some players who don’t have access to a court to work on basketball-specific drills. The Hornets staff is monitoring players and helping them with their conditioning remotely during the lockdown, but Borrego cautions the league needs to be “very careful” not to rush back too soon because “nobody wants to get hurt or injured in this time.”

Borrego says when players return to practice, they’ll be monitored individually by the training staff to determine their physical condition.

The spring prep sports season is officially over in South Carolina.

Gov. Henry McMaster and state education superintendent Molly Spearman announced Wednesday that schools across the state would remain closed through the end of the academic year in early June. That means any chance of high school athletes continuing to play spring sports such as baseball, softball and lacrosse ended with the decision.

Schools have been shut down since March 16 due to the coronavirus pandemic. Prep coaches and athletes held out hope that if schools were opened, they could continue playing. Instead, all competitions, including spring football workouts, were called off.

Canada has rescheduled its Olympic swimming trials for April 7-11, 2021, in Toronto.

It will be shortened to five days instead of seven, which was the original plan for this year. Selection and nomination policies for the team chosen from the trials will be developed with the Canadian Olympic Committee.

The date change is a result of the Tokyo Games being rescheduled for July 23-Aug. 8, 2021, because of the coronavirus.

Swimming Canada will hold its open water trials April 17-18, 2021, in the Cayman Islands.

Swimming Canada high performance director John Atkinson says that while swimmers are unable to train now, he’s hoping they will resume in this fall.

A 99-year-old World War II veteran who has raised more than 28 million pounds ($34.5 million) for Britain’s health service during the coronavirus pandemic has been invited to perform one of British sport’s quaintest traditions once the crisis is over.

Tom Moore will get the chance to ring the famous bell at Lord’s cricket ground, signalling the start of a day’s play, as a reward for his fundraising efforts that have become a national rallying point. The job is typically given to former cricketers or figures in the sport.

The offer was made to Moore, a cricket fan, by England captain Joe Root - a fellow Yorkshireman.

“I’d love you to give us a team talk at some point as well,” Root said in a video conversation with Moore, “and get all the lads in the right frame of mind.”

The Twitter account of Lord’s posted a message to Moore, saying he is “an inspiration to us all.”

With the aid of a walking frame, Moore walked 100 laps of his garden in eastern England to support workers in Britain’s National Health Service. He wanted to complete the mission before his 100th birthday on April 30, and his family initially set a target of raising 1,000 pounds.

The Dutch soccer association has canceled the remainder of the women’s league season and cup tournament following a discussion with the clubs.

The KNVB says the consequences of the cancellation will be clarified on Friday when soccer authorities talk with the clubs.

The cancellation follows Tuesday’s announcement by the government that its ban on all large-scale events was being extended until Sept. 1.

The KNVB says it also plans to cancel the rest of the men’s season but will discuss the issue with UEFA before making the final decision.

The French rugby league has canceled the semifinals of its Top 14 league because of the coronavirus pandemic.

The LNR’s executive committee abandoned hosting the semifinals on June 19 and 20 and the final in mid-July in the southern city of Nice but says they could potentially be played before the end of summer if health conditions allow.

The LNR says it is waiting to see what rules the government sets out following the end of lockdown before definitively deciding if a resumption is possible.

France is under lockdown until May 11.

The Berlin Marathon says the race cannot be held as planned in September because of new restrictions in the city related to the coronavirus pandemic.

City authorities have extended a ban on major events with more than 5,000 people until October 24. More than 62,000 people took part in the marathon last year.

Organizers say they will take time to “engage with the consequences of the authorities blocking our events, agree on further steps and then inform you.”

There was no mention of any plan to restrict the race to elite runners only. That was the solution used by the Tokyo Marathon on March 1.

The Berlin Marathon is typically one of the fastest in the world. The current men’s world record was set in Berlin by Eliud Kipchoge in 2018.