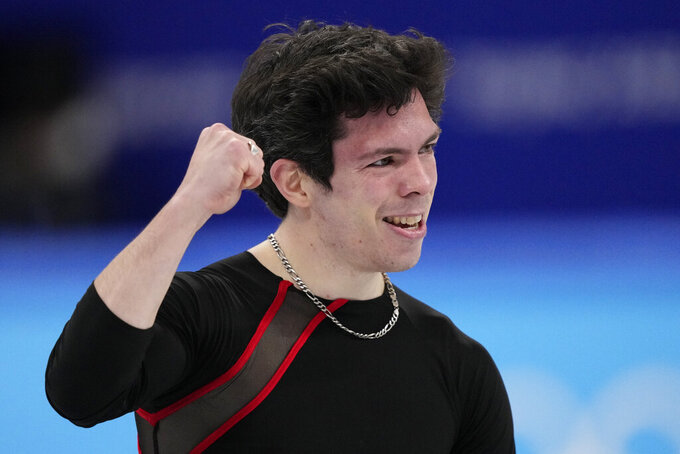 BEIJING (AP) — Keegan Messing went from being stuck in a room with COVID-19 to traveling around the world. One skate at the Olympics made it all worthwhile.

The figure skater's preparations were derailed when a positive test for the virus put him off Team Canada's scheduled flight to the Beijing Olympics, and he spent last week waiting for the series of negative tests he needed to be allowed to fly to China.

He missed the chance to represent Canada in the team event but finally touched down Monday after scrambling for places on the few flights heading to China from Europe. On Tuesday, he finished ninth in the men's short program.

“The journey here was crazy. I'm used to long trips but this takes the cake,” Messing said. “We went Vancouver, Montreal, Frankfurt, Milan to here. To start in Vancouver and go over the Atlantic Ocean instead of the Pacific, it definitely felt like we were going in the wrong direction. Keeping the mental health side of things strong was very, very difficult."

Messing stayed strong with video calls to his wife and baby son, whose picture he showed to the TV camera after his skate. He admits there were low moments when he watched his son “do stuff for the first time, while I'm sitting on a bed not doing anything, while I'm waiting for my quarantine to end and making it feel like I was wasting my time."

Messing was able to train on rented ice while waiting for clearance to leave Canada. After arriving in Beijing, he had to wait for another virus test, then rush to training.

“I was looking at pictures after practice and I was like, ‘Oh hey, I forgot to shave,'" he said. “I just didn't have time.”

Luckily, Messing relies on muscle memory and doesn't need much time to practice.

It wasn't even Messing's first hectic competition of the season. A dual U.S.-Canadian citizen, he barely made it to Canadian nationals after a long journey from Alaska to Ottawa last month. His luggage was delayed, so he rushed to find replacement skates to practice.

The 30-year-old Messing has been skating since he was a toddler but no season will ever match this one. He started his skate Tuesday with a high-scoring quadruple toeloop-triple toeloop combination — proving he still had what it takes after the journey — and followed up with a triple axel and triple lutz. His score of 93.24 keeps him in the fight with the world's best skaters ahead of Thursday's free skate.

“We've just been keeping the happy-go-lucky attitude,” Messing said. “Just to hop on Olympic ice and to put a performance I can leave happy with, it means a lot.”