Now at Olympics, Pedri losing count of games after 11 months 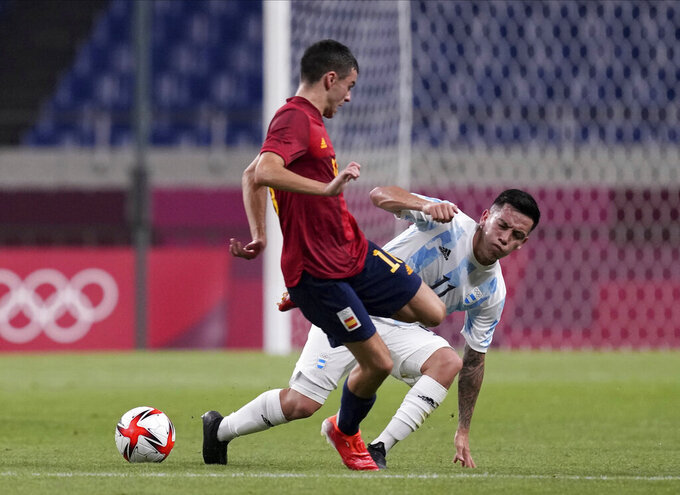 TOKYO (AP) — Even Pedri Gonzalez can’t be sure how many games he has played in this never-ending season.

“I think it’s a very high figure,” said the Barcelona midfielder, who played for Spain at the European Championship and is now playing some more for his country at the Tokyo Olympics. “I don’t really count them.”

It turns out he has played 70 matches in 11 months in a season of rapid progress, and he could get three more games if Spain reaches the Olympic final on Aug. 7.

An exhausting stretch even for an 18-year-old.

In September, Pedri was playing for Spain's under-21 team, showing off his gifted touches and superb ball control to a rather small audience. His Barcelona debut came three weeks later after gaining a season of experience on loan at Las Palmas in Spain's second division.

A Champions League debut followed in October. Add in appearances in the Spanish Super Cup and Copa del Rey, and it was clear how integral he quickly became to the Catalan club.

There was only one league match he didn’t play in, and that was the last game of the season when little was at stake. It gave him a brief rest ahead of Euro 2020 because, in the midst of this impressive season, Pedri was also rapidly promoted to Spain’s national team for the start of World Cup qualifying.

Oh, and it was only during the European tournament that Spain decided they’d like to take Pedri to the Olympics, with almost no time to take a breather before flying to Japan. There were only nine days between Spain losing to Italy in the Euro 2020 semifinals and an Olympic warmup match against Japan.

The only minute of Spain’s Euro 2020 campaign Pedri didn’t play was in the quarterfinals against Switzerland when he was substituted in favor of another penalty taker just before the shootout.

Pedri went on to be named the young player of the tournament with a 91% pass completion rate and covered the most ground of any player up to the semifinals.

“I’ve never seen anything like it,” Spain coach Luis Enrique said after being mesmerized by displays that drew comparisons with World Cup-winning playmakers Xavi Hernandez and Andres Iniesta.

Barcelona, however, would have preferred that Pedri didn’t go the Olympics.

“We have to protect our players,” Barcelona coach Ronald Koeman said. "For me, the Olympics are more about track and field than soccer.”

But Spanish clubs have to release players for the Olympics, even though they are not mandated to by FIFA. International players' union FIFPRO would like defined rest periods for players before and during seasons.

The energy of youth masks any fatigue for Pedri.

“I don’t treat it like a job," he said after Wednesday’s final group game in Saitama. “It’s fun playing football.”

Unlike the women’s tournament, where are restrictions don't apply, men’s Olympic soccer has a cap. All but three players have to be under the age of 24.

Pedri is one of six Spaniards in Japan who also played at the European Championship, while Brazil striker Richarlison came to the Olympics straight from the Copa America.

“The fact they went back-to-back tournaments is remarkable and frankly not healthy,” FIFPRO general secretary Jonas Baer-Hoffmann said. “There is physical burnout and also mental burnout.”

Another is Unai Simón, who was in goal for all six of Spain's Euro 2020 games. In defense is still Pau Torres and Eric García. Up front just is Mikel Oyarzabal and Dani Olmo.

“Maybe sometimes in the game you’re going to feel a little bit of tiredness,” Olmo said. “But at the end, what matters is here in the heart.”

Olmo’s winning goal clinched the under-21 title in 2019 at the European Championship, a tournament that determines Olympic qualification. Wouldn’t the 23-year-old Leipzig forward prefer to be on vacation now?

“Some people ask me why I should come and not rest a little bit,” he said. “But I say, ‘No, this is a big opportunity for us.’ So if the coach gives me an opportunity I will come.”

In sports, it’s often about seizing opportunities. Just ask Pedri, who started the season in September, became the youngest Spaniard to play at a European Championship in June, and still has a chance to win Olympic gold in August.

A week after that gold-medal game, Barcelona's new league season begins. Pedri might just have to sit that one out.

“I feel the love people give me," he said. "I am ready for many more games.”