Olympic athletes have 1 more thing to stress about: Weather 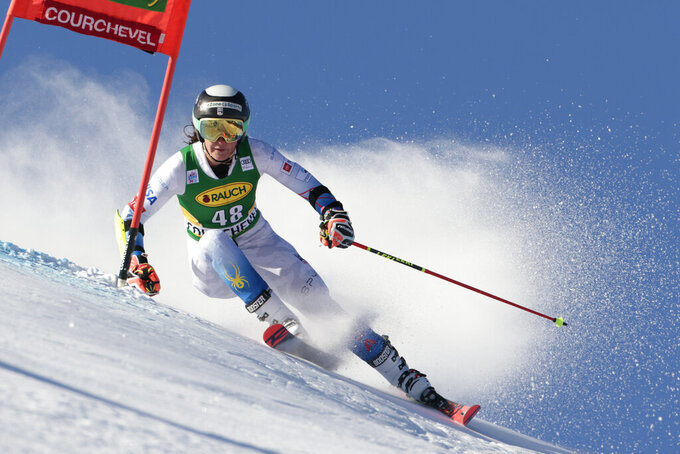 FILE - United States' Keely Cashman speeds down the slope during the first run of an alpine ski, women's World Cup giant slalom, in Courchevel, France, Dec. 21, 2021. Winter Olympians in outdoor sports such as Alpine skiing or snowboarding say the weather can be a key factor in success or failure. (AP Photo/Giovanni Maria Pizzato, File)

Mikaela Shiffrin describes herself as “super controlling over everything that’s happening in my life,” so the two-time Olympic gold medalist is not all that fond of one particular can’t-do-a-thing-about-it aspect of her chosen sport, Alpine skiing.

“The weather,” she said, “can literally change everything.”

The 26-year-old from Colorado is scheduled to open her Beijing Olympics on Feb. 7 as the defending champion in the giant slalom. A key word there is “scheduled,” because, as Shiffrin experienced at the 2018 Pyeongchang Games, nothing is certain when it comes to the vagaries of various elements such as temperature, wind, sunlight or precipitation.

In outdoor events, all of those factors can, and quite often do, alter the competition and the competitors themselves.

“"On a more macro level, it takes a lot of mental effort to be ready to go out and compete in an Olympic event and when ... it doesn’t happen ... it’s, for sure, stressful and takes energy away from that level. It’s unlike any other sport, in that sense, right?

Olympians say the weather might change their preparation and mindset before a contest. Once the contest begins, it might harm — or, it’s also true, help — their result. All of which turns this into just another source of stress at a one-day-every-four-years spectacle already filled with them.

“That’s like, probably, 90% of what we’re thinking about,” said Keely Cashman, a 22-year-old Alpine skier from California heading to her first Olympics.

Snowfall is not in the forecast for the Yanqing mountain area during these Olympics. Strong wind is expected.

Something else to contend with: the way light, and therefore visibility, switches as the sun moves across the sky over the course of a day, creating shadows that appear and recede. In an event like the downhill, where speeds can top 80 mph (130 kph), it’s vital to be able to pick up on nuances along the course.

“You need to see everything on the slope,” said Vincent Kriechmayr, a 30-year-old from Austria who won two golds at the 2021 Alpine world championships. “When we have bad light, you have to react: ‘What’s coming (toward) my skis?’ ... When we see the slope, we can push.”

As it is, the quality of the snow tends to deteriorate as more racers head down a hill.

It generally is considered better to go earlier to avoid ruts and bumps that develop. But if a headwind gives way to a tailwind, say, or if a cloudy day turns clear and the crystals of the snow shift, then advantages can, too.

“It’s rare to have days where it’s consistent. You do have them, but they’re few and far between,” said U.S. ski team member Bryce Bennett, who won a World Cup downhill at Val Gardena, Italy, in December. “The variables make it interesting. When you’re on the good side of variables, you’re psyched. When you’re on the bad side, you’re (angry).”

A slate sky can dull the contrast between the background and the halfpipe for vaulting snowboarders, making it tough for riders to pick out landing spots. Wind can slow down athletes as they try to gain speed to execute tricks with 1440 degrees — or more — of spin. Shifting winds are most dangerous on the slopestyle course, where jumps are as high as 80 feet, because riders can’t properly calibrate the speed needed to execute tricks.

“I feel like you’d be crazy if you weren’t worried about that kind of thing,” said freestyle halfpipe skier Carly Margulies, a 24-year-old from California. “But at the end of the day, you kind of just have to push that out (of mind).”

“I’m not God, so I can’t do anything about it. You have to (accept) the situation and just focus on yourself, focus on the skiing that you can do, focus on the technique and on the energy,” said Alexis Pinturault, the reigning Alpine World Cup overall champion and a three-time Olympic medalist for France. “Of course it makes a difference — and we know it.”

What sort of difference can the weather make on the clock in Alpine skiing?

As much as a second, Pinturault estimates.

That's significant. The margin between gold and silver was no more than 13 hundredths of a second in half of the 10 women’s or men’s races at the 2018 Games.

“You only have so many weather days built into the schedule,” said Shiffrin, who once again plans to participate in slalom, giant slalom, downhill, super-G and Alpine combined. “At the end of the day, you can make every move right. You can be rested and ready to go strong. And it still can be totally messed up for, essentially, reasons that are completely out of your control. I don’t really love that idea.”