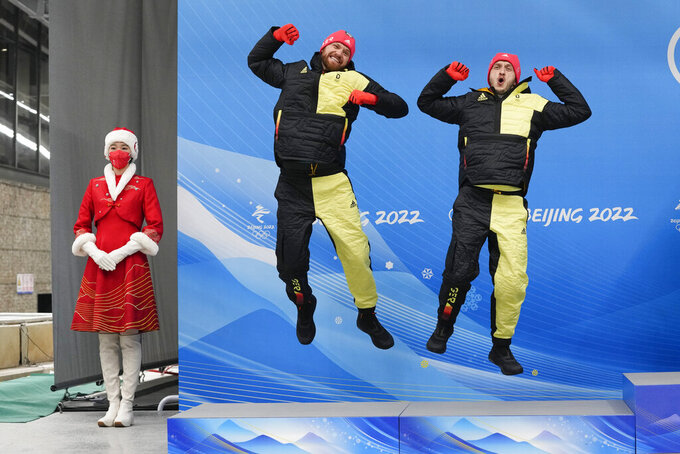 Toni Eggert and Sascha Benecken, of Germany, celebrate winning the silver medal the luge doubles at the 2022 Winter Olympics, Wednesday, Feb. 9, 2022, in the Yanqing district of Beijing. (AP Photo/Mark Schiefelbein) 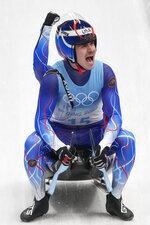 BEIJING (AP) — Another day, another German Olympic luge threepeat. The best sliding nation in the world is leaving absolutely no doubt at the Beijing Games.

Tobias Wendl and Tobias Arlt won the doubles title at the Olympics on Wednesday, their third consecutive gold medal in the event. They finished two runs in 1 minute, 56.653 seconds, holding off German teammates Toni Eggert and Sascha Benecken by 0.099 seconds.

“Indescribable," Wendl said after he and Arlt won their fifth Olympic gold overall, when the three doubles titles are added to two relay wins — with a chance at another on Thursday. “This one was the toughest."

Thomas Steu and Lorenz Koller of Austria survived a wobble just before the finish line to get the bronze, 0.511 seconds off the winning time.

With International Olympic Committee president Thomas Bach among those looking on, Zack DiGregorio and Sean Hollander were 11th for the U.S. in their Olympic debut. They were surprise qualifiers for the Beijing Games, getting the berth after the top American doubles team of Chris Mazdzer and Jayson Terdiman faltered late in the World Cup season and opening the door for the newcomers.

“It was amazing," DiGregorio said. “So much in luge is a team thing, but tonight was about us. We were the only doubles team for the U.S. and it was really just a moment for me and Sean where we could slide and have as much fun as we could."

“We're really looking forward to tomorrow," said DiGregorio, who let out a big scream of celebration after the second run.

There’s nothing like experience in sliding sports, particularly in doubles luge. It’s not an accident that the six oldest sliders in the Olympic doubles field — the Latvian brothers team of Juris Sics (38) and Andris Sics (36), then Wendl and Arlt (both 34), then Eggert (33) and Benecken (turns 32 next week) — just happened to be the primary contenders that everyone picked to do well going into Wednesday night.

Combined, the U.S. sled was the youngest in the Olympic field. Hollander turns 22 on Friday and was the sixth-youngest slider in the doubles competition; DiGregorio is 20, the third-youngest in the field. The Sics brothers made their World Cup debut together in November 2004, one day before DiGregorio turned 3.

“We're just going to build from here," Hollander said. “This is great momentum going forward. We finally have a sled that we feel comfortable on and can go fast, so we're just going to take this energy that we have now into next season."

There are four luge events in the Olympics and Germany is 3-for-3 in golds so far, with Johannes Ludwig winning the men’s luge title, Natalie Geisenberger winning the women’s luge crown and now the Wendl-Arlt sled prevailing. Those four sliders will try to finish off an Olympic sweep in the relay, and Germany will be heavily favored.

And really, none of this should be a surprise: There have now been 50 Olympic luge races, and a German sled has won gold in 37 of them.

Here in China, they’re even raising the bar.

Back-to-back-to-back Olympic luge championships were a rarity — that is, until the last two days. Germany’s Georg Hackl had been the only person to pull off that feat, winning the gold in men’s luge in 1992, 1994 and 1998.

Now, three other sliders are in the Olympic luge threepeat club: Geisenberger won her third straight women’s gold on Tuesday, and Wendl and Arlt joined them on Wednesday.

“You can count on us every four years," Wendl said.

Said Eggert: “They deserved to win."

There were only 17 sleds in the field after Austria’s team of Yannick Mueller and Armin Frauscher had to withdraw. Mueller broke his left forearm in a training crash earlier this week.