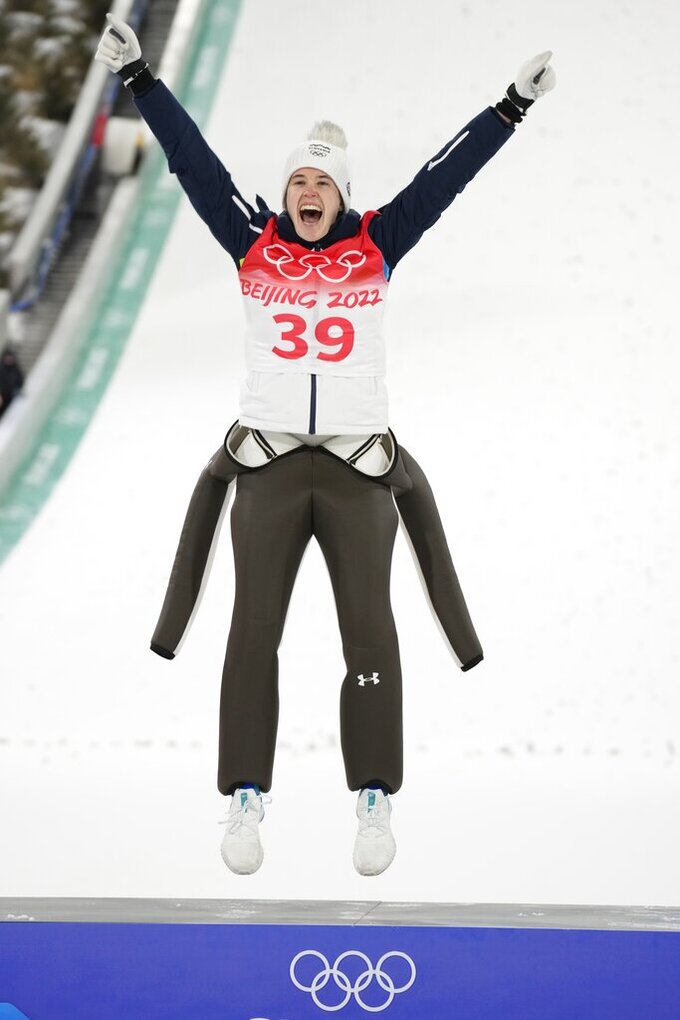 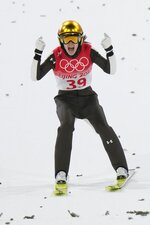 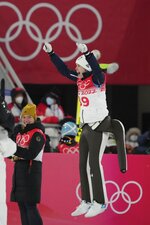 The Slovenian ski jumper won Olympic gold in women's ski jumping on Saturday night, four years after after having the fewest points in the same event at the Pyeongchang Games.

“I didn't handle the pressure," she recalled.

Bogataj certainly did in China.

The Japanese star was a favorite at least to medal, but she finished fourth and the disappointment was palpable. Takanashi cried as she took off her skis following her final jump, which she knew wouldn't be good enough.

After Althaus and Kriznar stepped on the podium, Bogataj took her spot atop the structure and had one of her biggest jumps of the night.

“Maybe that was the energy of the day," she said with a giggle. “When two good friends stand on the podium on Olympic Games, that’s just a dream. We have very good spirit and me and Nika feel like sisters. We are very good friends. Our dreams came true.”

The 21-year-old Kriznar might've been even happier than Bogataj.

Althaus was No. 1 after the first round, but insisted she was not disappointed to finish second.

In a surprise, Takanashi didn't earn a spot on the podium. She has won a record 61 World Cup events, won bronze four years ago in South Korea and finished fourth at the 2014 Olympics.

Norway's Maren Lundby, who won gold at the 2018 Olympics, chose not to defend her title because she decided to make her physical and mental health priorities.

Marita Kramer of Austria, the top-ranked woman in World Cup standings, was not cleared to compete after testing positive for COVID-19.

The absence of Lundby and Kramer cleared the way for the field of women that jumped on a cold night with a wind chill of minus-13 Celsius (8.6 degrees Fahrenheit) as gusts made flags from participating nations flap.

Tickets are not for sale at the Beijing Olympics due to the COVID-19 pandemic, but about 150,000 invited spectators are expected to attend events. About 500 of those fans were in the stands at the National Ski Jumping Center, one of the jewels at the Beijing Games.

Women jumped for gold for the third time, and each Olympics has had a unique winner. Lundby, who was a dominant force in the sport, won four years ago, and Germany's Carina Vogt finished first at the inaugural Olympic ski jumping event for women at the Sochi Games in 2014.

“I hope ski jumping in Slovenia for girls will become more popular," Bogataj said. “Maybe in the future it will be as popular as the boys.”

On Saturday night, the final round was delayed by 15 minutes to give the athletes a brief break after the first round took more time than expected.

Althaus jumped 105.5 meters (346 feet) had 121.1 points in the first round. She was closely followed by a trio of Slovenians. In the end, she came up just short of gold.

Anna Hoffman, the only American woman to jump in China, finished 37th in her first Olympic appearance.