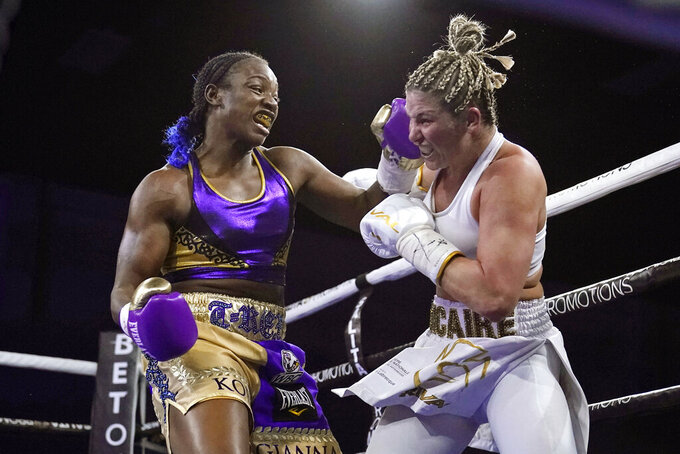 FILE - In this March 5, 2021, file photo, Claressa Shields, left, hits Marie-Eve Dicaire with a left during the fifth round of a boxing bout for the women's super welterweight title in Flint, Mich. Shields did it all in boxing. Two-time Olympic gold medalist. Professional titles in three weight classes. Now she'll try to conquer MMA, starting with her pro debut for Professional Fighters League on Thursday night, June 10, 2021, in Atlantic City, N.J. (AP Photo/Carlos Osorio, File)

Claressa Shields has narrowed her walkout music for her MMA debut down to three songs. She needs a tune she can dance to on the way to the cage, though the gold gladiator costume and her customary entrance theatrics will be left behind with her boxing gloves.

“I actually need to make more TikTok videos,” she said, laughing. “I dance all the time. At the gym. In between rounds of sparring. I’m always doing some kind of dancing. When I walk out and I’m dancing and singing, that’s how I feel calm. I can’t walk out all serious.”

Her mood switched inside the boxing ring. Shields was fierce, focused, and carried that Flint, Michigan chip with her all the way to two Olympic gold medals and championships in three professional weight classes.

She was undefeated, unchallenged and conquered boxing as the self-proclaimed GWOAT. Yes, the Greatest Woman Of All Time.

On Thursday, the 26-year-old Shields begins another attempt at greatness -- just six months after she started mixed martial arts training -- when she makes her pro debut in a 155-pound fight against Brittney Elkin in the Professional Fighters League.

Shields says bring on the haters who doubt her skills will translate to MMA.

“What if your MMA debut goes all wrong and you lose? How are you going to feel,” she says, mocking some reporters' questions. “Why would you ask me something stupid like that? Who thinks about losing?”

Certainly not Shields, who went 11-0 over five years and became the fastest fighter in boxing history — male or female — to become a three-division world champion. She took time out of her boxing prime and trained with former UFC champions Jon Jones and Holly Holm, most of her days since December were spent at the Jackson Wink MMA Academy in Albuquerque, New Mexico.

“I let the coaches know right off the bat, I’m an aggressive person,” she said in an interview with The Associated Press. “Whatever somebody dishes at me, I can dish it back and I can take it. Once they realized that, it was a game changer for us in camp.”

She knew how to use her hands and mostly used pads to work on her kicks. She learned the intricacies of MMA, like how to defend, get off the cage and rebound from takedowns. Hitting the mat isn’t necessarily the death knell it can be in boxing, and Shields had developed her own specific techniques to stand back up from the often inevitable ground fighting.

“Oh, that’s it,” she said, laughing about the experience.

Make no mistake, Shields has not quit boxing and still has challengers she’d like to fight. She wants a rematch with middleweight champion Savannah Marshall, the last person to beat her in an amateur bout in 2012. Shields defeated Franchón Crews-Dezurn in her pro debut in 2016 but wants another bout now that the French fighter holds the super middleweight crown.

Beyond that, not much else appeals to Shields.

“What would be the difference between being a 12-time world champ and a 20-time world champ in women’s boxing? It’s nothing,” she said. “It’s no different. I was already at the cap of where I could make money. I was at the cap of what the networks would give me, what they would allow. The main thing was, I was a main event fighter making a certain amount of money.

“Where’s my pay-per-view opportunity? Where is my $1 million payday? Women’s boxing doesn’t give you the opportunity. I just felt like it was unfair to me to put so much time and energy into boxing and not be reaping what I’m sowing. All I’ve got is a bunch of belts in my drawer. I’ve got some money in my bank account. But it’s not the kind of money I should have. I should have way more money.”

Shields saved her money but never commanded even a high six-figure payout for a title fight -- she says she never made more than $350,000 for one fight, a professional pittance to the kind of cash earned on the men’s side by, say, a YouTuber in an exhibition bout. Because women’s boxing is still a niche sport, she never achieved the mainstream fame and fortune of her fellow Olympic peers like Michael Phelps and Simone Biles.

Over the past decade MMA has been much kinder to women earning main event spots and richer paydays. Kayla Harrison, a two-time Olympic judo gold medalist, has emerged as the face of PFL and has a 9-0 record. Ronda Rousey, Amanda Nunes, and Rose Namajunas are among the women that blossomed into main event stars in UFC, with popularity and pay that rivaled or surpassed many male fighters.

Shields said she’s already reaped the benefits of the MMA jump, including an endorsement deal with a major headphone company and got an all-access docu-series on ESPN-plus. She also signed for acting roles in two upcoming movies and is involved in a planned movie about her life that has been delayed by the pandemic.

“I haven’t even fought yet and all this stuff is coming to me,” she said. “And there’s going to be more the more successful I am. When you’re successful, people want to invest in you. I didn’t get that luxury in boxing no matter how great I was or how bad I beat my opponent. I never got that opportunity.”

The PFL opportunity includes a main event spot in Atlantic City, New Jersey against Elkin (3-6) on the ESPN2 main card that starts at 10 p.m. EDT.

“It’s going to be awesome for my personal experience and journey,” Elkin said. “I’ve been fighting for 12 years and this is definitely the biggest match I’ve been in.”

Shields hoped to have one more MMA fight in August and wants to “squeeze in” two boxing matches this year before deciding if she’ll attempt to win the PFL title in 2022.

Shields still had to decide on a walkout song days before the fight. But she was clear on her message to doubters that she’ll struggle in boxing -- Shields smiled over a Zoom as she flashed two middle fingers.

“I’m not a person who will let people who don’t personally know me get to me,” she said.

But Shields wants the fight world to know she can become the next big thing in MMA.