Olympic sport to talk with athletes amid anger over changes 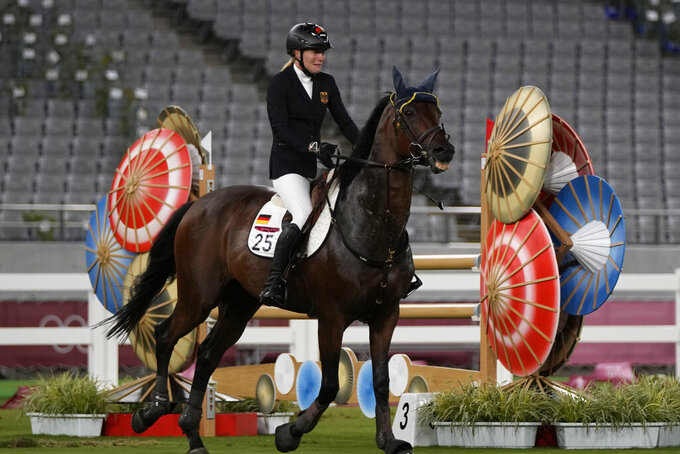 FILE - Annika Schleu of Germany cries after she couldn't control her horse to compete in the equestrian portion of the women's modern pentathlon at the 2020 Summer Olympics, in Tokyo, Japan, on Aug. 6, 2021. Amid a bitter divide with Olympic athletes over the removal of horse riding from modern pentathlon, the sport’s governing body on Monday, Nov. 8, 2021, invited them to talks this week to consult athletes on which sport will replace riding following a horse abuse incident at the Tokyo Olympics. The horse that refused to compete in jumping for the German leader of the women’s competition was hit by a team coach, who was ordered to take lessons on animal welfare. (AP Photo/Hassan Ammar, File)

GENEVA (AP) — Amid a bitter divide with athletes over the removal of horse riding from the Olympic event of modern pentathlon, the sport’s governing body on Monday invited them to talks this week.

The Monaco-based UIPM said it would host a video call Friday to consult athletes on which sport will replace riding following a horse abuse incident at the Tokyo Olympics.

A horse that refused to compete in jumping for the German leader of the women’s competition was hit by a team coach, who was ordered to take lessons on animal welfare.

The UIPM has since provoked confusion among athletes in handling the process to change one of the most traditional Olympic sports in time for the 2028 Los Angeles Games.

The decision by the UIPM executive board to remove riding leaked last week and then was denied before being confirmed, with a letter to athletes acknowledging “we know that this information will be surprising and even shocking to you.”

The UIPM said its place in the Olympics beyond the 2024 Paris Games could not be taken for granted, hinting at pressure from the IOC to change the sport.

Speculation that cycling would replace riding was denied Sunday by long-time UIPM president Klaus Schormann on a German television show. Schormann said the choice of replacement sport had already been taken and that it was not cycling, but he could not yet reveal which it was.

The UIPM backtracked on those comments Monday, claiming media reports were “inaccurate” and there had been no decision without the athletes first being involved.

“The consultation process is open, and I would like to clarify that no decision about the fifth discipline has been taken,” Schormann said in a UIPM statement.

The governing body is expected to decide at a congress on Nov. 27-28. Schormann is running unopposed for re-election after 28 years as UIPM leader at the same meeting.

Still, hundreds of athletes — including both gold medalists from Tokyo — last week signed a letter of no confidence in the German president and his executive board, and urged them to resign.

Modern pentathlon has a special place in Olympic lore. It was created by the founder of the modern Games, Pierre de Coubertin, as a test for a complete all-around athlete. It was first staged at the 1912 Stockholm Games.

The traditional five-day version comprising pistol shooting, fencing, swimming, horse riding and running has been scrapped. A one-day version in Tokyo, with a combined running and shooting event, still proved controversial with athletes required to compete with a horse they have not ridden before.