Shiffrin back at skiing's summit after Olympic struggles 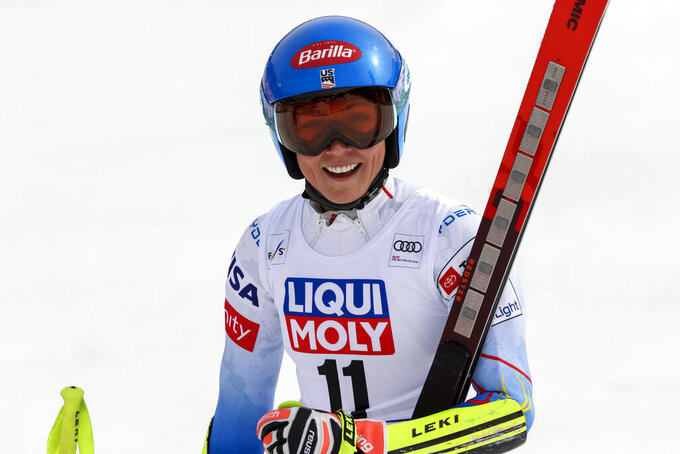 Far away from her mystifying struggles at the Olympics, Mikaela Shiffrin soared back to the summit of Alpine skiing Thursday.

A season that risked being defined by zero medals from six events in China instead ended in triumph in the French Alps.

Shiffrin clinched the overall World Cup title Thursday, the sport’s most coveted prize, with standout racing in the speed disciplines on back-to-back days at the weeklong season finals.

An expected duel this week with defending overall champion Petra Vlhová was settled with two races left this weekend in their favored slalom and giant slalom.

“It’s been some high moments this season and it’s been some really difficult moments as well,” Shiffrin said. “Ending it on a high (and) finding some really nice moments on the last races, that’s really important and very special.”

The fourth giant crystal globe trophy in her career, and first since 2019, lifts the 27-year-old Shiffrin to the level of former teammate Lindsey Vonn in World Cup history.

Only the six overall titles of Annemarie Moser-Pröll, the Austrian great who dominated downhill in the 1970s, stands above the two Americans.

It was a surprise win in downhill Wednesday that fueled Shiffrin to the title. She backed it up with a smartly judged second place Thursday in super-G to pull away from Vlhová, who failed to score points in either race.

Suddenly her Olympic struggles just a month ago seem like the distant past.

It continued an up-and-down season in which five wins and 14 podium finishes in just 24 World Cup events made her inconsistent Olympics such an outlier.

It also included an enforced break because of a COVID-19 infection in December and still coming to terms with her father’s death in an accident at the family home in Colorado two years ago.

“This last week alone was some very low moments (thinking) I should just go home because I don’t think I truly have a chance,” Shiffrin said Thursday. “And somewhere we’re here now.”

The “we” could as easily have referred to her partnership with boyfriend Aleksander Aamodt Kilde, the Norwegian who also celebrated a success this week.

Kilde placed fourth in the men’s super-G Thursday but that discipline title was already locked up, and he also added the downhill crystal trophy Wednesday.

Racing one hour after the women, Kilde was at the start further up the mountain at the moment of his girlfriend’s victory. Instead, another Norwegian, Ragnhild Mowinckel who had just won the super-G race, was first to share a celebratory hug with Shiffrin.

The men’s race was won by Vincent Kriechmayr, adding to his downhill success Wednesday on the Eclipse course at Courchevel.

Kriechmayr, who won gold medals in both speed events at the 2021 world championships, is set to defend those titles on the same slope next February when Courchevel host men’s races at the 2023 worlds.

Women’s races at those worlds will be at nearby Méribel, where the Alpine combined title should be defended by Shiffrin after processing “one of the most confusing seasons I’ve ever had.”