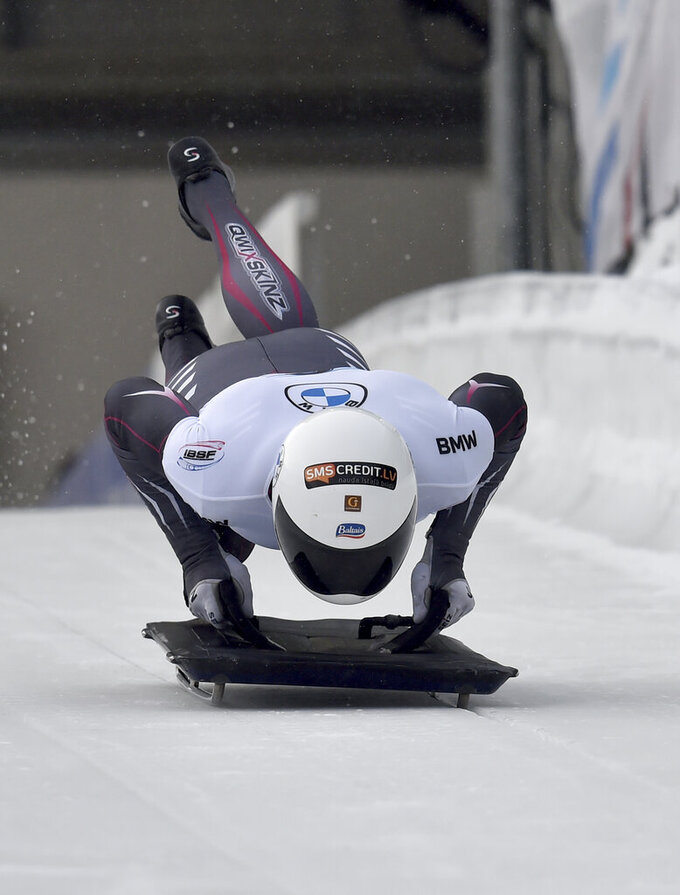 There wound up being five sliders chosen as part of the U.S. Olympic skeleton team that competed in the 2006 Turin Games.

Of those, four are long retired. Chris Soule stopped sliding after those Olympics. Kevin Ellis stopped in 2009. Zach Lund and Eric Bernotas both last raced in 2010.

The other is Katie Uhlaender.

More than a decade after all her Turin teammates hung up their sleds, she’s still going — apparently now with a final finish line in sight. Uhlaender is in position to compete in her fifth, and she says final, Olympics.

“I have worked extremely hard and sacrificed everything over the last four years to pursue the Beijing Games,” Uhlaender said. “I have dedicated most of my life to winning an Olympic medal in skeleton.”

She was the first women’s skeleton athlete to compete in four Olympics when she was part of the Pyeongchang Games in 2018 — so, obviously, if she starts the race at these Beijing Games she’ll be the first five-timer as well.

And Uhlaender might not be a medal favorite, but it’s certainly not far-fetched to think she can get to the podium. Uhlaender is one of 11 women with at least four top-10 finishes in World Cup races this season.

The gold favorites, though, are clear: Kimberley Bos of the Netherlands and Martins Dukurs of Latvia were the winners of the women’s and men’s World Cup overall season championships, and that means they’ll be the consensus picks to win the big prize when they get to the Beijing Games.

She won her first World Cup overall title this season. Dukurs won his 11th -- but has yet to capture Olympic gold. He doesn’t think the World Cup crown guarantees him anything at the Olympics.

Skeleton sliders go down the track headfirst, often reaching speeds exceeding 80 mph (129 kph). Athletes typically begin with one hand on their sled as they sprint alongside, then leap aboard for the ride down the track. The better the start time, the more momentum and speed they’ll carry into the first few turns. A great start isn’t crucial, but definitely helps.

There were six different men to win World Cup gold medals this season, but in the last four races one family has dominated. Martins Dukurs got all three of his victories in that span and the other went to his brother, Tomass Dukurs. Germany’s Axel Jungk and Christopher Grotheer should be in medal contention as well; they finished second and third, respectively, in the World Cup standings.

The last World Cup race had sliders from nine countries in the top nine spots, certainly suggesting that plenty of nations will head to the Beijing Games believing they have legit medal hopes. Bos, Elena Nikitina — who is from Russia, but cannot technically race under her nation’s flag at these Games because of doping sanctions against the Russians — and Germany’s Tina Hermann were all two-time winners this season. Austria’s Janine Flock will be a popular medal pick as well and newcomer Valentina Margaglio of Italy had four top-fives in seven World Cup finishes this season.

John Daly of the U.S. ended his bid to get back to what would have been a fourth Olympics earlier this winter. It becomes his third, and likely final, retirement.

Daly — one of the top U.S. men’s sliders ever — never got his Olympic medal. And while he wanted to be best known for his hair and hair-care tips in a sport where athletes wear helmets, Daly should be better remembered for the way he handled a disaster at the Sochi Games where a mistake on the fourth and final run cost him his medal hopes.

By any measure, this four-year Olympic cycle was a major disappointment for the U.S. The Americans won two medals in World Cups over those four years, both of them bronze in women’s events. The best finish by an American man this season in a World Cup race was an 18th-place showing by Austin Florian in the finale at St. Moritz. He didn't make the Olympic team; the lone U.S. men's spot went to Andrew Blaser.