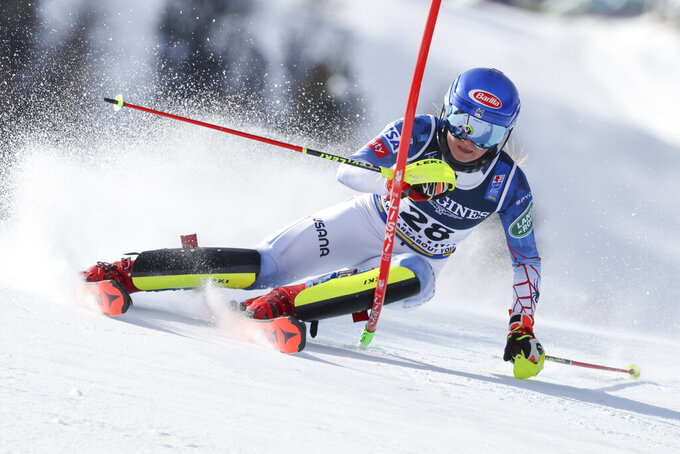 FILE - Mikaela Shiffrin competes during the slalom portion of the women's combined race at the alpine ski World Championships in Cortina d'Ampezzo, Italy, in this Monday, Feb. 15, 2021, file photo. Shiffrin is certain she wants to participate in every individual women's Alpine ski race at the Beijing Olympics. She already owns three Olympic medals, including two golds. (AP Photo/Marco Trovati, File)

First things first for Mikaela Shiffrin: She is certain she wants to participate in every individual women’s Alpine ski race at the Beijing Olympics.

The 26-year-old from Colorado also knows that was her aim for the last Winter Games — and things did not quite work out according to plan back then.

So as Shiffrin gears up for the start of the World Cup season this month, then looks further down the road toward the trip to Asia in February, she is examining various ways in which she can beat her best for both. That means how she performs while on her skis, speeding down the side of a mountain, of course, as well as areas she can work on while away from the slopes.

“Something I’m dreaming about right now is to be able to compete in each event in China. But that means I have to do a lot more preparation, mentally,” Shiffrin said from Austria on Friday, during a video conference with reporters. “Just understanding how that is going to affect me mentally and physically throughout, essentially, the three weeks that we’re there.

"So it definitely takes a lot of my focus to think: What are the boxes we have to check, even totally outside of skiing and technique and tactics and the physical side of things? What are the boxes we need to check to make sure that I have some comfort level staying in a place that I’ve never been before for three weeks and dealing with the jet lag and getting over that as fast as possible?”

Shiffrin owns three Olympic medals, two golds. She also has won 69 World Cup races — only Ingemar Stenmark, with 86, and Lindsey Vonn, 82, have more in the sport's history — along with a trio of overall titles.

While careful to note some caveats, including that she needs to ski well enough to earn a spot on the U.S. team for the five individual women's Alpine events in Beijing, Shiffrin would love to be in the starting gate each time; giant slalom Feb. 7, slalom Feb. 9, super-G Feb. 11, downhill Feb. 15 and combined Feb. 17.

Then again, that was the idea at the 2018 Pyeongchang Olympics, too, before weather-related rescheduling contributed to Shiffrin participating in three races. She left South Korea with a gold in giant slalom, silver in combined and a fourth-place finish in slalom.

“I definitely walked away with eyes wide open after that,” Shiffrin said Friday.

“There’s a whole box of things that we can unpack with just, sort of, Olympic preparations and how how much I do care about putting in my best effort to make all events happen? But also knowing that so many things can change, not only between now and then, but just between the start of the first Olympic race to the end of the Games, that that plan could very, very easily change at the drop of a hat. So there’s that side of things,” she said. “And obviously, you go to the Olympics and hope for medals. That’s the dream. ... But then you have the World Cup season.”

Yes, she is not ignoring that.

When the calendar opens Oct. 23 in Sölden, Austria, Shiffrin will make it a point to live up to what she called “another big dream” — contending for the overall trophy again.

That wasn't a possibility last season, when she avoided speed races until the world championships after returning from a 10-month hiatus brought about by the death of her father, the coronavirus pandemic and an injured back.

“There is never going to be a guarantee that I can win it again, and it’s ... really hard to say if that’s even a realistic goal for this season — or ever again in my career," Shiffrin said. "But I’m trying to put in the work to make that a possibility.”