Ski worlds to be held in 2021 despite request to delay 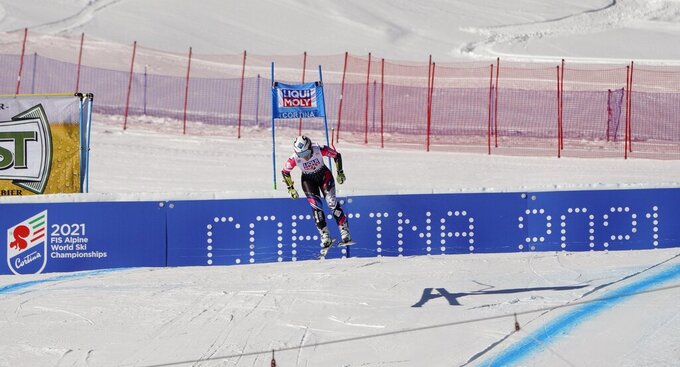 FILE - In this Jan. 20, 2019 file photo, Liechtenstein's Tina Weirather speeds down the course as a banner advertising the ski world championships in Cortina d'Ampezzo is seen in the background, during an alpine ski, women's World Cup super-G in Cortina D'Ampezzo, Italy. The International Ski Federation governing body on Thursday July 2, 2020, has rejected a request by Italian organizers of the 2021 Alpine ski world championships to postpone the competition by one year amid uncertainty during the pandemic. (AP Photo/Giovanni Auletta, file)

GENEVA (AP) — A request by the organizers of next year's skiing world championships in Italy to postpone the event by one year was rejected Thursday by the International Ski Federation.

FIS ruled that the event will go ahead from Feb. 9-21, 2021, in Cortina d’Ampezzo — the highlight of an Alpine season that faces challenges to find safe protocols for international travel and attending races in Europe, North America and China.

The Veneto region of northern Italy was hit hard by the coronavirus and the season-ending World Cup races in Cortina in mid-March were canceled. That week-long event was to be a test for the 2021 worlds.

“The last month of efforts to come to this solution demonstrates the strong collaborative spirit of the ski family and stakeholders.” FIS president Gian Franco Kasper said.

Organizers in Italy have said they expect losses of about 30 million euros ($34 million) if the worlds are also canceled. They asked for a postponement to March 2022, which would be only weeks after the Beijing Olympics.

“But we will be ready in any case and we will show that these world championships can change the history of a region despite the current difficulties," Alessandro Benetton, president of the Cortina organizing committee, said in a statement.

Italian racer Sofia Goggia, the 2018 Olympic downhill champion, said she was “happy for Cortina because it will host the first major international event after the coronavirus epidemic.”

Cortina, which hosted the 1956 Olympics, will co-host the 2026 Winter Games with Milan and use the worlds as a showcase for the resort.

The women's World Cup downhill on the Olympia delle Tofane course each January is one of the most scenic in the sport with a signature jump between tall outcrops of jagged rock.

The Dolomites venue was awarded the 2021 worlds by FIS after missing out as a candidate four straight times from 2013-19.