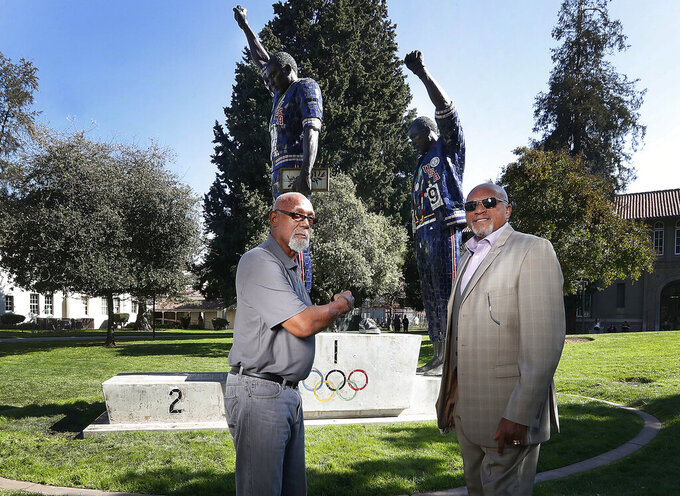 FILE - In this Oct. 17, 2018, file photo, John Carlos, left, and Tommie Smith pose for a photo in front of statue that honors their iconic, black-gloved protest at the 1968 Olympic Games, on the campus of San Jose State University in San Jose, Calif. Smith, Carlos and Gwen Berry are among the more than 150 educators, activists and athletes who signed a letter Thursday, July 22, 2021, urging the IOC not to punish participants who demonstrate at the Tokyo Games. ( (AP Photo/Tony Avelar, File)

TOKYO (AP) — Tommie Smith, John Carlos and Gwen Berry are among the more than 150 athletes, educators and activists who signed a letter Thursday urging the IOC not to punish participants who demonstrate at the Tokyo Games.

The five-page letter, published on the eve of the Olympics, asks the IOC not to sanction athletes for kneeling or raising a fist, the way Smith and Carlos did at the 1968 Mexico City Games.

Berry, the American hammer thrower who triggered much of this debate, has said she intends to use her Olympic platform to point out racial inequality in the United States. She turned away from the flag when the national anthem played while she was on the medals stand at the Olympic trials last month.

The IOC has made changes to its Rule 50 that bans political demonstrations at the Games, and has said it will allow them on the field, so long as they come before the start of action. Players from five Olympic soccer teams took to their knees Wednesday before their games on the opening night for that sport.

But the IOC did not lift the prohibition on medals-stand demonstrations, and has left some of the decision-making about punishment up to individual sports federations.

“We do not believe the changes made reflect a commitment to freedom of expression as a fundamental human right nor to racial and social justice in global sports,” said the letter, which was posted on the website of the Muhammad Ali Center and also signed by Ali's daughter, four-time boxing world champion Lalia Ali.

The letter disputed the IOC's long-held position that the Olympics should remain neutral, arguing that “neutrality is never neutral.”

The letter also took issue with an athlete survey conducted by the IOC athletes' commission that found widespread support for Rule 50. The commission cited the survey as a central reason for making the recommendation to largely keep the rule intact.

"The report provides no information on racial/ethnic demographics or insights into the research instrument used and steps taken to strengthen the validity and trustworthiness of the data,” the letter said.

The largest cross-section of the 3,547 athletes surveyed came from China (14%), where protests were overwhelmingly frowned upon by those who answered the questions. U.S. athletes were the second-largest contingent to answer (7%), followed by athletes from Japan (6%).

Among the others to sign the letter were fencer Race Imboden, who, along with Berry, was placed on probation by the U.S. Olympic and Paralympic Committee for demonstrating on the medals stand at the Pan American Games in 2019. The USOPC later changed its stance and will not sanction athletes who protest in Tokyo.

Also signing was Harry Edwards, the longtime activist who organized the Olympic Project for Human Rights, which led to the gestures in Mexico City by Smith and Carlos.