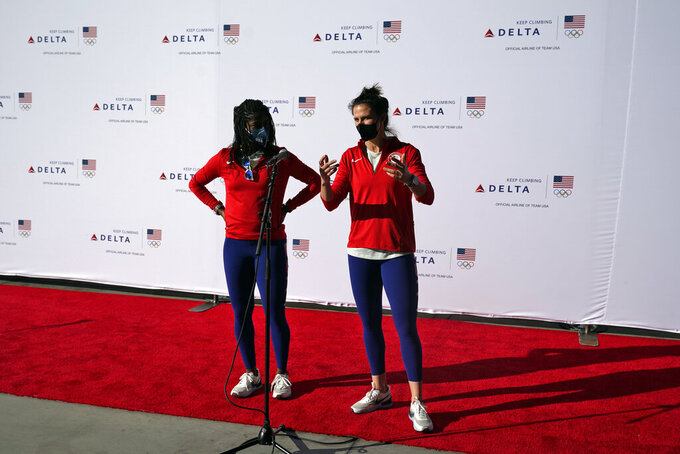 BEIJING (AP) — Brittany Bowe is having quite an Olympics — before she even hit the ice.

First, she claimed another speedskating race in Beijing — or, more appropriately, reclaimed it — when a third spot opened up for the Americans in the 500 meters.

Then, Bowe was selected to be one of the U.S. flag bearers in Friday night's opening ceremony at the Bird's Nest stadium after the original choice, bobsledder Elana Meyers Taylor, was forced into isolation by a positive COVID-19 test.

“It's a shame that Elana can't do it because we all felt she was the deserving front-runner to have that honor,” U.S. speedskating coach Ryan Shimabukuro said after Friday's training session at the Ice Ribbon oval, which Bowe skipped to rest up for her evening duties.

“But Brittany is obviously taking that responsibility seriously and she's going to lead that delegation like the champion she is. I think there's no better runner-up than Brittany to do that.”

Bowe, a six-time world champion and bronze medalist at the 2018 Pyeongchang Games, finished first in the 500 at the U.S. trials last month. But she gave up her spot in Beijing after event favorite Erin Jackson slipped in her heat and shockingly finished third overall.

At the time, the Americans had only two guaranteed spots in the event, so Bowe withdrew to ensure that Jackson got a chance to skate in Beijing.

However, the U.S. picked up a third skater after the International Skating Union recently issued its final allotments.

So Bowe is back in, joining Jackson and Kimi Goetz.

Jackson, the first Black woman to win a World Cup race, is one of the medal favorites in the 500.

Bowe's best races are the 1,000 and 1,500, both of which are considered strong medal possibilities for the 33-year-old Floridian.

But she's no slouch in the 500, which made her original withdrawal all the more poignant to Jackson and Bowe's other teammates.

“All things considered, to give up an opportunity for a medal is insane,” Joey Mantia said with a smile after his training session. ”What she did was absolutely crazy. I think it’s an amazing gesture that she was able to bring herself to do, and not knowing for sure if she was going to get that spot or not because our criteria for how we get spots is a little open-ended up until the last minute.”

To Mantia, that made it all the more fitting that Bowe got a chance to carry the U.S. flag along with curler John Shuster.

“She definitely deserves it,” Mantia said. “We were pushing hard for her, so it was really nice to see that.”