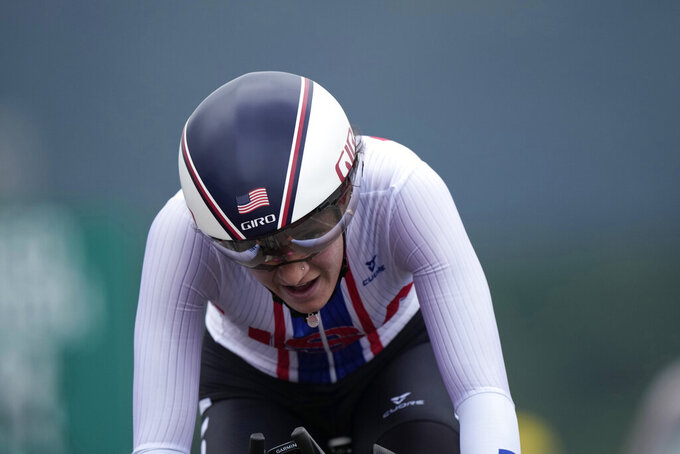 MISHIMA, Japan (AP) — The new CEO of USA Cycling made it perfectly clear the Americans were targeting seven medals at the Tokyo Games.

Through six events, they've yet to win one.

The confidence-boosting ride by Brandon McNulty, who made a long-shot bid to medal in the men's road race and finished a respectable sixth on the first full day of competition, has been followed by one disappointment after another.

They had targeted a medal in the women's race, where the course appeared to fit the climbing ability of the retiring Ruth Winder and the sprint capability of Coryn Rivera. But a messy competition won by a forgotten rider in the breakaway ended with Rivera finishing seventh for the best ride by the U.S.

“Obviously, not what I want, but I worked hard for it. I cramped, so I gave it my all,” Rivera said. “I think the girls did an outstanding job. We did the best that we could. We tried. And I think we did our best.”

Then, in the time trial, where the men were predictably well off the pace, the hopes for former world champion Chloe Dygert to continue American dominance in the race against the clock were over by the first time check. Dygert was more than 50 seconds behind at that point, and she kept losing time all the way to a seventh-place finish.

In fact, she was beaten by 46-year-old teammate Amber Neben, whose fifth-place ride is the best by an American yet.

“I’m a little bit disappointed,” Neben said afterward. "I rode hard. I left it all out there. I was really hoping to medal today. It’s hard when you’re close but not quite there. No regrets. No complaints about my effort. It was good for today.”

Good being a relative term.

Things haven't been very good for the Americans yet.

Now the pressure is on BMX and track cycling.

First up is the BMX race, which began Thursday with qualifying runs and continues Friday with medal races. It's an event the Americans have performed well in since it was added to the program in Beijing. Connor Fields captured gold and Alise Willoughby took silver in Rio, and the U.S. team won three medals in the inaugural competition.

Then comes the newcomer to the Tokyo Games, the freestyle competition. Both of the American teams are ranked No. 1 in the world. Nick Bruce and Justin Dowell, who are both ranked in the top five, will compete for the men and Hannah Roberts and Perris Benegas — who combined have won the last three world championships — will compete for the women.

“I'm not going to look the timing gift-horse in the mouth,” USA Cycling chief executive Rob DeMartini said of the addition of freestyle to the program. “We're very confident in our male and female teams.”

Then there's the track program that begins next week.

Gavin Hoover will ride the omnium while teaming with Adrian Hegyvary in the return of the two-person Madison to the program. Megan Jastrab and Jennifer Valente will race the women's Madison as it makes its Olympic debut, and Valente will add the multidiscipline omnium to her program with Maddie Godby contesting the keirin and sprint.

The only event where the Americans are virtually assured a medal is the women's team pursuit.

After taking the silver medal at the past two Olympics, the U.S. team has won the past three world titles while consistently breaking their own world record. So the question is not so much whether they will medal but whether they will finally beat the British, who crushed their golden hopes in London and four years later in Rio.

“You can can never underestimate the British. They can pull together great teams and arrive on the day with the form that's necessary,” said Jim Miller, who heads USA Cycling's high-performance program. “But we have a really good team, you know, and I don't think it would be far-fetched to say we're the team to beat.”