Tensions sparking change in US Olympic world, but how much? 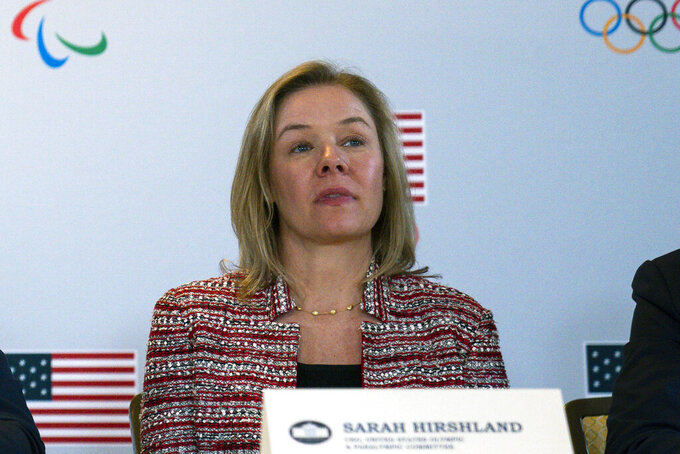 FILE - In this Feb. 18, 2020, file photo, United States Olympic and Paralympic Committee CEO Sarah Hirshland listens during a briefing with the U.S. Olympic and Paralympic Committee and Los Angeles 2028 organizers in Beverly Hills, Calif. At their keynote addresses at this week's annual assembly of U.S. athletes and administrators, both CEO Sarah Hirshland and chair Susanne Lyons said the federation's top-line priority for the upcoming year is on athlete excellence and expanding revenue. (AP Photo/Evan Vucci, File)

COLORADO SPRINGS, Colo. (AP) — Changes are coming at the U.S. Olympic and Paralympic Committee, sparked by frustration with years of flat revenue and what some portray as heavy-handed management in the wake of sex-abuse scandals that upended the movement in America.

At their keynote addresses at this week's annual assembly of U.S. athletes and administrators, both CEO Sarah Hirshland and chair Susanne Lyons said the federation's top-line priority for the upcoming year is athlete excellence and expanding revenue. This is a shift after years of placing athlete safety above all else after the scandals exposed what critics said was the USOPC's single-minded focus on money and medals.

Lyons' term as chair ends at the close of 2022. A candidate to replace her is Dexter Paine, a current USOPC board member and former chair of U.S. Ski & Snowboard who is closely aligned with the national governing bodies (NGBs) that run the individual sports and have largely felt like they've been undermined in the aftermath of the Larry Nassar scandal.

Also running is former LA 2028 CEO Gene Sykes, who played a key role in bringing the Summer Olympics back to Los Angeles. The July 8 vote to pick Lyons' successor will be a significant indicator of what the focus will be at the USOPC in an ever-shifting dynamic between athletes, NGBs and international relations.

In an interview with The Associated Press, Lyons said what some see as a paradigm shift is driven by tough economic conditions, along with abysmal TV ratings for the past two Olympics that has raised concern that fans are losing their love for the Olympics. The U.S. is now six years from hosting its first Summer Games since 1996, and officials know the Olympics in Los Angeles have to be parlayed to stoke passion in the U.S. for the entire industry.

“For a while, it was kind of considered terrible if you actually said that you wanted to win a medal,” Lyons said. “It was like, ‘Money-medals, terrible.’ But I think everyone understands that to have that engagement, you have to be performing."

Olympic sports in the U.S. are run by more than four dozen NGBs that are, in turn, overseen by the USOPC. When the sex-abuse scandal erupted, the drawbacks of the loosely tethered relationships between the organizations were laid bare. The conclusion, driven in part by Congress, was that the USOPC, which provides millions in funding to the NGBs, needed to exercise more oversight over the NGBs and take a firmer role in policing them.

Friction came in almost every area.

Since 2019, the amount of money given by the USOPC to the NGBs for standard operating procedures has stayed virtually flat — hovering at around $50 million a year. Some of this can be blamed on the pandemic, which delayed the 2020 Olympics by a year and put a major strain on budgeting throughout the Olympic world. Another factor was the shift of USOPC dollars directly into the pockets of athletes. Also, there were “administrative” costs, some of which dealt with ongoing legal action involving Nassar's victims, and some that involved the increased oversight of the NGBs. At the behest of Congress, the USOPC also now funds the U.S. Center for SafeSport to the tune of $20 million a year, a more than 600% increase over when it was launched.

Somewhat overlooked is that a lot of money the USOPC gives to NGBs also eventually makes its way to athletes, who train under the umbrella of the organizations for years, then become part of “Team USA” — overseen by the USOPC — when the Olympics roll around.

Max Cobb, the CEO of U.S. Biathlon, acknowledged the growing tension between the NGBs and the USOPC. Cobb said 2022 is the right time to realign priorities, with the Paris Games still more than two years off.

“I think now is the time for us to dig in and have the really tough conversations and be really honest with each other about what we’re doing,” he said. “And be really transparent about how the funds are being used and what resources are available to us.”

—Some NGBs felt burdened by new auditing requirements put into place by the USOPC — a response to what was viewed as lax oversight in the aftermath of the Nassar case — that demanded extra work at extra cost for organizations that were already squeezed.

—NGB leaders balked at some of the athlete-centered programs the USOPC launched. One example is the Athlete Marketing Platform program (AMP), which gives athletes direct marketing opportunities with sponsors, but sometimes duplicates efforts being made by the NGBs themselves and effectively funnels money away from those NGBs.

—The sudden ouster earlier this year of chief of sport performance Rick Adams, a longtime leader at the USOPC, angered virtually the entire NGB community. Adams was the USOPC's main connection to NGBs on the sports side. The U.S. performance at the Tokyo and Beijing Games — first in medals for Summer and a respectable fourth in Winter — were good indicators that sport performance was operating efficiently despite the challenges brought by the pandemic.

Almost all of it eventually goes back to money — how to bring more into the Olympic system and how to distribute it, especially during a time of high inflation, where flat revenues actually represent diminishing buying power.

Lyons said she was heartened by a survey taken after the Tokyo Games in which more than 90% of U.S. Olympians and Paralympians in Tokyo said the “USOPC prioritized their health, wellness and security while providing appropriate resources and high-quality services throughout their Games experience.” She said the change in outlook signaled at this year's assembly doesn't mean the federation is going to stop concentrating on that.

“I've never seen an Olympian or Paralympian who didn't want to win,” she said. “I don't think we're going to see, from our athletes at least, some sort of blowback to say, ‘Oh, you know they’re talking about medals again.' Because they want to win medals.”