US Olympic speedskating coach back on ice after heart attack 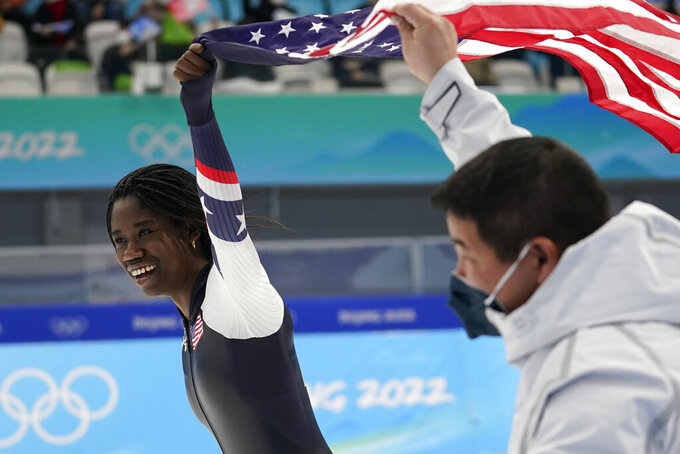 Erin Jackson of the United States holds up an American flag with coach Ryan Shimabukuro after winning the gold medal in the speedskating women's 500-meter race at the 2022 Winter Olympics, Sunday, Feb. 13, 2022, in Beijing. (AP Photo/Ashley Landis)

In a way, he remains the starry eyed kid who watched Eric Heiden beat the world at a strange sport in a glorious golden suit, setting the course for a quixotic journey that took Shimabukuro from the surf and sun of his native Hawaii to where he truly felt at home.

But things have definitely changed for the coach of the U.S. speedskating team since he felt a piercing, terrifying pain in his chest a few summers ago.

Having a heart attack in your 40s will do that to a person.

“I better live for today,” Shimabukuro mused, "because tomorrow's not promised.”

On Memorial Day weekend in 2019, he was on a camping trip in a remote area of Utah with family and friends, enjoying some down time between the end of one speedskating season and the start of another.

The group was packing up to head home when, suddenly, Shimabukuro felt a pain in his chest like nothing he'd ever experienced.

A friend in the group, who'd had a heart attack himself, suggested he go into town to get checked before the long drive home.

Three hours later, Shimabukuro was on a Life Flight helicopter back to Salt Lake City. The next day, he underwent surgery to put in a stent for a significant blockage.

"When they showed me the pre- and post-pictures, my heart was starving,” he said.

After talking with his doctor, Shimabukuro knew he had to make some changes in his professional life. He might not make it to the Beijing Olympics if he didn't.

“Obviously, I'm not invincible,” the 48-year-old coach said with a chuckle. “The one thing I was worried about: Was I going to be able to continue to coach at this level with the amount of stress that's involved?"

While Shimabukuro concedes he could stand to lose a few pounds, the heart attack was essentially caused by the all-consuming way he went about his job.

While undergoing rehab to build up his strength, he considered different ways of coaching. He had to find a way to get through to his skaters without putting himself at risk of another, potentially fatal heart attack.

A plan came together.

Before, Shimabukuro would often be at the rink until late at night, working on skates and dealing with other issues, big and small. Now, he leaves that to others to ensure he gets plenty of sleep.

He gave more responsibility to the athletes to keep up with their workouts and rehabs. He also asked them not to call at all hours unless it was a real emergency. If it could wait until morning, let's talk then.

At a team meeting, Shimabukuro laid out his intentions but also stressed to his skaters that "just because I may need to be different doesn't mean my motivation for success is any less. I'm still all in to get you to the top step of the podium.”

That has shown in Beijing.

The Americans earned their first individual speedskating medal since 2010 when Erin Jackson won the women's 500 meters. They added another medal Tuesday with a bronze in the men's team pursuit. With three days left to go at the oval, the U.S. still has hopes of winning another medal or two.

Shimabukuro's hours may have changed a bit, but he's still the same coach to his skaters.

“He's so passionate as a person and as a coach, he wants to be at the rink 24/7, doing everything, always taking on the entire load of the whole organization," said Joey Mantia, who led the Americans to their team pursuit medal.

“Now, I think he's got things a little more in perspective. And by no means does that mean he's not coaching to his potential or that it feels like he's any less of a coach. I think he's found a way to balance the coaching and being healthy and managing the stress of his life. We all love him. We want him to be healthy."

Shimabukuro coaches a team that includes three skaters — Jackson, Mantia and Brittany Bowe — from Ocala, Florida, where the climate isn't much different from his own home state.

He can certainly relate to the unusual path they have taken as former inline skaters who switched to ice to pursue their Olympic dreams.

“I think that helps me work with them,” Shimabukuro said. “I understand their struggles. I understand how difficult it is to move from a tropical climate when you don't have the facilities or program around you. You've got to move quite a ways away from home. I still remember that feeling.”

Shimabukuro has been hooked on the sport ever since he watched Heiden sweep all five men's events at the 1980 Lake Placid Games, an unprecedented feat unlikely to be repeated.

One image still sticks with Shimabukuro.

While his friends in Hawaii went surfing, Shimabukuro longed for the ice. At 15, he left home to pursue his speedskating dreams at a short track program in northern Michigan. He never went back.

Shimabukuro eventually switched to the big oval, hoping to make the Olympics as an athlete. He came up short of that goal, but coaching provided his conduit to the Games.

Shimabukuro has been a longtime fixture on the U.S. staff, though he did leave after suit and training issues led to a dismal showing at the 2014 Sochi Games.

He returned after the Americans managed a single bronze at the Pyeongchang Olympics, looking to rebuild a once-proud program that has produced more U.S. medals at the Winter Games than any other sport.

Even if they've changed a bit.