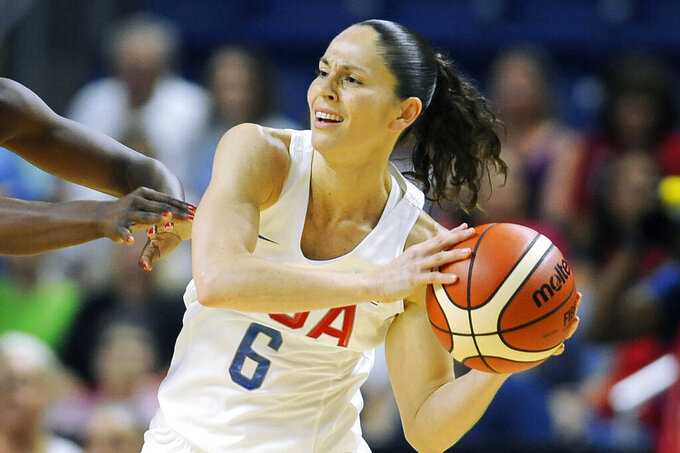 FILE - United States' Sue Bird, right, is defended during the first half of a women's exhibition basketball game against Canada in Bridgeport, Conn., in this Friday, July 29, 2016, file photo. Sue Bird and Diana Taurasi will try and become the first five-time Olympic gold medalists in basketball as they lead the U.S women's team at the Tokyo Games. The duo was selected for their fifth Olympics on Monday, June 21, 2021, joining Teresa Edwards as the only basketball players in U.S. history to play in five.(AP Photo/Jessica Hill, FIle) 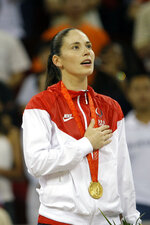 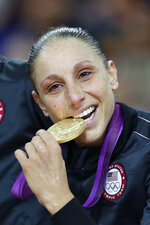 Diana Taurasi and Sue Bird will try and become the first players ever to win five Olympic gold medals in basketball when the United States women's team begins play at the Tokyo Games.

The pair has been an integral part of the U.S. run of six consecutive golds at the Olympics.

“As far as being named to a fifth Olympics, especially with Sue, you know, it’s just a great honor. It just makes you really appreciate all the people that have helped you,” Taurasi said. “You know, everyone, USA Basketball, that, you know, after being around for 20 years now, you know, it’s like a big family.”

Taurasi and Bird both played with Dawn Staley on the 2004 Olympic team. Staley helped start this unprecedented run with the 1996 squad and now is the first Black head coach of the women's national team after being an assistant for the last two Olympics.

“Any time that you represent USA Basketball, you’ve got the biggest target on your on your back, on your chest,” Staley said. “And everybody seems to play their best basketball.”

It's been 25 years of dominance for the Americans in the Olympics. They've won 49 consecutive games on the biggest international stage. No team has come within single digits of the U.S. since Russia lost in the semifinals of the 2004 Athens Games — the first Olympics that Taurasi and Bird played in — 66-62.

The Americans haven't dropped an Olympic contest since 1992 when they were beaten in the semis by the Unified Team. Only host Japan has beaten the U.S. in an Olympics, topping the Americans in 1976, the inaugural appearance of women's basketball.

If the women can capture another gold medal in Tokyo, they would match the U.S. men's team that won seven consecutive golds from 1936-68.

While there are no guarantees, it would take a monumental upset for the team not to come home with gold.

The competition for the other two medals is wide open with Australia, Belgium, France, Canada, Serbia and Spain all having a shot at reaching the podium. Serbia just beat France to win the Eurobasket championship.

The Olympics switched to three pools of four teams for the Tokyo Games. South Korea, Serbia, Canada and Spain are in Group A. Joining the U.S. in Group B are France, Nigeria and Japan. Australia, Puerto Rico, China and Belgium are in Group C.

Games begin on July 26 with the bronze medal game on Aug. 7 and the gold medal contest the next day to close out the Olympics.

Besides the U.S. team, many of the other countries are led by WNBA stars. Half of the Australian roster, led by Liz Cambage, is currently in the WNBA. The Opals are led by Phoenix Mercury coach Sandy Brondello. Some of the other WNBA players in the Olympics include Emma Meesseman (Belgium), Kia Nurse (Canada), Marine Johannès (France), Astou Ndour (Spain), The WNBA will be on an Olympic break from July 15-Aug. 11.

Nigeria will try and end a winless drought for African teams at the Olympics since the 2004 Athens Games. The African nation went 1-5 that year and no team from that continent has won a game since. There are hopes for that to potentially change: Nigeria went 3-4 at the World Champions in 2018, falling to the U.S. in the quarterfinals.

With the addition of 3x3 as a basketball discipline, teams are now only playing potentially six games at most in the tournament instead of eight. The last time the medalists played fewer than eight games was 1992. The 12 teams were put into three pools instead of two. The quarterfinalists will be the top two teams in each pool and two others based on a FIBA ranking system.