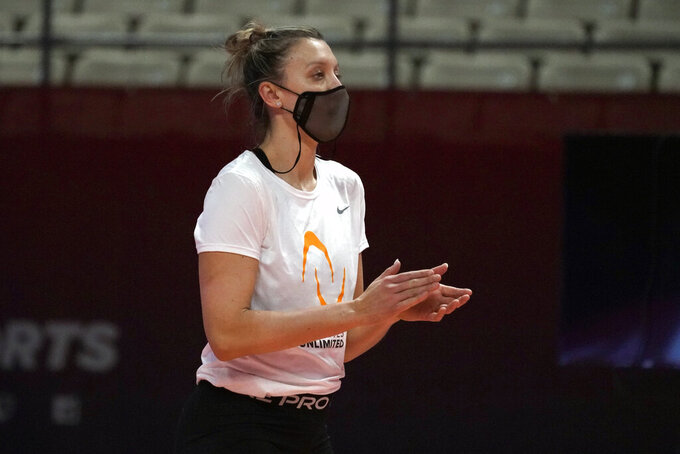 FILE - In this Feb. 24, 2021, file photo, Jordan Larson participates in a volleyball workout at Fair Park Coliseum, in Dallas. Larson was a player and coach while winning the inaugural championship of a unique women's professional indoor volleyball league focused on individual stats over team results. (AP Photo/Tony Gutierrez, File)

DALLAS (AP) — Jordan Larson was a player and coach while winning the inaugural championship of a unique women's professional indoor volleyball league focused on individual stats over team results.

The two-time U.S. Olympian might have a third role as a recruiter now that Athletes Unlimited has announced there will be a second season in 2022.

Coach Karch Kiraly believes more Team USA women's players could choose to play professionally in their home country, at least part time, and figures they'll reach out to Larson, Karsta Lowe and Tori Dixon to learn more about the five-week season that just ended in Dallas.

“I think this is an amazing opportunity,” Kiraly said. “We have been the only top volleyball country in the world without our own professional league. I think this over the long haul, five, 10, 20 years from now, is going to be a big benefit.”

Larson had never experienced a league where the players were in charge of drafting, the teams changed every week and the standings had the names of athletes instead of teams.

The 45 players were guaranteed $10,000, with the possibility of bonuses and a longer-term chance to share in league profits. For Larson, it was also a step in the process of trying to make a third Olympic team.

“I actually did a mini-season in China before and I was able to come back to the national team and kind of knew what I needed to do to get my body right,” Larson said. “And that was a lot of time spent in the weight room, and (I) knew that the season was going to be a lot of demand on my body with three games on the weekend and trying to recover one day and then really kind of gear up for the weekend next.”

Kiraly said the timing of the new league became interesting when the Tokyo Olympics were postponed from last summer to this summer. Instead of a year of reduced activity that usually follows the Olympics, 2021 turned into a year to gear up for the games.

“I wouldn’t say there were concerns,” Kiraly said. “I guess it heightened the meaningfulness and the importance of providing the best possible training and competitive environment for the people like Jordan and Karsta who are aspiring Olympians for this year and for our team. And I think Athletes Unlimited crushed it.”

The challenges of luring players from established leagues overseas are numerous, starting with salaries and including the preference of some to play in traditional leagues that last several months and crown team champions.

“To have this option is I think a wonderful one especially when it keeps on this path where it presents such a good experience in itself and also good preparation for things that are looming on the national team competitive season horizon,” Kiraly said. “I don’t know if it would be on a full-time basis, but to choose to do that once every few years I think would make a lot of sense.”

Athletes Unlimited co-founder and CEO Jon Patricof didn't say where the 2022 event would be held. He said Dallas was a consideration. Nashville, Tennessee, was supposed to be the site before a move forced by the coronavirus pandemic.

Patricof said the league was pleased by exposure generated through the CBS Sports Network and Fox Sports channels and on social media, highlighted by Facebook and Instagram. Broadcasts reached more than 100 countries.

Softball was the first sport for Athletes Unlimited last year, and the league is planning to return to the Chicago suburbs in August. The inaugural women's lacrosse league is set to start in July.