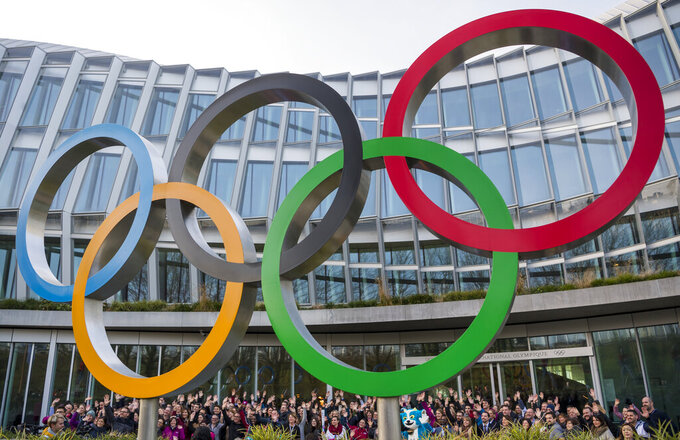 FILE - Young people pose behind the Olympic Rings during the Torch Tour ahead of the 2020 Winter Youth Olympic Games, in front of the Olympic House in Lausanne, Switzerland, Wednesday, Jan. 8, 2020. Instead of staking out a hardline position on the conflicts inherent in sending Olympic athletes to China, the leader of the U.S. Olympic and Paralympic Committee turned questions about the issues in the host country into a marketing pitch of sorts for America's own aspirations. (Jean-Christophe Bott/Keystone via AP, File)

Instead of staking out a hard-line position on the conflicts inherent in sending Olympic athletes to China, the leader of the U.S. Olympic and Paralympic Committee turned questions about the issues in the host country into a marketing pitch of sorts for America's own aspirations.

“The best thing we can do is offer the world outstanding opportunities to have games here in the U.S.,” USOPC chair Susanne Lyons said Friday when asked how the federation could use its leverage to resolve current problems in the Olympic world. “In Los Angeles and, hopefully, in Salt Lake City.”

It's a delicate dance with many moving parts, not the least of which is the safety of the 230-or-so American athletes whose dreams of competing in an Olympics, Lyons insisted, should not be subjected to posturing over the political climate in China.

And yet, all this came as the USOPC wrapped up a quarterly meeting that took place the same week as the $380 million settlement with survivors of former gymnastics team doctor Larry Nassar's sexual abuse. Peng says she also has been subject to abuse. Her whereabouts became a concern after she went onto social media and accused a former senior Chinese government official of sexual assault.

Because of that, the USOPC finds itself perched between the needs to show it listens to abuse victims and condemns what is happening with Peng but that it also appreciates not wanting to squander the chance for this year's crop of athletes to fulfill an Olympic dream.

“That said, it’s really impossible for any of us, particularly in the Western world, to really know what Peng’s state of well-being is,” Lyons said. “And of course, we are concerned for her. So we sincerely hope that anyone who has the ability to investigate her claims and ensure her safety will take steps to do so.”

Though Lyons would not say it, that could include the IOC, which says it has twice spoken with Peng but has not offered details about those chats and has since conceded it cannot offer any certainties about Peng's situation.

The IOC is the ultimate arbiter when it comes to awarding Olympic bids. The 2028 Games in Los Angeles will mark the first Olympics on U.S. soil in 26 years. It's a generation-long gap that can be at least partially attributed to the federation's tricky relationship with the IOC and might also inform the USOPC's decision to tread carefully on all issues related to China.

The future of the Salt Lake City bid also is tied to the willingness of Los Angeles to cooperate. The LA organizing committee now runs all the U.S. sponsorship deals, and adding a U.S.-based Olympics during the same window will take serious negotiating to ensure those contracts aren't diluted.

The IOC, meanwhile, is revamping its bid process, partly in recognition that the world's premier cities don't all see the chance to host Olympics as the great victory they once did.

Beijing was awarded the 2022 Games as part of a bidding process that boiled down to only two candidates: China and Kazakhstan.

China won, and the U.S., Great Britain, Australia and Canada are among the countries who have declared a diplomatic boycott of the Games. That's as far as any “boycott” is expected to go, and with both political tension and COVID-19 cases rising, the USOPC's main goal now is to get its athletes in and out of the country with no harm.

One part of that is refreshing the entire delegation about possible consequences of speaking up about these issues while on Chinese soil.

“The laws of China clearly are distinct and different than those in the United States,” CEO Sarah Hirshland said. “And it’s our duty and obligation to ensure athletes understand what that means and that the expectation is that we abide by the laws of that country.”